I was on a veterinary forum last night. They were discussing the “myths of raw feeding”. One myth they were sniggering at was that pets ever made it back into dry food. “Unsupported nonsense” were the words used. I dipped into my arsenal and sent them the below study. It’s a doozy, published in the prestigious American Journal of Vet Research. Nobody answered!

Ahhhh but sure this doesn’t happen anymore?!! OK, so now we’re accepting it has and we’re assuming that extra levels of control have been put in place to stop our dogs eating dogs (that have been put down with Sodium Pentobarbital, a chemical that does not degrade with cooking). 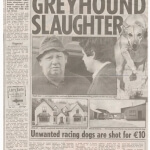 On 21 May 2009 the Irish Sun newspaper exposed Larry Earle, owner of a knackers’ yard and a licensed “meat seller”. Earle confessed to killing Irish greyhounds for €10 a go with a captive bolt gun. The piece highlights how you bring your dogs to his meat shed and leave them there. Just one rogue “meat seller” in Ireland, which of course he did not include in his big rendering vats out the back. He accepted the €10 as payment for killing the dogs then paid a vet or reputable disposal company €50 to take the body away.

What is Meat Meal?

Meat meal is a common ingredient in dry food. It is a byproduct of the rendering process. They stew up a load of animals at 121 degrees celsius and high pressure. Permitted to be included are animals that are diseased, road kill and left over grease. Like making stock the fat floats to the top and the protein sinks to the bottom. They scoop the fat off the top and use for your soap and what not. They scrap the grey goo off the bottom, dry it into a grey flour and sell it on as “meal”. Dry food companies include this meal in their products so they can say put succulent meat cuts on their labels and to boost the failing protein content of the their products (forget that this protein is of very poor value to the body).

If they only stewed up rotten cows it’ll be called “beef meal”. Chicken is called “chicken meal”. If it says “meat meal” in your dry food or treat it means they’re not sure what animals have been used to produce the grey powder that they use in their mix.

Of all of them, absolutely positively avoid “meat meal”. That said if your goal is to source the cheapest meat meals on the planet you will naturally source your meal ingredients from China, India and Thailand. So when it says “beef meal” on the label, and you don’t genetically test every barrel, then you’re taking quite a leap to assume that’s 100% what you’re supplier is giving you.

So it’s absolutely still clearly going on. You are all that stands between your pet and some terrible food stuffs. If you want to know what you’re feeding them then feed them whole ingredients. Here’s how to make your own dog food.

The Veterinary Nutritional Manual is Published by Colgate-Palmolive

Nettle effective at treating seasonal allergy in dogs – how to prepare

On Behalf of the West, I Apologise!