Meet Jenny Golsby of The Complete Pet Company, Maker of one of the First Freeze-Dried Raw Dog Foods…

I have just been sent a few samples of what is possibly the world’s first, truly-raw-but-freeze-dried raw dog food product. It is made by the wonderful Jenny Golsby in Australia. Jen is the owner of The Complete Pet Company, a company so ethical it puts the rest of us to shame.

I met Jen when I was speaking at Turrid Rugas’s Dog Symposium in Norway in 2015. Jen is a staunch believer in animal rights. Like myself, Jen struggles emotionally with balancing the needs of her dogs with the ethical treatment of meat animals. Her solution was to create a raw dog food based on ingredients that were hopping about in the open air. Honestly, her turkeys come from farms where they sleep in trees and music is played to them. If you got to eat meat, that’s where I want them living.

Three women had a vision, to create and manufacture the best raw, organic, natural, free-range dog food on the market. This dog food was not to be just any old dog food, it was created with an ethical stand against Factory Farming, using high grade, good quality ingredients to create a dog food that was not only delicious and nutritious but based on what nature intended.

The Complete Pet Company makes great organic and ethical-as-possible raw dog food products but, as most of us realise, sometimes raw can be a bit messy (travelling, storage, bit of handling etc). And some just won’t make the leap to a raw dog food product because of all the scares put into them by the dry food propaganda machine. This means there is a massive gap in the market for a dry-but-still-raw dog food. Enter Jen’s new concept – freeze dried raw dog food.

What is Freeze Drying?

If food contains water baddies can grow on it. Remove the water and baddies cannot thrive. Hence fresh food rots quickly. We have known this for millenia with early farmers air drying many items before storage, adding salt in later years (which further dessicates the area, thin-skinned baddies don’t like salt for that very reason).

Freeze-drying is a three-step process that begins with freezing. The food is placed in a vacuum chamber under very low heat and brought down to temperature. The frozen water crystals evaporate directly from ice to water vapour in a process called sublimation. There is then a  secondary drying step whereby any remaining water molecules are removed under slightly higher temperatures. The remaining very dry food is then nitrogen sealed for storage to prevent contamination from water or oxygen. It is the favoured way soldier and astronaut rations are produced. You add water and away you go.

What are the Differences Between Dehydrating and Freeze-Drying?

Dehydrating is a process of using just air (and thus water) removal. Many of us now have little machines for this in our homes for making treats and other smaller scale industries. It’s great. RawDry in Ireland, for example, make fantastic dehydrated Irish meat treats for pets, easily the best quality treat on the Irish market.

Both processes use gentle water removal and little to no heat in their process, vitally preserving nutrient quality, but as opposed to desiccation, freeze-drying uses a vacuum and has a couple more steps to remove any water present. The result is freeze drying tends to remove more water, sometimes prolonging the shelf life from a year to as much as 25 years! It’s rumoured freeze dried food might taste a little better and studies show that around 95% of the really groovy bits of blueberries are preserved with this process. In fact, studies show that freeze-dried foods retain more of their nutritional value than dehydrating, largely down to the fact it removes the water so quickly while dehydrating takes more time. That’s very good news, nutritionally speaking. For Jen, the added benefit for someone making a meal replacement is that it tends to be better able to do much larger loads, quicker.

Cold-pressed is a word we are hearing more and more in dry food circles. It is generally associated with the higher end pet foods (not the stuff sold in vets for some reason!). Cold-pressing is also about water removal but unlike dehydrating or freeze-drying, it uses both mechanical pressure (pressing, to remove water) and temperature (40-75ºC) to partially cook and remove water. The word “cold” is thus a bit of a misnomer, it’s not, but it’s a damn sight better than the punishing extrusion process which most cereal-based, kibbled pet foods are put through.

Why Normally-Extruded Petfood is the Worst Processing Method Imaginable…

Pet food extrusion cooking is very different. All the ingredients are mixed together under high pressure and very high temperatures (usually 121ºC for half an hour). Why is petfood normally produced this way? Lots of reasons, all to do with cost. It’s very quick and makes the most material in an hour. Moreover, you can use highly contaminated material such as stale wheat and rank meat ingredients and their “badness” will be cooked away. Unfortunately, as you would expect, this sort of cooking obliterates the good stuff. To explain why extrusion cooking destroys the nutrient content of food, here are a few paragraphs from my forthcoming book:

Most is not all raw dog food manufacturers are very aware what heat will do to the nutrient content of food. For example, there are the water-soluble and thus heat liable vitamins such as B complex (including thiamine, niacin, riboflavin and folic acid) as well as vitamin C. These vitamins are wimps. They hate everything, air, light but particularly heat. Anything from 40ºC really but by 70ºC they start to diminish rapidly. It’s why you always see many of these vitamins added in large amounts to dry dog food which has been positively pulverised with heat (121ºC) and pressure for 30mins. Lešková et al. (2006) found significant losses of (>33%) of the heat liable vitamins retinol, vitamin C, folate and thiamin during cooking food at just 100°C. Dry food is subjected to heat of at least 120°C for 30 minutes during the extrusion process and studies repeatedly show this process positively obliterates vitamin content (Björck and Asp 1983, Killeit 1994, Hoffmann LaRoche and Nutley 1995, Mooney 2010). In their review of the extrusion process, Björck and Asp (1983) noted significant loss of the heat-labile vitamins B1, B5, B12 and C in dry food. Mooney (2010) found that in all cases the concentration of vitamins in extruded petfood exiting the extruder and dryer were lower than target levels. Hoffmann LaRoche and Nutley (1995) noted a 34% decrease in carotene after processing, a 15% decrease in vitamin E after processing dry food at 110ºC for 30mins, which is significantly cooler than the temperatures used in normal dog food processing.

In this way, trying to factor in the effects of processing, transport, storage, time on shelves and the length of time the bag is left open by the client, is a very onerous task and, as the following studies show, it’s one they are yet to master, much to the detriment of the poor dogs trying to live on the stuff…

What Do Dogs Eat? by Conor Brady. Available 2018

I’m well aware of the need of such a product so I was really hoping the product would live up to expectations…..and I think it did! It arrives in ziplocks. Inside the product looks as you would expect, a dry meal, something like a finer muesli. The ingredients are “Certified Organic Chicken, Organic Fresh Fruit and Vegetables, Australian Hemp Oil 3, 6, 9, Organic Coconut Oil, Organic Chia Seeds, Australian Bush Honey, and Nutritional Supplement”. It smelled great. You simply add water, wait for a bit (don’t be expecting it to turn back into a chunky meat meal, it can’t do that, but it does turn into a thick soup). I gave it Duds. He loved it, I think, hard to say with him, he loves everything. While nothing can replace meat on the bone for a dog I think this is a very worthy second place option for those that need it. How much is it? It’s pricey guys. First of all her ingredients are the best in the world so that doubles your bill instantly, then you have this freeze-drying process which requires a special facility so Aussies will be paying $70.40 for a kilo of it and 1kg makes 4kg of food. So you’re looking at a food bill of $17.60 or €11/kg. So it’s not for everyone perhaps, which is a good thing Jen tells me. She can only make so much of it and they are completely out the door. 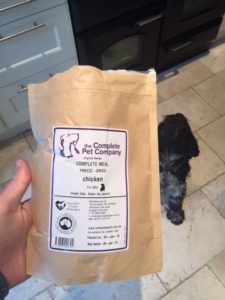 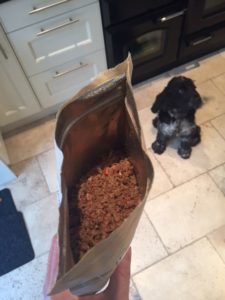 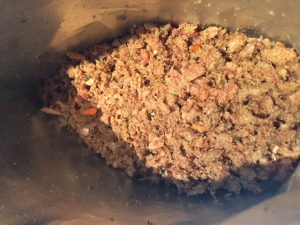 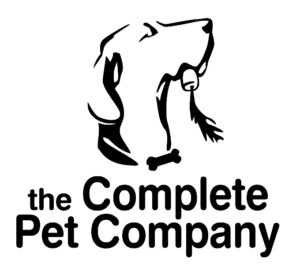 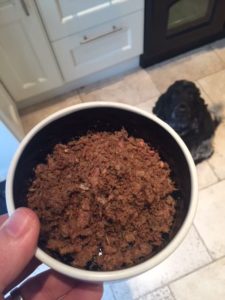 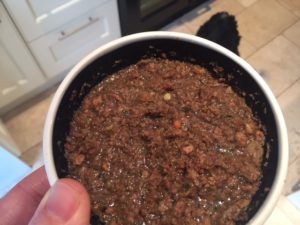 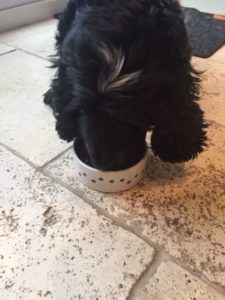 So What is Recommended, Processing Wise?!

It goes like this, in order of suitability for the dog:

If you want to learn more about raw dog food, follow the link!