I think many of you are now aware of the new scandal to hit dry food, this time it’s causing DCM in dogs, previously thought to be solely a genetic issue (like megaesophagus), such is the power of a grossly incorrect diet I guess.

The FDA is investigating the link between grain-free dry foods and DCM (heart disease) in dogs that are resulting in decreased energy, cough, difficulty breathing and episodes of collapse and death. The Washington Post reports that multiple veterinary groups, largely across the US, are now reporting cases of DCM in dogs consuming grain free dry foods, these are foods that avoid cereal as their cheap filler and use other carbs, in this instance peas, lentils, other legume seeds or potatoes as main ingredients. At least 300 dogs have been officially harmed, killing 10% of them. These figures are, as always, expected to be grossly under-representing the issue as most vets will not make the link.

Once again the problem is thought to be a taurine deficiency, a protein found in meat, though it’s not simply quantity per se…

The problem is, processed pet food has been guilty of taurine deficiency before. Numerous times. In the 80’s thousands of cats started going blind and dying. After a few years of this people realised that the taurine content was nearly absent, a result of manufacturers using little to no meat in their foods, as well as the effects of processing denaturing the remainder. The shock waves from that scandal are still felt today with cat owners thinking they have to supplement their raw cat food diets with taurine. They don’t. Once your cat is eating a meat-based diet, particularly one contains some chicken, fish or liver, they have all the taurine they need by a considerable degree.

However, the problem here in dogs is not simply taurine quantity per se. An excellent piece by Linda Case goes a little deeper into what’s going on here in dogs. I have selected some key phrases from her article which you can read here;

Taurine has many functions, but two that are important for this discussion involve its role in normal heart function and its presence as a component of bile acids, which are needed for fat digestion. Most animals obtain adequate taurine to meet their needs by producing it endogenously (in the body) from two other amino acids, methionine and cysteine. Animals require taurine physiologically, most do not have a dietary requirement for taurine. The exception to this rule is the cat. Cats (but not dogs) always require a source of taurine in their food. If they do not have it, one of the diseases that they can develop (and possibly die from) is……you guessed it…..DCM. Taurine-deficiency DCM is well documented in cats. We also know quite a lot about the dietary factors that contribute to this disease in that species. In contrast, dogs (usually) do not require a source of dietary taurine. However, we know that some dogs still develop taurine-deficiency DCM. Why does this happen?

Linda goes on to explain that while taurine in used in bile which is excreted at the start of the intestinal tract, animals are generally excellent at recovering this taurine down the line by reabsorbing the bile salts and thus not wasting the taurine. However, certain ingredients (certain fibres such as rice bran, cellulose and beet pulp, for example, are shown to reduce taurine availability in pet food) and processes (high-temperature cooking degrades protein and forms complexes that are resilient to digestion, feeding the wrong bacteria further down, bacteria than like to eat taurine), used in pet food can bind to bile salts and render them unavailable for reabsorption. They are instead poo’d out and the animal, over time, can become taurine deficient. Couple this with reduced meat inclusions and taurine deficiency becomes more likely. When this is coupled again with certain dog breed dispositions to DCM (Cavalier King Charles Spaniels, Dachshunds, Miniature and Toy Poodles, Doberman Pinschers, Boxers, Golden Retrievers and Miniature Schnauzers) and possibly larger body size, you’re asking for it, particularly when authors note these legume-containing products are tested largely on 8 caged beagles and information for life-suitability is extrapolated for “the average dog” which in this case can be twice the size.

Linda makes a great point that while the presence of high pea or legumes in “grain-free” foods will further cause taurine absorption issues, we should be focusing on them alone. There are more things at play here than just that and thus a focus on simply “grain-free” products is not helpful and possibly misleading. We must keep the bigger picture in view.

The industry loves to say it is responding to “trends”, but it’s doing no such thing…

The Washington Post article quotes Joshua Stern, a veterinary cardiologist at the University of California at Davis which is at the forefront of revealing this new scandal;

Dog food trends may track with pet owner tendencies. Stern likened grain-free dog food to the cave man diet for humans. “As the push for raw ingredients and organic growing grew in the human market, it similarly grew in the pet market,” he said.

It’s absolutely clear the market is moving towards more biologically appropriate ingredients for their pets which for cats and dogs means a move away from cereal-based processed gunk and towards meat items for their pets, ultimately, towards a raw dog food diet. However, the pet food industry wants to keep the highly profitable, cereal-based market alive and kicking for as long as possible. So, rather than simply supplying us with ideal fresh meat-based products, the pet food industry issues clever statements, indicating that they are responding to “trends” in the pet food market by bringing out these new little stopgap products for us, products that look something like a better choice for pet owners. They swop terrible food items like wheat and corn in favour of other cheap, high-carb and nearly as bad fillers like rice, potato, peas, lentils and tapioca. They then label them “grain free” which the market mistakenly believes is a more “paleo” diet for dogs. It’s not in the slightest. 60% carbs (i.e. 60% sugar) is nowhere near a “paleo” diet for them. Dogs have zero requirement for carbs. None whatsoever. Such diets pose a serious health risk for pets being fed on such a substrate (obesity, pancreatitis, kidney disease, to name but a few).

Look at this highly-processed, dry food kibble below containing approximately 50% carbs from peas and potatoes. They managed to get the words “natural” on there, “whole-earth”, “healthy” and “goodness from the earth” all on the front of the packet! 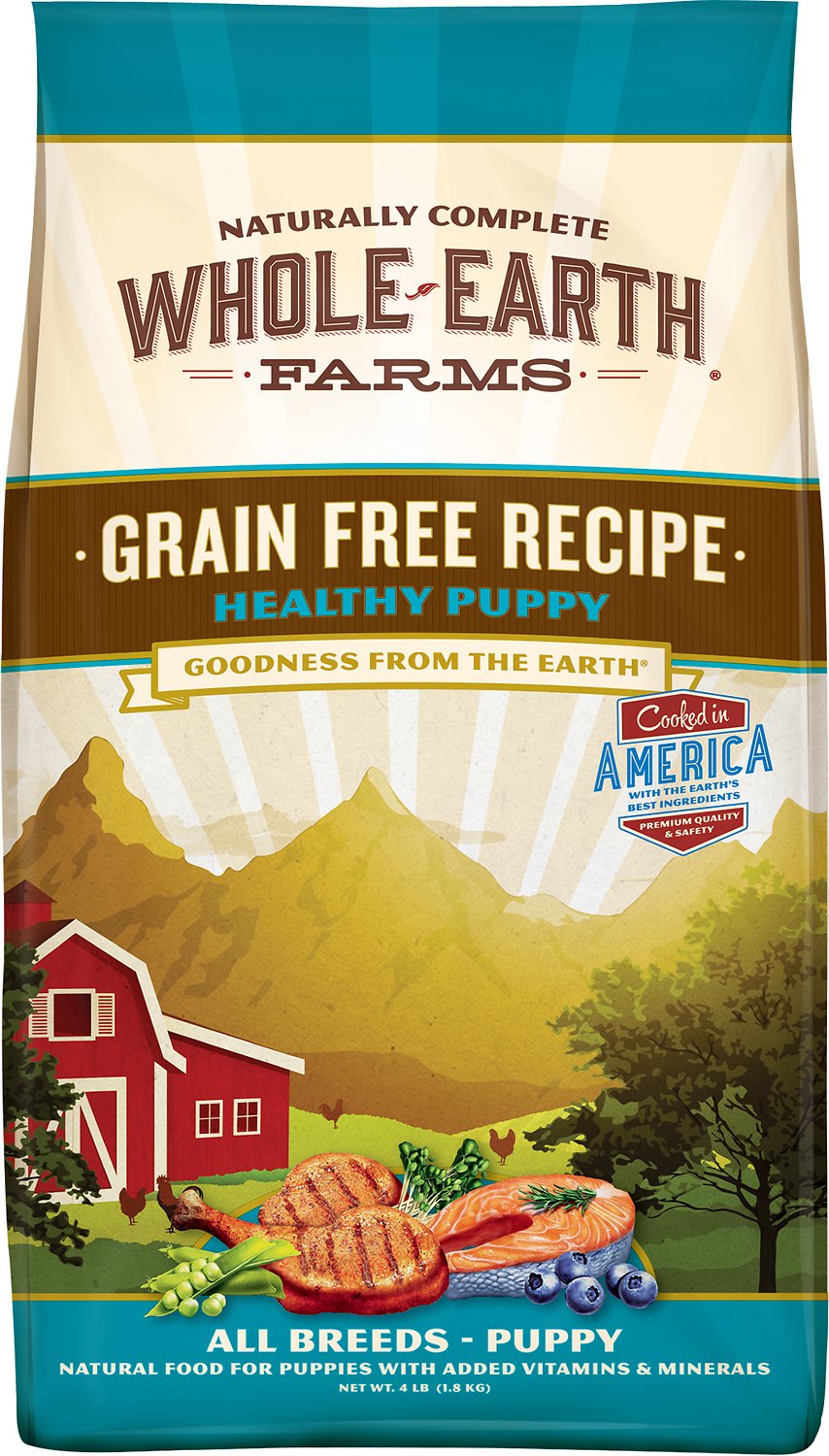 “Natural” pet food now makes up more than a third of the UK’s £940m industry, while grain-free food accounted for 15 per cent of the market. If you are feeding these foods guys please stop. Asides being a waste of their health they are a waste of your money when raw dog foods cost the same. Here’s everything you need to know about making the transition to biologically appropriate raw dog food.

In the meantime, and in relation to DCM in dogs, if you’re shopping for dry pet foods, please take the following advice into account:

If you are using these foods, particularly in breeds prone to DCM you need to supplement them with some fresh ingredients including some raw chicken, fish (even a tin of sardines) or some organ meats like liver, kidney and ideally heart of any animal.

That aside, know that there are better grain-free dry foods out there that use some ingredients such as sweet potato but to a considerably smaller degree, perhaps 20% instead of 60% say, using more meat. These are far better options though can cost that bit more as they replace cheap filler with meat options.

Unlike human food they’re not required to quote the carb content on their foods, it wouldn’t be good for business and the powers that be aren’t about to intervene in that. To get an idea of the carb content of your dry food of choice simply add up what you are told, the protein content (say 20g per 100g), the fat content (say 15g per 100g), the moisture content (say 10g per 100g) and the ash and fibre (say 5g per 100g). You then subtract this total figure from 100 to get an approximate carb content of 50%. In my opinion, at a minimum you should avoid all dry foods containing more than 25-30% carbs and these carbs should come from slower-to-digest options sweet potato or oats, or simply go for meat-based dry foods, if you have to feed them dry, for whatever reason.

Here’s a great example of prime BS from the pet food industry, this time explaining why your dog needs lots of carbs and little protein in their diet!

Where does the meat come from in your dry food?

What is a researcher? I’m not sure anymore…

Important Notes on Thiamine (Vit B1) for Dry and Raw Feeders…