Why is There is so Much Pancreatitis in Dogs?! The Answer is Diet…

Pancreatitis is inflammation of the pancreas. If it starts to malfunction as a result, with digestive juices leaking out into the surrounding tissue, the result will be acute pancreatitis in dogs. This is extremely painful as the body begins to digests itself. Pancreatitis in dogs and cats is all too common a feature and is almost certainly a result of dry feeding 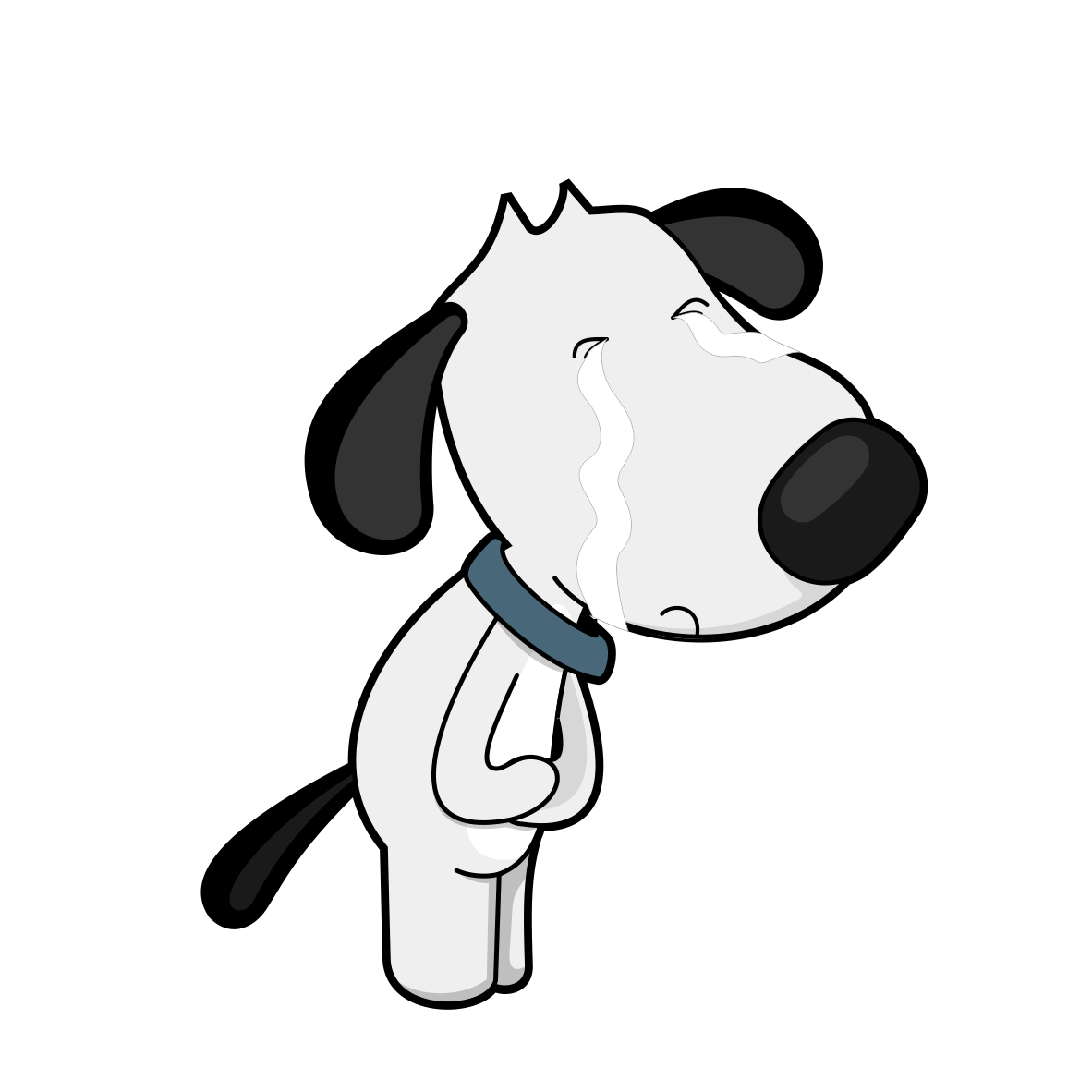 Types and Symptoms of Pancreatitis

Pancreatitis in dogs can be either acute (rare) or chronic (most likely). Acute pancreatitis is a crippling painful disease whereby abnormal pancreatic function causes the release of digestive enzymes into the pancreas, surrounding organs and tissue. Essentially the body starts to digest itself. At this stage it is termed necrotising pancreatitis. It has a sudden onslaught and without rapid veterinary intervention and aggressive treatment your dog is unlikely to survive.

Chronic pancreatitis takes time to develop and is thus more likely to occur in animals two years and older. It is characterised by an inability to secrete digestive enzymes. Symptoms will not appear until 85–90% of the pancreas is shut down (Ettinger et al. 1995). Fewer enzymes mean less fat and protein being digested. These undigested fatty acids in the gut causes the diarrhoea which is yellowy-grey and oily in nature, typical of this disease. Symptoms are not as violent as in acute pancreatitis and are associated with the lack of digestion, including weight loss, poor hair coat, flatulence, increased appetite, coprophagia (poo eating as a result of nutrient deficiency coupled with the more nutritious stools) and diarrhoea. 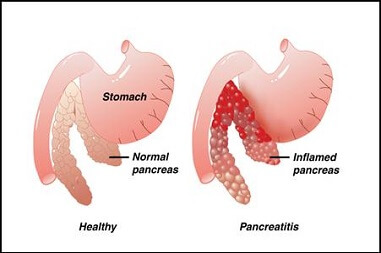 Prevalence of Pancreatitis in Dogs and Cats

In a study of 73 dogs presented for post-mortem examination, 64% of pancreata displayed evidence of chronic pancreatitis (Newman and Woosley 2004). The very same is seen cats. Examination of 115 feline pancreata from healthy and sick cats found pancreatitis in 67% of cases, including 45% of apparently healthy cats (Owens et al. 1975, Macy 1989, Steiner and Williams 1997, De Cock et al. 2007). Dogs and cats suffer pancreatitis to a disgracefully large degree, 25 – 50 times more than as is seen in humans (worked out from rates of dog pancreatitis in Panagiotis et al. 2008). This is as much unnatural as it is disgraceful, considering how painful the issue is for the animal.

The Likely Cause of Pancreatitis in Dogs

Genetics is thought to play a role. For example, German shepherds can constitute up to two-thirds of Exocrine Pancreatic Insufficiency (where the pancreas is unable to produce enough of a specific enzyme, Kim et al. 2005), with rough collies, Yorkshire and silky terriers, dachshunds, miniature poodles and cocker spaniels also noted to be at risk. However, genetics does not explain the shockingly large amount of pet cats that suffer pancreatitis, pedigree inbreeding being less of an issue here.

Genetics aside, a lesser known cause of pancreatitis is injury to the mid-back (where the thoracic and lumbar vertebrae meet). This is an energy point here that supplies both the stomach and the pancreas. To check for an issue here, you don’t need an expert. You simply need to prod around where you see the last rib is coming from as it’s attached to their last thoracic vertebrae, it then becomes the lower back (lumbar vertebrae). There will be discomfort when you hit the spot. Injury or stress here is also thought to be a predisposing factor for bloat. 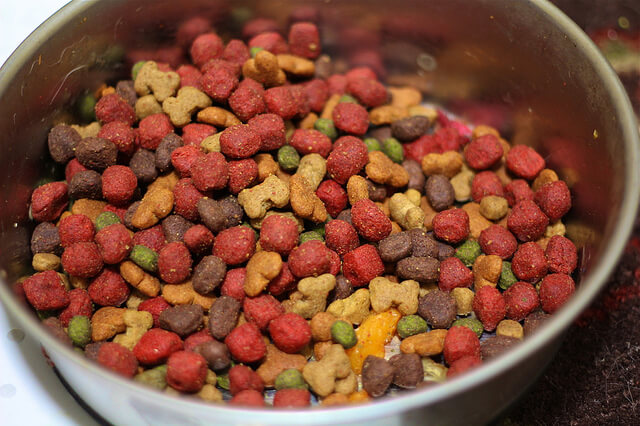 While unproven, gross over-vaccination is also suspected to play a role. If your dog has suffered a bout of pancreatitis take a look at when his last vaccination was. Sometime in the last month?

These factors aside, pancreatitis has a strong nutritional basis, certainly in human nutrition so it follows that it must play a role in dogs too. As 9/10 of our dogs today are fed dry, cereal based food it is most certainly the chief suspect. Specifically it is the effect of a high carbohydrate diet in a carnivore.

Why Dry Food Causes Most of the Pancreatitis in Dogs..

Amylase is a digestive enzyme in the saliva of omnivores and herbivores which assists the break down of plant carbohydrate. When we eat a piece of bread digestion thus begins in the mouth. This bolus of food makes its way down to the gut for digestion and on to the duodenum where the pancreas releases yet more amylase to break all the carbohydrate down into sugar.

On top of this, the pancreas must now uncharacteristically produce enough insulin to balance the soaring blood sugar. 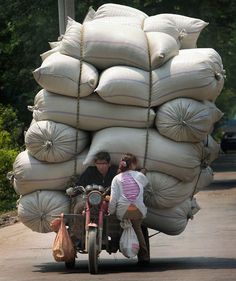 Couple this with the well-established fact that cooked, processed meat, void of the enzymes present in raw meat released from lysed cells during chewing, is highly indigestible. The pancreas now has to release more ribonuclease and deoxyribonuclease to get the job done.

All this every meal. Every day of the dog’s life. This is massive stress. You need to think of your dog’s pancreas like the scooter’s engine in the picture opposite. How long do you think that engine will last? The dog’s pancreas is now working to the point of exhaustion. And stressed organs will eventually complain (become inflamed).

In absence of the data, and considering that we have not purposefully selected and bred these animals for this debilitating trait, few could argue this is normal for dogs and cats.

Once it sets in, pancreatitis will result in a vitamin E deficiency (Kalvaria et al. 1986). Vitamin E’s primary role is as an antioxidant, mopping up excess fats in the system. As the failing organ struggles to break down fat in the diet, more vitamin E is required from the diet to clean up excess fat. But vitamin E, normally included in all dry dog foods at “the minimum required for growth” unless otherwise stated, and which is proven to reduce in dry foods by 30% after just six months’ storage (Hoffman La Rodue 1995, cited in Hand et al. 2003), is expected to be in short supply in most dry foods as a matter of course.

As dry fed dogs receive in the way of fresh nutrients, thus begins a vicious circle. Fat builds in the blood, increasing pressure on the pancreas for lipase. One more load of fat and things are likely to snap in a bout of excruciatingly painful acute pancreatitis. This is the likely route to the “piece of fat from your steak” scenario and why, ridiculously, many vets today warn of the dangers of table scraps. Dogs are carnivores, they eat protein and fat, they are experts with its digestion. One piece of fat from your steak will not harm a healthy dog enjoying a healthy diet any more than it will you.

This is before we consider how gluten allergy can exasperate this condition.

Take me to Pancreatitis in Dogs Part 2 What to Do