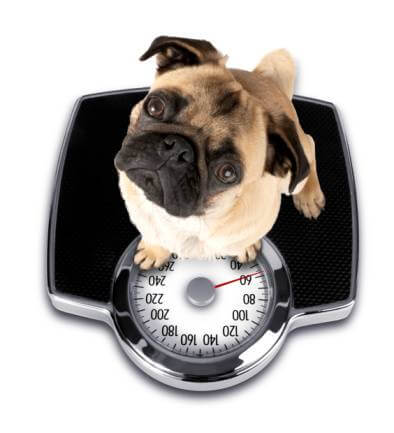 [I use a lot of references in this article folks. Some key ones are available below. The rest are available on request].
Obesity figures are soaring in dogs, from approximately 22% of the dog population in the 1980s (Edney and Smith 1986, Donoghue et al. 1991) up to around 50% of dogs in Western countries today.
In December 2010, a study by MORE TH>N Insurance Company found over half of the cats in Britain will be too fat for the standard cat flap within the next ten years. Incidentally, in response to this trend, MORE TH>N developed a larger cat flap – The Fat Flap! It is twice the size of the standard cat flap, equipped with a conveyor belt to an automated door with paw recognition software. Seriously.
This would be funny if the health implications weren’t so serious for your pet. Fat dogs suffer more disease, get lame sooner, cost you more, live shorter lives. Luckily, as they only eat what we offer them, there is an easy solution (and no, it doesn’t come from a packet, that’s part of his problem…)

I’m Dr Conor Brady, a canine nutritionist with a lot of experience getting dogs in shape. It’s easy. Below I tell you what I know. How do I benefit? For the most part, articles like this get folk on to my site and it gets me some attention. If you need specialised help you can book me for a consultation. Also, if I link to a product that is important for his recovery, I will track the link. If you buy it I will get a tiny bit of that sale. 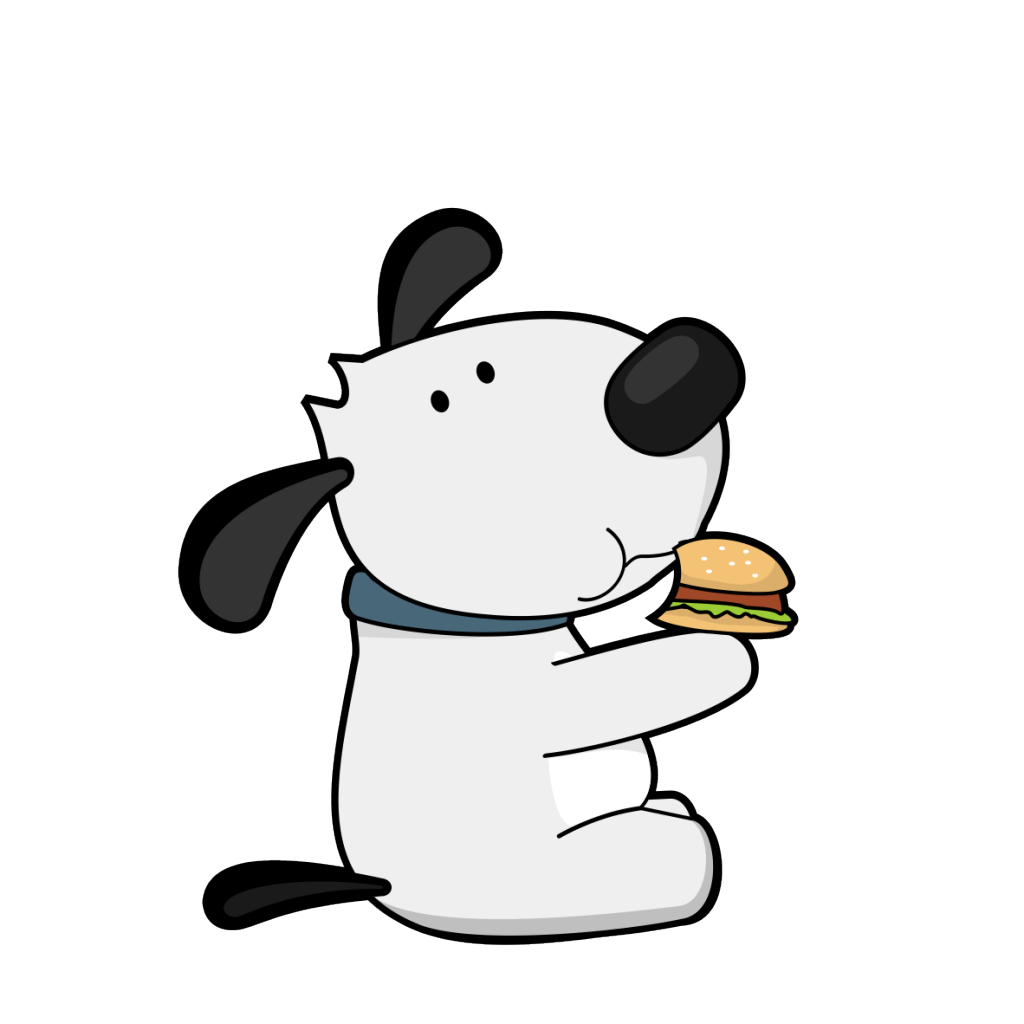 A Fat Dog is as Healthy as a Fat Child

It is not surprising that obesity causes the same health problems in dogs as it does in humans. The excess energy from fat stores, fuels growth in young dogs at maximal rates – as opposed to optimal. Their bodies cannot withstand maximal growth rates for long. Coupled with the greater load to carry and you get orthopaedic disease and ruptured cruciates.

Specifically, in relation to labradors, it has been shown that elevated energy intake (via ad lib feeding) increases the incidence of skeletal disease, hip dysplasia and osteoarthritis (Kasstrom 1975, Kealy et al. 1992, Hazewinkel 2012 cited in Fascetti and Delaney 2012).

In the most extensive and controlled study of its kind, Lawler et al. (2008) housed 48 labradors, all born around the same date, for the entirety of their life. They randomly split the group in two, overfed one group and fed the other group 25% fewer calories. In this study, major lifetime observations included 1.8 years longer median lifespan for the diet-restricted dogs and the delayed onset of late-life diseases, especially osteoarthritis.

So there’s never a time for a dog to be fat (or kids for that matter). Unfortunately, this simple fact has not yet filtered down to many dog owners. In a survey of 1,104 American pet owners, 356 (32%) reported that their pets were overweight or obese but, incredibly, only three people considered this obesity to be a health concern for their pets (Freeman et al. 2006).

Four Main Reasons for all the Fat Dogs…

A dog is likely to be overweight for three reasons:

1. They are being fed a diet consisting of 50-60% carbohydrates

Most dry fed dogs are eating diets crazy high in carbohydrates. You would never go the gym and expect to slim down on such a diet, so why do you think your dog should?

Worse, dogs are meat eaters. Their normal prey animals are mad of lots of protein and a little fat. Carbs are not required. This modern food stuff  is very contrary to what a dog would normally eat, given the chance.

If your diet consisted of 60% bread you’d put on a bit of weight too!

This type of meat is usually for an incredibly low price which meats do not normally cost. How do you think they are able to charge these low prices? One way is by finely grinding carcass and selling it as “meat” (buyers do not easily notice the difference). However, the common way is by using fat and blood as the main constituents (this looks exactly like minced meat).

3. The dog is not as active as usual (getting old, injured or bad weather) and is being fed too much food for their activity level’s

It is important to keep an eye on your dog’s activity levels and adjust their dietary intake if they have slowed down for any reason. It is also worthwhile paying attention to how many treats they are given as to many can lead to an increase in body weight.

Neutered dogs retain more fat due to hormonal disruption, mainly the removal of testosterone. We strongly advise not neutering dogs until they reach sexual maturity. For more on this please check out our successful article on neutering dogs.

Please ignore your vet on this one. Dry food is one of the worst foodstuffs out there for a carnivore, second only to “light” dry food. What they have done is bulked the normal kibble with indigestible plant cellulose, often by reducing the protein content further (as it is cheaper for them to reduce this component than the fat-causing but carbs portion). This is similar to a runway model chewing tissue paper to feel full, without adding calories. All this does is make an already nutrient defunct food even worse. This method of weight loss will make the body run dangerously low on good quality protein and energy, reducing muscle mass and slowly destroying the health of the patient over time.

Muscle mass is not the weight you want to lose. The most important thing is retaining lean muscle mass whilst reducing the fat. Think of a human gym goer. They tend to focus on lots of fresh protein (meat and veg) for building muscle and reduce their carbohydrate (cereal, pasta etc), which is fast energy. Unlike protein as such, excess carbohydrates can be stored as fat. This is the way omnivores should do it. Your dog is a carnivore so their need for meat and no carbs is even greater.

For all these reasons, dry food, particularly “light” or “low calorie” or most odious of all “metabolic dry food” which is magic dry food for fats dogs sold to you by vets under the guise of “prescription” when it doesn’t contain a single medicinal quality (but demands a much higher price tag all the same) and the science is very firmly behind this statement.

Know what makes this worse? They know this isn’t the best way to diet dogs, they’re just greedy scum, but how come our vets are falling for it hook, line and sinker??!

Fat Dogs, What To Do

Dogs are meat eaters. All they should be eating is raw dog food, which is lots of protein (meat) and a little fat. It’s very important for those two components to be the main parts of their diet. With this in mind, carbohydrates need to be cut from their diet and the intake of fresh protein needs to be increased. In other words, feed them a lower calorie diet consisting of lean, fresh meat. Easy!

They do not need to eat less food packed with indigestible plant fibre, as it will starve them of vital nutrients. Feed them good sized meals that are slightly lower in calories. Remember, losing weight does not have to be hellish.

This high protein, low fat, zero carb approach will reduce fat stores slowly, while at the same time retaining the lean muscle mass underneath, which is vital.

Recommended Diet for A Fat Dog

Remember, fat dogs should be permitted to eat as much food as is appropriate for their body size, just like their leaner counterparts it’s just that the mix needs to be lower in calories. That’s the secret. The poor thing doesn’t need to go round hungry and scavenging. A suggested diet is as follows:

Find your chicken or turkey in local supermarkets (keep an eye on the reduced price aisle!). Or, if you don’t want to make them yourself buy a pre-made meat mix. I’m long enough in the pet food world to know that I don’t actually buy dog food anymore. I now buy my stuff from butchers and make it myself. For treats use baked lean meat (such as a crown of turkey, chicken breast, duck hearts).

Feed 2.5% of their body weight per day, less if they don’ need it. Best they go 16hrs without a meal. One meal a day may be best.

More on making your own raw dog food diet here. 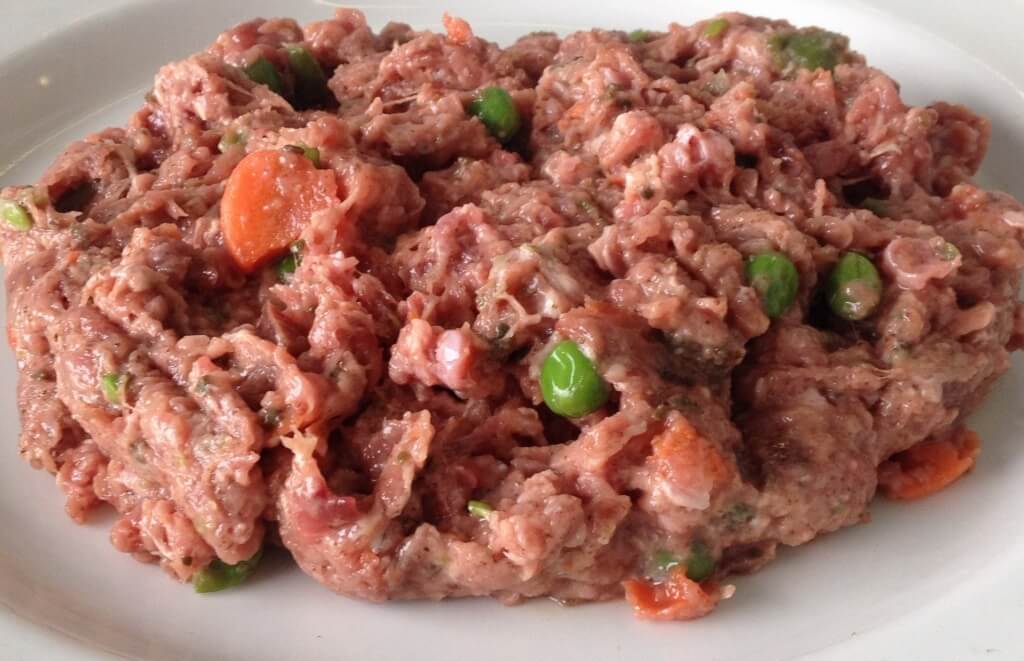 What NOT to Feed Obese Dogs

Ease off the red meats. Beef, duck, pork. Tend to be fattier.

Most treats: No more dental sticks. No more rawhide chews (these are skin which is pure fat). And while we love raw meaty bones careful with fat dogs as raw meaty bones tend to have a lot of fat (butchers don’t make money by dumping meat!).

More here on what not to feed dogs!

– Walks: Fat dog’s do not need long walks. The obesity that is destroying their health and shortening their lives, is already ruining their joints. Long walks speed up this process, so shorter walks but more frequently are the key (15-20mins).

– Swimming: To keep the pressure off their joints as they lose weight they can go swimming. Simply stand on the other side of the pool with a healthy treat such as a carrot.

Other Tips for the overweight Dog

Pick up a cloth measuring tape and run it around their stomach (behind the rib cage, as the diagram on the left is demonstrating). Record the measurements each time this is done to maintain a record of their dimensions.

Keep a record of the dog’s weight. If they are not losing weight after a week, then reduce the amount fed to them by 10%.