What is Gum Disease in Dogs and Why Does my Dog Have it...?! 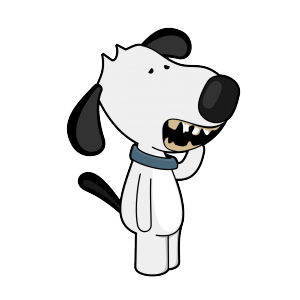 Gum disease in dogs is bad news and it’s not simply what you see (and smell) on the surface that’s so worrying, it goes much, much deeper than that. You really want to avoid this happening in your pet. Still, 9/10 dogs have gum disease by three years of age. This is a shocking stat. Gum disease is a painful, immunologically-destructive disease of the mouth. How has it suddenly become a normal occurrence in dogs?  Below we take a look at this question as well as give you some simple, low-cost natural therapies to both reduce the tartar on their teeth and avoid gum disease in the future.

I’m Dr Conor Brady, a canine nutrition specialist. Below are lots of tips to get your dogs’ teeth back in good shape. If you need some 1-1 time, you can book me for a consult.

Some Terms you Will Hears When Discussing Gum Disease in Dogs…

Plaque is the term used for the invisible layer of bacteria that live on our teeth. Regular brushing (or abrasion from tough foods) tends to keep this in control.

Then you have tartar. This is a very hard, yellow layer on the teeth. Essentially this is what happens if you leave the bacteria unmolested and feed them (carbs / sugar). They bed in, building their little yellow fort-like base.

Many just think it’s just the yellow teeth that are effected, a bit unsightly for the painful but it’s much deeper than that. Like the proverbial ice berg what you see on the surface is just the beginning. It’s no coincidence they build their tartar-fort by the gums as the gums are rich with capillaries and this bacterias’ sole mission in life is to invade the blood. You definitely don’t want this to happen as the blood provides direct access to the heart and brain. No surprise then that the body (via the immune system) takes these potential little invasions very seriously, and releases the troops.

The troops (anti-bodies) rush to the point of invasion (the gum line), swelling the area, which is uncomfortable for the patient, and then the battle between good and evil begins. As with all battles the surrounding area is affected which further increases the soreness for your dog. You will know this as gingavitis which is the latin for gum (ginga) disease (itis). 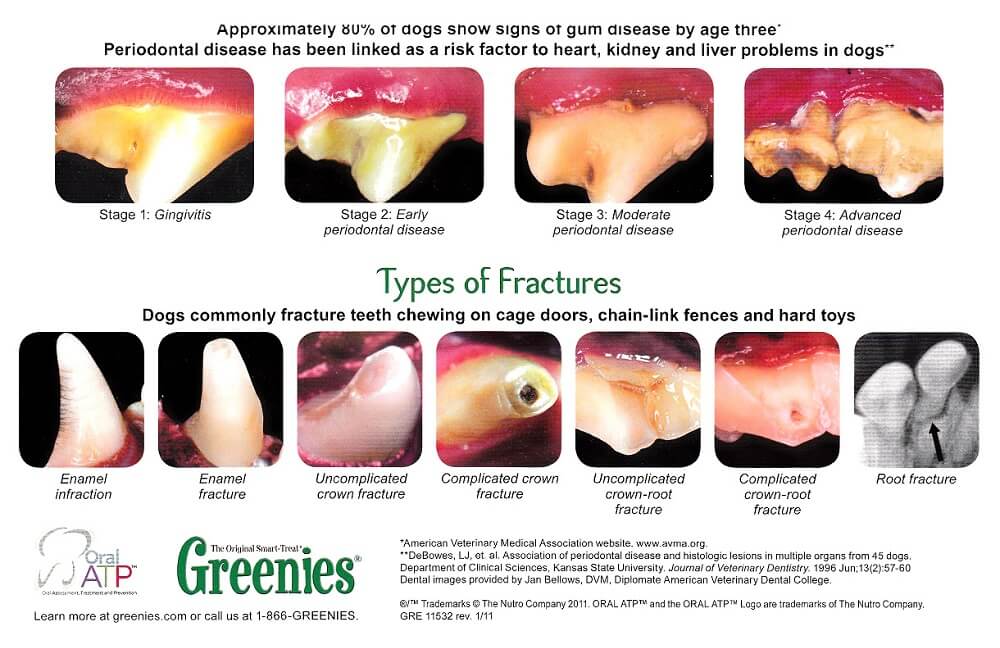 Gum disease is visible as the dark red line on the gums just above the teeth (see pic above). It’s a chronic condition, meaning it builds up insidiously in the background, wearing the body down (i.e. exhausting your immune systems strength and damaging the gums and teeth therein).

Side Effects of Gum Disease in Dogs

If gum disease is allowed to progress and build in strength there will come a time when your body’s efforts are no longer enough to keep this invasion at bay. Cracks appear in the gum line and the baddies rush in. Daily. Now you’re in real trouble. Some baddies start getting into the blood and begin to move around the body causing inflammation in more worrying places such as the blood vessels, kidneys, heart and brain. The body freaks out and reacts ferociously, sending out the SAS to clear up the problem. As with all strong military replies, the damage to those areas can be severe.

This is why numerous studies in dogs and humans link gum disease directly to pulmonary heart disease. Studies also directly link gum disease to kidney disease, as the poor kidneys have to filter all the “immuno-debris” that results from the daily battle at the gum line. Like a traffic jam on a motorway, the little tubules in the kidneys can become blocked leading to major problems. All the while your body’s system is run ragged trying to defend from the invasion resulting in a very significant depletion of immunity, allowing other diseases more reign to propagate. Oh and his breath will stink, termed halitosis (which is essentially bacteria farts).

What is the Cause of all This Gum Disease in Dogs

Incredibly, it seems at no point have vets wondered was diet fuelling the problem in dogs, as it does in humans?! I mean why would dogs be any different? This is one of the best examples of the dearth of nutritional knowledge in our vets today. It would be funny if the pain and health implications for the dog are very serious. Dry food is the cause of the majority of gum disease in dogs. It offers no abrasion for teeth, also carbs therein fuel plaque growth because dogs as carnivores have no amylase in their saliva. This is an enzyme that clears carbs (i.e. sugar) from their teeth. Thus sugar remains to fuel plaque growth. A no abrasion-plaque fuelling double whammy.

Facial arrangement and old age too can play a role but they are almost insignificant in comparison as raw fed dogs (and dingos, and tigers, and all wild carnivores, and cavemen) have pearly white teeth.

The Solution to Gum Disease in Dogs

So we know dry food is out. Another one to look out for and positively avoid are the various pet store treats claiming to be dental sticks. Most if not all of these contain sugar. To clean teeth. Without it present (and the copious amounts of salt) dogs wouldn’t go near them. Dental sticks, they look like a bone, taste like a bone, are often as hard as a bone but VITALLY is not a bone!! And there should be no need for toothbrushes, how did it get that bad?!

In only the most serious cases of gum disease and tooth erosion would I ever recommend putting a dog under general anesthetic for a scrape. It is pointless and dangerous for small, old and sick dogs. There is a better way…

The cause of the majority of the gum disease in dogs is dry food as the issue evaporates on a normal, biologically appropriate fresh dog food diet. Ideally feed meat on the bone though any coarsely-minced product for dogs will be fine, particularly if you’re doing Step 2!

Bones are the dog’s natural toothbrush. Give a dog a bone. Fit as a butchers dog. Remember those sayings?! Your dog needs meaty bones, here’s a nice article on how to feed bones safely.