Top 10 Tips for Itchy Dogs Before You Call the Vet Part 8/10: Dog is Constantly Itching? Try Some Salt Therapy…

I know, this sounds a bit strange initially, but bear with us a second. First off, we’ve had some success with this. Secondly, it’s a really simple process, very much a fun and interesting home-experiment, so why wouldn’t you try it? Thirdly, there’s some good science behind why it works. So, if your dog is constantly itching, salt therapy is certainly I’d be trying in the background whilst trying to get the diet right (and making up my home remedies).

I thought salt was bad for you…

That’s not quite right. Like most things, too much is bad for you, certainly too much refined salt (from processed food consumption), that’s for sure. If we humans eat 9g of salt instead of our daily recommended max of 6mg we definitely die younger of at least heart disease. But if you think that’s bad, poor old dry-fed dogs are consuming many, many times their RDA of salt each and every meal. Think about it, the average Labrador who requires 1g of salt per day for normal function (NRC 2006). If he is fed 500g of a dry food containing the industry average of 1% salt then they are consuming 5 times their RDA of salt in every single meal [check your dry food of choice here, you will actually have to write into them to find out the true figure but if sodium is quoted (Na) as 04% then you know it’s 1% (the rest is chloride). Not that sodium is the only salt they use, there is also potassium chloride, which will not be listed and they will not tell you]. This figure multiplies to 10 times their RDA for puppies. Unless dogs are spitting salt out of their noses like marine iguanas, this is very bad news for struggling kidneys. No wonder kidney disease in dogs is so rife. Dry food companies recognise this and sell “reduced sodium dry food” for when the problem sets in, which is nice of them. 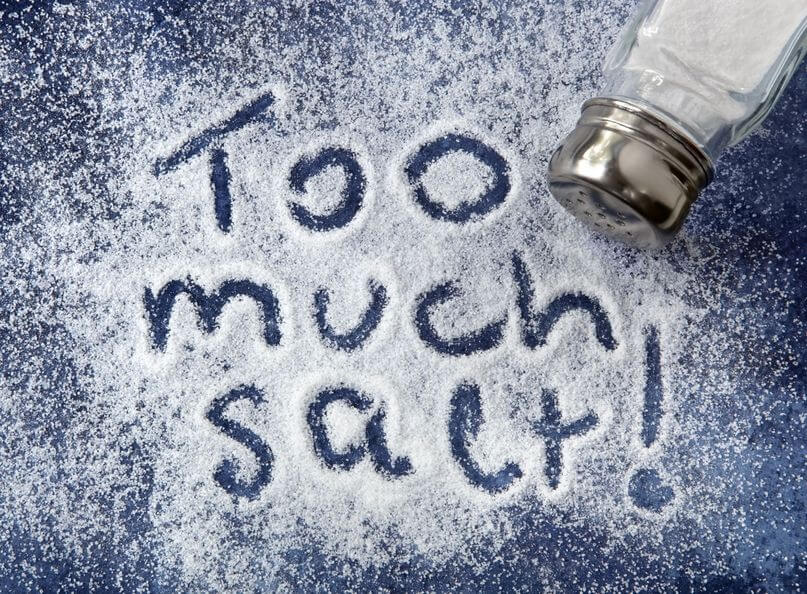 When processed food gave salt all the bad press low-salt diets became all the rage but we now know, looking back, they are no longer recommended either. In fact, a study of more than 3600 heart patients over 8 years revealed low-salt diets were actually increasing the risk of heart attacks!

Know why?! It’s all to do with electrolytes. There are seven major electrolytes in the body: Sodium (Na+), Chloride (Cl-), Potassium (K+), Magnesium (Mg++), Calcium (Ca++), Phosphate (HPO4–), Bicarbonate (HCO3-). These guys play a whole lot of crucial roles in the body and we are under-eating in many of them thanks to our reduction of fresh food consumption as well as the nutrient depletion of our food chain (via poorer soils and intensive-rearing farm practices). Electrolytes are like spark plugs, chemical substances that help the electric nervous systems to function. They make it possible for the cells to generate energy, like a car battery, pumping hearts and brains and muscles. They also control the acid / base balance in your body, something our body is constantly trying to maintain. They also control cell wall structure and the movement of water in and out of the cell, among a number of other processes that I’m not too familiar with.

So yes, good quality salt is actually a pretty crucial part of our diet, and theirs. In fact, if you are feeding a dog raw dog food (good for you) know that this is actually a very low-salt diet. Of course, it’s natural but I often think about the quality of the meat they are getting, and we restrict their access to all sorts of things and places where they might have been topping up their electrolyte load from (from soil consumption when eating off the ground to various freshwater sources).

A pinch of good quality salt in their food now and again is likely a very good idea. I sprinkle salt on his meaty treats that I make. It makes them even tastier and what is occasional is bliss! The Himalayan type is popular and readily available. I’m sure it’s fine. I was told to ensure that you want it completely unrefined and non-oxidised (so, not air dried) for maximum health benefits and mineral content. You can get variations of this Unrefined, Organic Dead Sea Salt on Amazon cheap enough.

Salt therapy might soothe a dog that is constantly itching…

It’s a really simple process where you offer the dog 4 different waters, 3 of which contain some high-quality salt of varying concentrations and the fourth is plain, distilled water. You allow the dog to choose. It’s fascinating watching your dog carefully sniff each one before choosing what he needs. I got so into doing this that we trialled it out on lurchers before and after a race However we didn’t harvest enough data to comment beyond the fact that dogs will take saltier water after exercise, somewhat as you’d expect, but it varied greatly.

Regarding itch specifically, the lady below stumbled across www.watercures.org, followed their instructions and wrote this on Patricia Gethings fabulous FB group Raw & Holistic Cat & Dog Support Group. By all accounts, it’s well worth a go:

Now the website is nothing to rave about but the protocol was simple, cheap and I had everything on hand. I simply mixed 1/2 teaspoon of unprocessed sea salt in a quart of filtered water until it dissolved and offered it to him next to a bowl of regular water.

To my amazement, he sucked down half of it in one sitting and over the next few hours went back to the bowl several times only drinking the regular water after the fourth trip to the water bowl (and btw, because he eats raw he drinks little water).

The following morning he was scratching less and the skin was less angry looking. The next day was his weekly trip to Doggie Day Care for socialisation. Every week when I pick him up at 5 pm, he is dead to the world and resting in an open crate. The staff tells me he lasts until about 3 pm and then goes to rest. This week I sent in a quart mason jar of the sea water mixture and asked them to offer it to him every few hours and to make sure he had access to all the fresh water he wanted. When I picked him up I was shocked! He was out playing and running around. The staff was shocked too. He had consumed about 2 cups of the sea water I had sent in during the day.

The itching is now minimal and the skin is healing nicely. I still have a bowl of the sea water available to him but he hasn’t touched it in days.

Now the protocol suggest you put down four bowls, one with 1/4 tsp, one with 1/2 tsp and one with 3/4 tsp along with a bowl of fresh water and let the dog pick the dose he wants.

An interesting side note, this morning of of my 3 rescued kittens was drinking the sea water instead of the fresh…not sure what that was all about but he seems to be fine with no vomiting.

More from the Itchy Dog series…

Itchy dogs part 1: Why is my dog itching?

Itchy dogs part 3: Is it parasites? Here’s how to check.

Itchy dogs part 6: If you have to buy products, I strongly recommend these…

Itchy dogs part 9: Might this be a yeast infection?