1. Dogs are Descended From A Long Line Of Meat Eaters…

The dog comes from a very long line of carnivores. He is not a wolf but he certainly descended from something like a grey wolf perhaps 30,000 years ago and wolves, all 37 species of them, are all carnivores. While some medicinal plant eating can go on, it’s a very predatory family tree. Some people mistakenly hold up examples of the maned wolf as an omnivorous canid but that’s more of a fox, though it’s not that either. The same with African wild dogs who are very far from domestic dogs. In fact, both these animals diverged from the wolf/dog line more than 5mil years ago, back when we were climbing out of the trees. Looking at African wild dogs is the equivalent of us looking to chimps to see what to feed the kids.
Perhaps most tellingly, the dog’s closest kin are dingoes, the wild, reddish dogs of the Australian outback, domestic dogs themselves not much more than 4,000 years ago. These guys are total meat eaters.
Taken from my book (references available on request):

Fleming et al. 2001 gathered an impressive and unprecedented 13,000 stomach samples of largely dingo hybrids and feral domestic dogs over thirty years, spanning the six different climatic regions of the Australian continent. It is today the largest dietary study of any single canid that I can source. They found animal protein made up 97% of their diet (mammals making up the greater part at 72%, mainly rabbits and kangaroo, with birds, insects, fish, crabs, frogs and reptiles making up another 25%). Like the Grey Wolves above, vegetation made up just 3% of all these samples. This plant contribution in the rainforest-dwelling wild dogs consisted largely of seeds from the stomach contents of small birds whose stomach contents would be too small to be shaken free

For more on the dog’s ancestry and evolution, check out the second part of my four part video series What Do Dogs Eat. Bit old now but will do the job.

Most if not all canine nutritionists agree the dog is, to a very large extent, a meat, organ and bone eater, an animal very poorly equipped to handle and process plant material. He is a scavenging predator. A whole-animal eater. A carcass-finding machine. A long-distance-hunting machine. Just look at those teeth! Ever see an omnivore with teeth like that? They’re not for attacking a wheat field. That huge back tooth you can see below is called a carnaissal tooth, it’s for slicing and chopping meat and bone. And these are set in a jaw that permits no sideways movement. It can only snap open and closed. If you eat plant material you generally tend to have flat, back teeth for grinding tough plant forage and all the sideways movement we human enjoy. Furthermore, dogs have forward facing eyes for hunting, no amylase in their saliva for breaking down plant carbs and taste system adapted to carnivory. And we’re still just on the head! 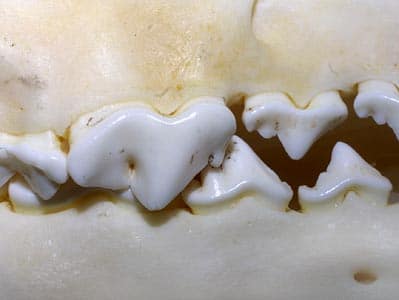 And these are just the outside traits. Inside, they’re all about meat digestion, with a gut like battery acid, a short, smooth and thus rapid digestive system, no caecum (a house for bacteria to digest plant material) and a bacterial flora ill-equipped to break down plant fibre.

However, this is not to say the dog has zero omnivorous tendencies whatsoever. We know a little plant material has been on the menu to some degree at some stage in the past. The physiological give aways are:

True, obligate carnivores (they must eat meat) such as cats do not have such tricks. This is why we call the dog a facultative carnivore, an animal that for the very large part is a meat eater (corroborated by the diet studies) but may take some plant ingredients if needs be.

Of course, some take these minor physiological quirks as evidence that dogs can fed a diet of 60% wheat or corn. This is nonsense. Like saying because I can digest rum and cookies they should be 60% of my diet! (That was taken from Doug Kneuven, a great line!).

For more on their digestive machinery, check out Part IV of my What Do Dogs Eat video series. 8mins.

There is great debate over how much plant material dogs would normally select when left to their own devices. While some canine nutritions like Steve Brown are confident the dog selected a lot of plant items back in the day, most of us are unsure just how much, if at all. Diet studies are my strong point, being the centre of my doctorate. Looking at the small handful of diet studies of dogs it becomes immediately apparent that muddying the waters has been previous authors failing to distinguish between village or free-to-roam domestic dogs and truly feral dogs. Results from free-roaming dog diet studies can indicate they are eating a lot of vegetable matter (up to 40%). Studies of feral dogs, rare as they, indicate a much smaller vegetable component to the diet, less than 10% for the most part. Critical here, is the influence of humans. We know dogs, cats, rats and likely humans can be targeted to certain food items when young, a process that begins in the womb.

Village or free-to-roam dogs are generally raised by humans in poorer countries where roaming laws are lax. With meat bring a rarer commodity in these parts, these dogs are usually fed upon diets containing cheap vegetable material, something verified by the authors of the studies. As such, they may select plant items from a village dump when allowed to free roam during the day. It happens that is the former we usually study as they are so accessible but these works tells us little of what the dog would select normally when left to his own devices.

For more check out Part III of my video series What do Dogs Eat?!

It’s clear raw meat and bone make up a substantial part of their diet. Unfortunately, meat is expensive, which is not ideal when the aim is to make an outrageous profit selling cheap, cereal-based cat and dog food. So over the last few decades dry food companies, via our veterinary universities thanks to extremely generous financial donations, have started re-teaching the public that the dog is an omnivore (a meat and plant eater), that he actually does better when fed a high carbohydrate, low-protein diet that comprises largely of plant material (and no, you can’t see a study that supports that stance, as it doesn’t exist, if you can believe it).

That’s not to say you can’t feed some plant material such as vegetables and fruit to your dog for great benefit, you can when done correctly, and I recommend it, it’s just not a large component of the diet.

Benefits of meat to dogs

Should we feed vegetables to dogs?

Tell me everything about raw dog food in 10mins

How do I make raw dog food?

DOGS NEED THIS INFORMATION! I have always fed my dog(s) on a raw diet but all the other info has been so beneficial for me. Now the Jabbawokki dog can go back to smiling and sleeping! Thanks so much.

E. SkoutaridesTestimonial left on dogsfirst.ie 2020
I just wanted to say a big thank you. You have given me information that my veterinarian should have given me, and which I have repeatedly asked about. After 6 years of battling terrible tummy pain and not getting any real help at the vets we were at crisis point just one week ago. I truly believe you have saved my toy poodles life.

E. CarabineFacebook Review 2017
Tarry, my beautiful rescued GSD, is 11yrs old. He is suffering from cancer & kidney issues. On the advice of Dr. Brady, I changed his diet from complete dry food to raw salmon & veg. He is doing amazingly well. He loves his food, is full of energy again and is thriving!
G. BradyTestimonial emailed in 2016
Previous
Next