Did you know domestic dogs are ten times more likely to get cancer than humans? They are the most cancer stricken animals on the planet. This is a total disgrace when Western dogs are so adored, so pampered. One more little fact, more than 90% of cancer is caused by environmental factors and the worst of these is the wrong food. High carbohydrate, ultra-processed food is the enemy here. Fresh, species appropriate food, higher in fat, moderate protein and zero carbohydrate, will prolong his life. Everything else is window dressing.

I’m Dr Conor Brady, a canine nutritionist with a fair amount  of experience of cancer in dogs. Below I give you lots of natural tips what will help you and your pet live with this disease. If you need specialised help you can book me for a consultation but in the case of dogs with cancer there are better people than me, such as Keto Pet. I would go to them first in this instance.

The piece below is taken from my forthcoming book Feeding Dogs (available Nov 2020). Please share with any vet recommending a high carbohydrate diet for a dog, and ask them for their opinion.

“Studies using dogs provide an ideal solution to filling the gap in animal models of natural disease and translational medicine” (Rowell et al. 2011). Cancers such as bone cancer, lymphoma and bladder cancer are molecularly identical to cancers in people. When viewed under a microscope, it is impossible to distinguish between a tumour from a human and a dog. Moreover their cancer responds to treatments in similar ways. Thus dogs are excellent models for the development of cancer in humans (Moe 2001, Dobson 2012). It stands to reason that the opposite must too apply. For this reason, this section will lean on nutritive lessons learned in human cancer development.

Only 5–10% of all cancer cases in humans can be attributed to genetic defects. The remaining 90–95% have their roots in the environment and lifestyle (Anand et al. 2008). Diet plays a very significant role in the development of cancer in humans, with poor quality fats, too much red meat (particularly processed red meat), too much salt and too much carbohydrates (sugar) listed among the most common protagonists (Stewart and Wild 2014).

Tumours are total carb / sugar junkies. In fairness, all cells need sugar to operate but cancer cells use glucose at 10-20 times the rate of normal cells (Bäck 2011, Connealy 2017). Their high sugar-uptake is actually the main way we look for them, using a method called a PET-CT (Positron Emission Tomography and Computed Tomography) scan. PET scans use radioactively labeled glucose to detect sugar-hungry tumour cells. When patients drink the sugar water, the mix gets preferentially taken up by the cancer cells and they light up. This helps physicians see where it is, to evaluate the extent of the disease, to deduce which treatments to use and to check if those treatments are working. In fact, all the way back in 1931 Otto Warburg won the Nobel Prize for his discovery that cancer cells have a different energy metabolism to healthy cells, notably a greater rate of glycolysis (the process of converting glucose to energy) compared with normal cells.

In this way, a high sugar diet and cancer are the best of friends, but the relationship goes much deeper than that. Macrophage-mediated programmed cell removal (PrCR), or phagocytosis for short, plays an essential role in tumour surveillance and elimination. These are the seek, engulf and destroy cells of the immune system. We’ve known since 1971 that just 100g of sugar via sucrose, honey or orange juice significantly reduces phagocytosis in humans and the effect can last up to five hours (Sanchez et al. 1973, Ringsdorf et al. 1976). If you’re a cancer cell thinking of getting up to mischief, this is most welcome.

It gets worse. As more and more sugar is consumed, cell-resistance to insulin builds, meaning more and more insulin is released into the blood. Insulin is a powerful stimulant of cell growth as it drives fuel into the cell. Cancer cells have 10-20 times the insulin receptors of normal cells (Bäck 2011, Connealy 2017) which enables them to gorge on glucose. In this way, excess sugar leading to obesity and high blood insulin is an important factor in cancer (Calle et al. 2003).

Tavani et al. (2006) studied 2,569 women with breast cancer and 2,588 females without. They found a direct association between breast cancer risk sugar consumption, a result of an increase in insulin and insulin growth factors. Unsurprisingly, the advice for humans with mammary tumours is to reduce the carbohydrate / sugar content of your diet.

It happens that mammary tumours are the most frequently diagnosed neoplasm in intact female dogs (Moe 2001). What’s more, dogs are known to suffer mammary cancer at least 2 to 3 times the rate of humans (Schneider 1970, ACVS 2017). The incidence of breast cancer in human females is currently around 12% worldwide (McGuire et al. 2015). On their website in 2017, the American College of Veterinary Surgeons states the that the risk of a female dog developing a mammary tumour is “0.5% if bitches are spayed before their first heat (approximately 6 months of age), 8% after their first heat, and 26% after their second heat”. That’s 1 in 4 intact female dogs (the ACVS go on to state that while 50% of mammary tumours are benign and 50% are malignant though thankfully few of the malignant mammary tumours are fatal).

The rather complicated graph below highlights that dogs maintained on a relatively low-starch (23%), dry diet exhibited significant rises in blood insulin (Hewson-Hughes et al. 2011), with a near doubling in plasma insulin release (190 versus 360pmol/l plasma insulin) in dogs fed a low (10%) and high (32%) starch diet. Most cereal-based dry foods contain at least 50% starch (from a variety of sources including cereals such as wheat and corn but now pea, potato, rice etc).

As we know mammary gland tumours share common features between dogs and humans, with authors noting dogs make excellent models for the development, prognosis and treatment of breast cancer in humans (Moe 2001, Dobson 2012), does it not follow that a high carbohydrate diet and permanently high blood insulin will plays a significant role in this the most common cancer of dogs?!

I’ll save you the suspense. Studies show reducing carbohydrates in the diet prevents tumour growth in dogs (Ogilvie 1998). The author notes that dogs with cancer are proven to do significantly better on diets containing less carbohydrates.”

My dog has Cancer, What do I do?

If your dog has cancer, and you’ve been to the vet, you must consider the following: 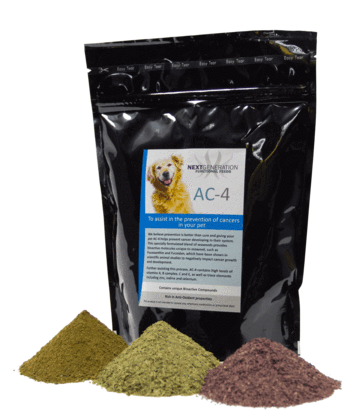 All these things can be done IN CONJUNCTION with conventional veterinary treatment. If your vet is recommending a dry, carb-based dog food for your dog with cancer they are categorically wrong and I urge you to seek the advice of a vet that has studied at least nutrition. It will keep growing if you keep feeding it.

[All references above available on request].

Alabama Rot in Dogs – Can Everyone Please Calm Down