Did you Find it Worrying That the Nutritional Manual for our Vets is Published by Colgate-Palmolive?

Around 2010 I flew to Brisbane, Australia to see first hand the effects of switching a large group of dogs from dry to raw. The differences in the dogs were so obviously incredible on so many fronts (training to health to kennels to form) that it was like the clouds parting and bright sunshine pouring through. It was as close to a religious moment as I was ever going to have. I knew everything was going to change from that point.

When I got back to Perth Guide Dogs I told my supervisor that we had to make a complete change, not just little bits here and there, not just the sick dogs. Sadly my supervisor and his vet did not agree. They said absolutely nothing was going to change from this point forward.

We parted ways soon after and I spent the next year or two in full-steam research mode. Eight to ten hours a day, buying books and access to journals (this can get pricey), running little tests on the pet dogs I was training, making friends with like minded people, visiting the local veterinary library (Murdoch University, the largest veterinary college in the Southern Hemisphere).

It was while in this library that I thought sure while I’m here I might as well ask the resident experts. So I went looking for one. I was passed from one vet to another until I eventually arrived at the vet that might be able to help this eager young lad with his questions.

While in fairness the guy humoured me it quickly became apparent that we were on different pages. About ten minutes in we were debating the inadequacies of complete food. He asked me had I read this, holding aloft a 5 inch thick manual (I’m not exaggerating), called the Small Animal Clinical Nutrition?

For those of you who don’t know it, the SACN is THE veterinary bible for nutrition in dogs and cats. It’s the mainstay of cat and dog nutrition in veterinary universities and practices the world over, formidable collection of all things nutritional, containing literally thousands of nutritional articles and studies, and it’s provided free or at vastly reduced prices to vet students the world over.

The Mark Morris Institute, publishers of the SACN, note on their website:

…recently reviewed in the Journal of the American Veterinary Association (AVMA), the text was termed “the nutrition book that every small animal practitioner, veterinary student, and nutrition instructor must have in his or her library…

I told the vet that yes I’d gone through it. That in order to get their viewpoint I knew I had to start with the science they use to support their arguments.

He picked up on my use of they. He said what do you mean “they”? I answered, well the SACN is published by the Morris Institute…..as in, Colgate-Palmolive……..

The Mark Morris Institute was orginially founded to honour Dr. Mark Morris, Sr., a pioneer in the field of clinical nutrition. Dr. Morris is a legend.

He helped shape the vet profession and establish high standards for veterinary hospitals, equipment, and personnel. He was one of the founders of the American Animal Hospital Association (AAHA) and served as its first president in 1933. Dr. Morris also served as president of the American Veterinary Medical Association (AVMA) in 1962. He was listed in Who’s Who in America and American Men of Science

Dr. Morris is perhaps best known for his work in the development of dry pet foods that were focused on the management of particular diseases in dogs and cats. His first contribution was a restricted protein diet for canine kidney patients called Prescription Diet® k/d®, first marketed in 1948. Success here lead to the development of dry foods for liver and heart diseases, pancreatitis, and obesity. His son, Dr. Mark Morris, Jr., later added the Science Diet® brand.

In 1988, Mark Morris Associates was sold to the Colgate Palmolive Company, which owned Hill’s Pet Nutrition, the makers of all the vet prescribed diets. 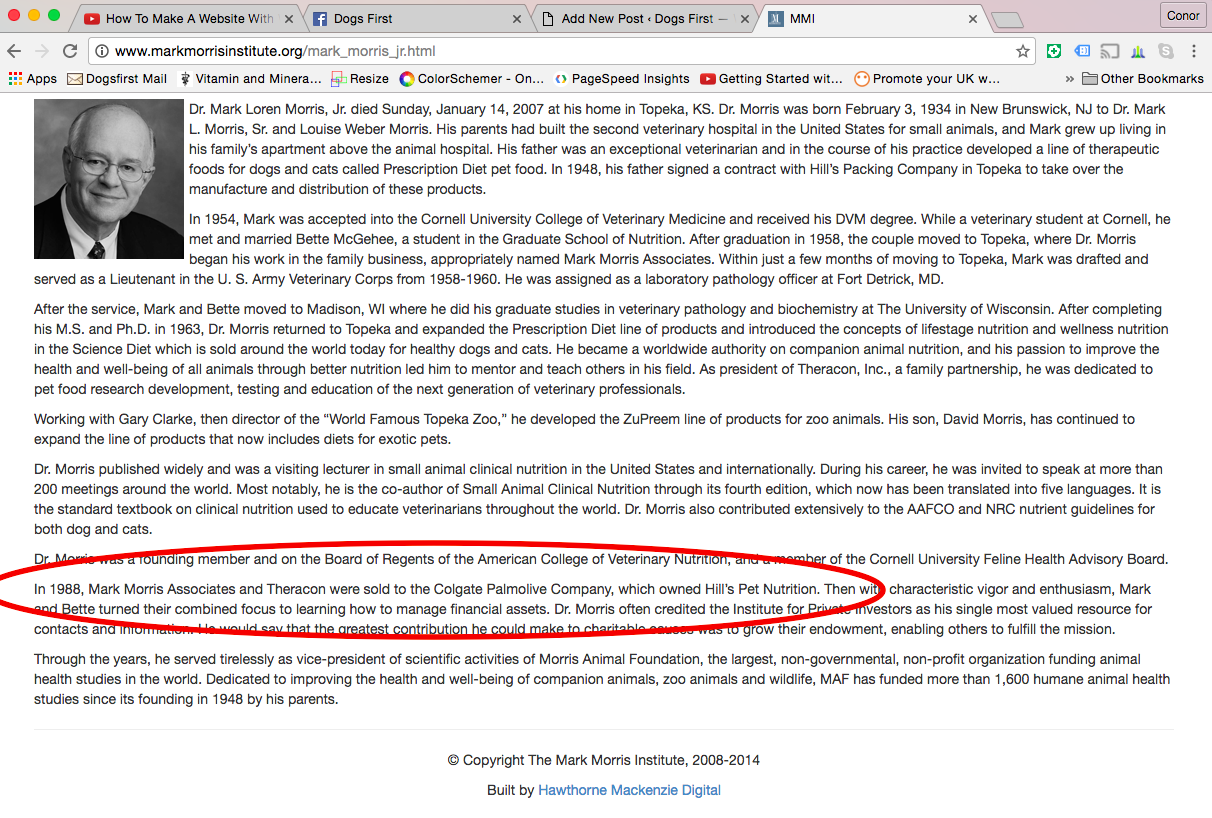 In the same way they pay dentists to say X toothpaste is awesome, it’s all about trust. It sounds far more convincing when an old research institute with history says dry food is awesome than “researchers at Colgate-Palmolive” saying it. Mars do it with “The Waltham Institute“.

I tried to explain this to the vet. If I wanted to learn about the benefits of fresh feeding I’m probably not going to get it from a book published by the world leaders in dry pet food, a scientific manual that fails to reference a single study where dry fed dogs were compared to a control group of fresh fed dogs, let alone conduct such a study itself.

You’d swear I just told him what I was planning to have for lunch. He didn’t bat an eyelid. Our meeting ended soon after with my retreat. It’s like you’ve fired your biggest gun at superman and it just bounced off.

This was the first inkling I had that debating canine nutrition with a vet would be as productive as debating evolution with a person who takes their science lessons from a story book written two thousand years ago.