Zoopharmacognosy Continued: The first two tastes were fine…which turns out is a bit of a worry…!

Just a follow on from the Zoopharmacognosy Facebook post yesterday entitled “Give Raw Garlic But Separately to the Food” re garlic selecting in dogs. If you missed it, check it out. We were saying that garlic might be better put to the side of the bowl as dogs will select it “if they need it”.

If you are like me your next question would be “how do they know?”. First off is the massive nose. 25% of their brain. We have literally no idea what it would be like to have a nose twice as good, let alone ten times and certainly not thousands of times better. Bit more on the scenting bit next week as I’ve gone down a rabbit hole there. For now, I wanted to talk about the second method, essentially a feedback mechanism, which has some interesting science behind it.

While I may well butcher the true value and intricacies of zoopharmacognosy below (simply a reflection of my current lack of understanding of the processes involved) think about “needing” that glass of water. Or pregnant women “needing that bit of charcoal”. In fact, in the latter, there are often very good reasons for these strange cravings (termed pica). For coal, it may be the iron-rich minerals. For red meat, it’s likely the need for blood cell growth (in particular vit B6). Broccoli, peaches and pears are likely for folate. An urge so great it’s hard to resist, but there for a reason.

Zoopharmacognosy stems from the Latin meaning animal-medicine-knowing. It’s clear with the garlic experiment yesterday and the fact dogs clearly self-select certain plants at certain health-times, the same way elephants and chimps and vultures and birds regularly go out of the way to get certain plants in times of need (birds, in fact, build their nests and include some plants known to have certain health effects on their chicks, you can take these bits out and the chicks suffer more disease). Even caterpillars will seek out certain plants depending on what they have been infected with (eg they seek out leaves higher in antioxidants when sick but plants higher in what would normally be poison to rid of a parasitic wasp infection). I have written about Zoopharmacognosy in animals before, check it out.

But this process is alive and well in humans too, it’s just these days it’s a little more confusing for us. There are a number of potential reasons for this (in my opinion, I really need to ask Caroline about this, but enjoy going out on a limb occasionally…) – perhaps it is our reduced nose power, or our craving of sugar and fat (very addictive, your brain screams out for these, especially when they are consumed together). Perhaps it is the reduction in brain space given over to such things, it being replaced with more crucial actions such as dancing in high heels whilst holding a pint without a spilling drop. One of the most important factors might be that thanks to farming where over time our food chain has improved (at least until the last couple of decades when ultra-processed food is now actually killing us quicker, as we see with life expectancy now falling for the last two years in the US) so our access to easy nutrients has increased greatly. We may now be less exposed to the insatiable need but it explains why these needs appear during the high-tax of pregnancy. One thing is for sure though, the mechanisms that govern this almost automatic desire are still at play in humans, and Caroline proved it to us all with a wonderfully simple, if slightly worrying, experiment. 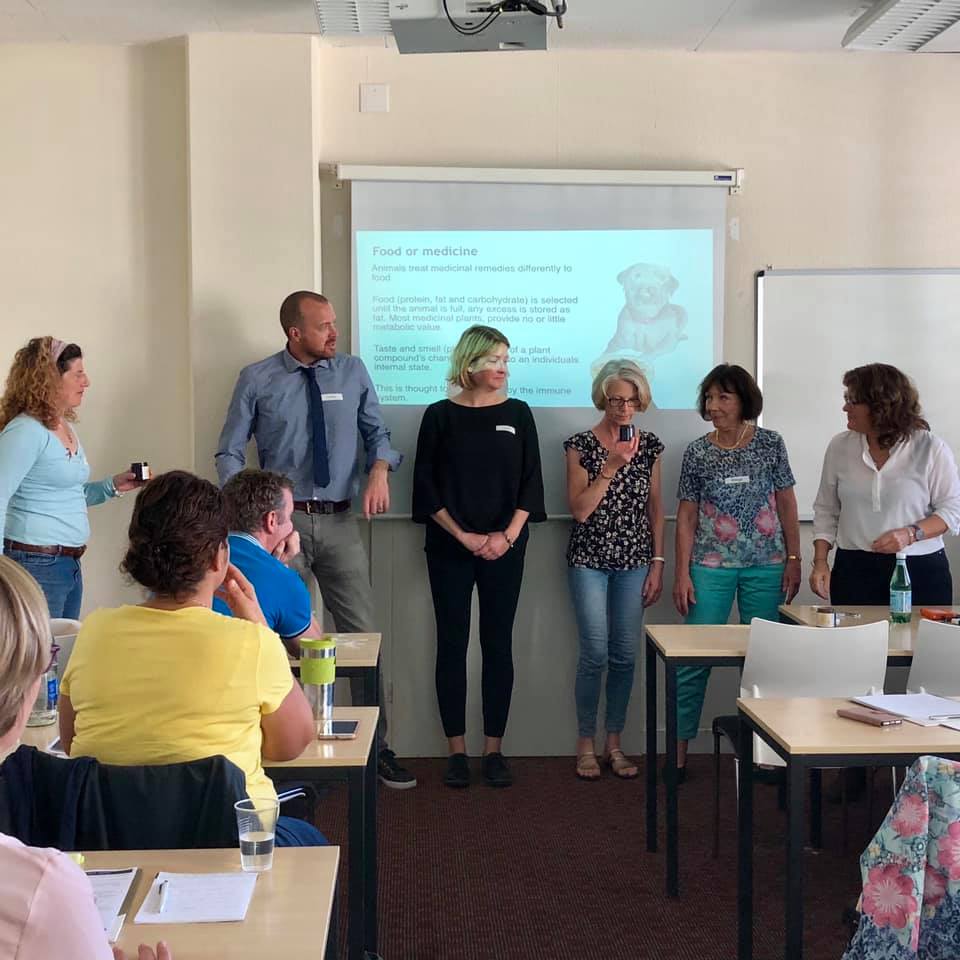 Caroline called five people up the front of the class. I was happily among them. I like experiments (I was going to write IFLS, a website I urge you to check it out if cool science is your bag but it has a curse word in it, it stands for I *really* Love Science).

She presented us all with a tub of powdered liquorice root. She asked us to lightly dip our finger into it, taste it and tell everyone what we thought of it. Four of us said it was quite pleasant, actually quite sweet. One person said it was bitter and she asked to sit down. On the second dab we lost another participant. Mine tasted bitter on the third dab and I sat down.

Caroline explained to us that this is the feedback mechanism involved in self-selection by animals. I mean, it has to have a biological mechanism, animals do not / cannot comprehend disease as we can. If it tasted sweet your body has space for it, has a need for it. Once you satiate this need it switches to a bitter taste to stop you eating it. This is why dogs will keep consuming a certain herb or tincture etc but will eventually be repelled by it, turning away. It’s saying that’s enough of that, I’ve got what I need, for now. Sick animals might return regularly to the tincture, even if 5 or 6 are open in front of them, self-selecting, often on a daily basis until the maladie they are suffering has been overcome.

How bloody interesting is that?!!!!!!

What’s liquorice powder for? Adrenal fatigue, apparently. Quite common it seems but I still spent an uneasy night learning everything about it. A common telltale sign, when it’s advanced, is those shadowy dark bits around some peoples eyes. Other symptoms, at least in my case, is that of late I have been lower in energy, something I had attributed to being over-worked, which is likely at play too. Also, as most of you know, I have an insatiable desire of sugary foods. I’m like a bee. Another symptom was unexplained hair loss! All of which isn’t fair as I have eaten more than my share of liquorice all sorts. Now I’m thinking, has my body been saying “liquorice” all the time?! When it sees the liquorice all-sorts in the garage it screams “THEM THEM THEM RIGHT NOW OR I WILL MAKE YOU WET YOURSELF IN FRONT OF EVERYONE”, so I find myself paying for a big bag when I only came in to pay for petrol. What else am I eating in a disgusting ultra-processed form that I should be including in my diet? What else do you need body (please god say strawberry sherbets)?!!

I’m definitely left a little rocked by this. First off, a whole new realm of unexplored science (at least by me) has just appeared in front of me and I’m afraid I will disappear into a rabbit hole for months (I can actually see my feet hanging out the end of it). But moreover, I feel I have to go down to my local health shop and buy every natural substance available on the planet and eat them all one at a time. Both of these fears, I hope, going to be partly aided by picking up Caroline’s book and using what she has learned over the last 30 years…

Want to know more about Zoopharmacognosy and how you can apply it easily to a great variety of issues that plague dogs today?!

Then you won’t do better than picking up Caroline Ingraham’s mind-blowing book Help Your Dog Heal Itself. She is the founder of the discipline after all. Find it on Amazon below (I get a small percentage of the sale should you make the purchase). 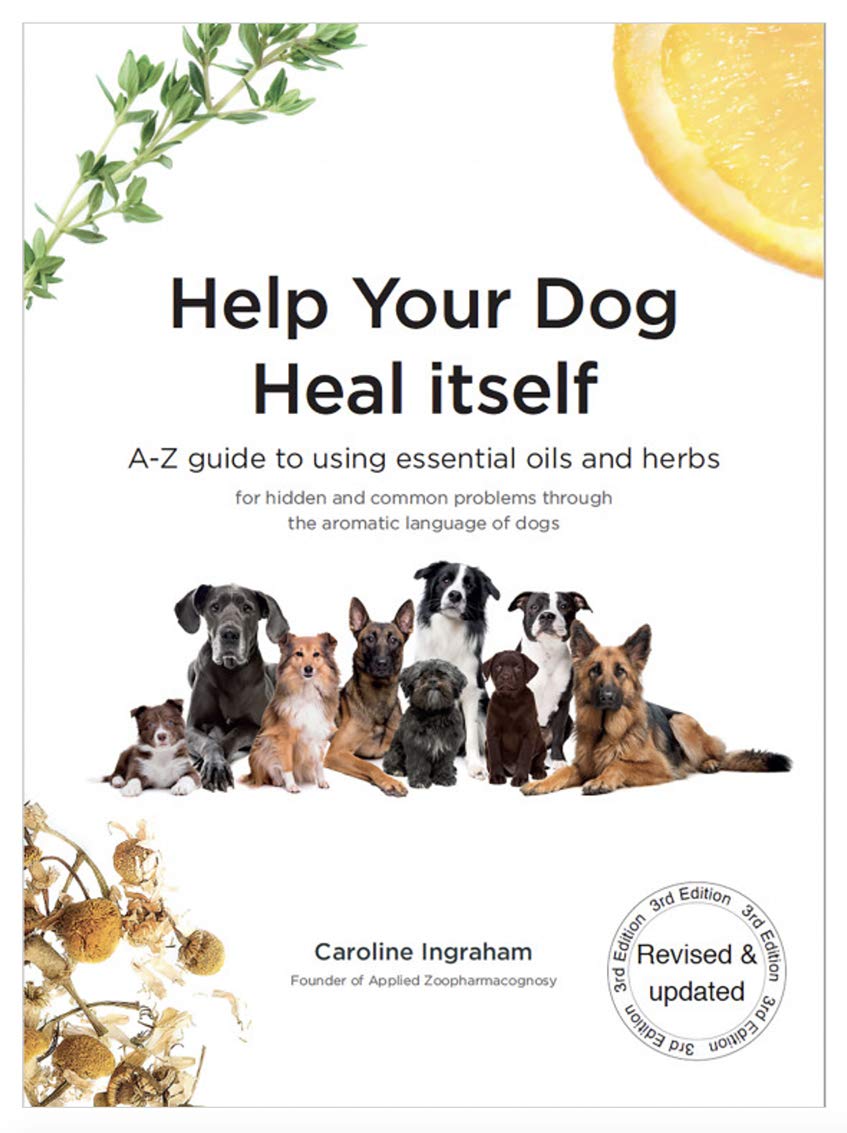 Ever Heard of a Pure Gatherer?!

Important Notes on Thiamine (Vit B1) for Dry and Raw Feeders…