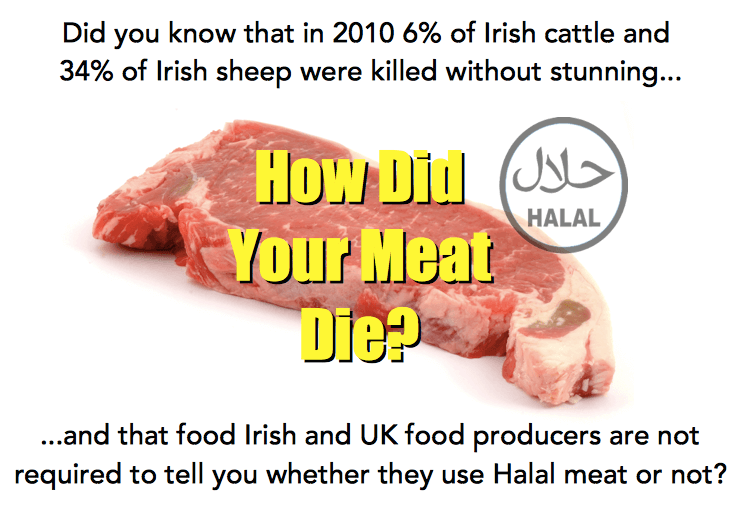 Do you Care how the Meat in Your dog Food Died?

I had a disturbing conversation with a big meat man that I wanted to share with you. The guy has been in the meat industry for 40 years. A major Irish producer, some of the stories he can tell you would make your toes curl. One of these stories slipped out over a cup of coffee last week. It’s in relation to Halal meat bring produced in Ireland (and the UK) and the fact that you and your dog are highly likely to be regularly eating it.

We are so sheltered from this world it’s ridiculous. We are unlikely to see how an intensively reared farm animal spends its days and the vast majority of us will never see an animal being killed. We all hope it’s good and quick. I think it’s fair to say nobody wants them to suffer.

It thus came as a bit of a shock when my friend told me a little known fact, that Irish and UK consumers are eating Halal meat all the time, you just don’t know it as the producers are not required to tell you on the label.

What is Halal / Kosher Meat?

First off, let’s not all roll in with the whole “anti-religious” debate. What invisible man you believe in makes as about as much difference to me as it does the cow standing on the slaughtering line. What does matter to me and most certainly the cow, is animal welfare, and this is what this article is about. So let’s leave all that crap at the door.

Halal is an Arabic word meaning lawful or permitted. In very short Halal meat (for Muslims) and Kosher meat (for jews) requires that the animal is fully conscious while it’s throat is cut, crucially using no anaesthesia and prayers are said over the animal as it dies. Muslims also point the animal West.

Please note: I am not going to insert a video of halal slaughter, but in my opinion, I feel that if you are prepared to tolerate it you should be prepared to watch it.

Halacertification.ie states that the method of slaughter is as follows

While Jewish people accept absolutely no stunning, some Muslims have accepted it as long as it can be shown that the animal could be returned to normal living consciousness, which they can do. Hence companies like Subway and KFC can use Halal meats and tell you that the animals are stunned first (if you ask them).

Clearly, the fact that the animal is wide awake during slaughter goes against our established welfare laws. At the upper levels the EU’s laws on slaughtering are clear, animals must not suffer and must be stunned (rendered unconscious) first using electricity or a captive bolt gun (or in some cases CO2 gas). The restrained animal takes minutes to die, often suffocating on

The restrained animal takes minutes to die, often suffocating on it’s own blood while people stand around and watch. While conditions undoubtedly vary, some of the accepted methods of restraint are barbaric, there is no other word for it. In North America some kosher slaughter plants use very stressful methods of restraint such as shackling and hoisting fully conscious cattle by a single rear leg. In Spain the cow is hoisted up into the air and turn it upside down before cutting it’s throat. The problem with this method is that the animal is certain to suffocate in it’s own blood, instead of the upright pens which confine the animal and simply allow it to bleed out.

What Does Temple Gradin Say re Suffering of Animals Ritually Slaughtered?

The absolute boss for animal welfare during slaughter is Temple Grandin. You can learn a bit about Temple Grandin here in Wikipedia, she’s a fascinating person and the world leader in advocating animal rights, primarily at time of slaughter. Her book “Animals in Translation” is an absolute must-read for all animal lovers, particularly those with a penchant for behaviour. Nobody knows more about the subject than her.

In her excellent 1994 article “Religious slaughter and animal welfare: a discussion for meat scientists” Grandin highlights that even before slaughter we must ensure the animals are not stressed by the method of restraint. This is most important. She highlights that this is not always considered. That aside, sometimes, it seems that the animal’s reaction is not as horrifying as you at first may have imagined. Here are some key paragraphs;

Here are some key paragraphs. The first is from a state of the art facility with excellent restraining systems, practices and blades;

In all three restraint systems, the animals had little or no reaction to the throat cut. There was a slight flinch when the blade first touched the throat. This flinch was much less vigorous than an animal’s reaction to an eartag punch. There was no further reaction as the cut proceeded. Both carotids were severed in all animals. Some animals in the modified ASPCA pen were held so loosely by the head holder and rear pusher gate that they could have easily pulled away from the knife.

These animals made no attempt to pull away. In all three slaughter plants, there was almost no visible reaction of the animal’s body or legs during the throat cut.

…one which allowed the incision to close back over the knife during the cut, resulted in vigorous reactions from the cattle during the cut. The animals kicked violently, twisted sideways, and shook the restraining device

Grandin concludes that there needs to be continual monitoring and improvements in technique to achieve rapid onset of insensibility. A high incidence of prolonged sensibility is caused by poor cutting technique, rough handling, excessive pressure applied by the restraint device, or agitated excited animals.

So not what it seemed at first, though little better. And to be fair, you could say this about any slaughter house. Just because they use a bolt gun doesn’t mean that the preceeding ten minutes of that animal’s life wasn’t absolute terror, in establishments where controls are lax.

At any rate, the practice does not sit well with many (author included). One of the arguments that arises at this point is that if you outlaw their barbaric rituals you are attacking their religious freedoms, and that’s mean.

But this simply isn’t a good enough reason. If you Google Halal meat you will be met with a deluge of anti-Halal videos. Google the same. And there are countless Facebook communities such as Boycott Halal with 90k+ followers. In 2014 Denmark banned kosher and halal slaughter, with the minister stating ‘animal rights come before religion’.

In other non-muslim, non-jewish countries, such as Ireland, US and UK, halal and kosher killing is freely permitted. With Muslim and Jewish communities accounting for 25% of the world population (which is perceivably 1 in 4 chickens and cows getting ritually slaughtered “as that’s how they did it thousands of years ago”), it’s a strong lobby.

A 2012 EU publication goes some way to explaining how difficult a time they have in proving that animals which are stunned do not actually feel pain. As absolutely ridiculous as it sounds, they state:

There is no definitive scientific evidence that an animal does not feel pain whilst unconscious. Indeed, a counter argument put forward is that stunning may only stop an animal displaying pain.

Recently, Irish law too has invoked the “religious exemption” for live ritual killing, stating (itallics added by me):

15 (2,a) the slaughter of any animal for consumption as food by Jews, where such slaughter is carried out according to the Jewish method by a Jew who is for the time being approved in that behalf by the Chief Rabbi of the Irish Free State for the time being or in his absence by the Board of Shechita of the Jewish Community of Dublin

(b) the slaughter of any animal for consumption as food by Mahommedans, where such slaughter is carried out according to the Mahommedan method by a Mahommedan

But of course, it’s not as simple as that, otherwise we would permit Female Genital Mutilation, cannibalism, stoning and a whole host of other charming and arguably religious practices, but we don’t. They’re not allowed. Animal sacrifice though, that’s ok. And you know why. Money.

Why did Ireland bend it’s Welfare Laws to Permit the Ritual Killing of Conscious Animals?

Thus ritual killing is now permitted in Ireland. The results of a 2010 European Commission request for data on ritual killing in member states found that in Ireland, where 1% of consumers are Muslim, 6% of our cattle and 34% of sheep were killed without stunning. Pretty shocking for a nation of non-Muslims eh? The UK now produce more Halal meat than the rest of Europe, and it’s only 4% Muslim

So, why do we produce so much Halal meat here in Ireland? It is of course for money. Here’s why, explained by my friend to my dictaphone and transcribed by me with curse words taken out!

The glorious thing about the Halal meat sector is that Muslims do not eat the back end of the cow as it’s considered unhygenic or impure due to it’s closeness to the bum. They eat the front end of the animal, the neck, chuck, shoulder, the pieces that non-muslim Europeans would consider poorer quality. That’s the stuff I normally struggle to sell. The back end of the cow gives us fillets, sirloin, striploin, the pieces you roast on Sundays. That’s where historically the money comes from. Now if I get a guy in to cut their necks without sedation and say a few words I get top money for both ends of my cow. One to the Muslim sector, and one to you guys.

I was a bit taken aback by this, and the question that naturally followed was, how will I know that the dog food product I am buying for my dog is not made on Halal meat? He said you won’t. They don’t have to label the meat for non-muslims as Halal.

If that make us label it Halal people probably wouldn’t buy it.

This is really getting to me as I absolutley do not support this method of slaughtering an animal. Clearly the Grandin study shows that in some cases the animal does not appear to suffer the fact remains that in many cases they do. To remove this, it is my belief that our system of stunning the animal first is better. But it appears my beliefs are not a consideration.

A little digging reveals that this problem is rife. In fact, more than 70% of New Zealand Lamb in Tescos and Sainsburys is Halal. It is only labelled as such at the Halal and Kosher meat counters. This article also mentions that all Lidl Halal or Kosher products are labelled as such. The UK Halal meat sector is worth £2.6bil a year and when sold to non-Muslims it is not required to be labelled as such. It’s the same in the U.S.

So I Contacted the Department of Agriculture…

So I wanted some answers. I rang the department of Agriculture. Needless to say,  Thanks for your time on the phone. As I mentioned, I am looking for some info on our Halal meat sector. Specifically, I asked

When I hear back I’ll let you know.

Patron Project has Arrived and it’s Going to Change Everything.