This is an Article About Cheap Solutions For Raw Dog Food, not necessarily the Best.

OK, we’re just talking about price in this article. If cost is a primary motivator for you right now, don’t be put out, you are still trying to make the best decisions you can for your pet, putting you in the top 10% of pet owners today. Carnivores are expensive to feed, that’s why there is so little of them in the wild. We can only do our best. This article has a number of tips for how you can save some pennies.

First, Know You are Paying for Ground Carcass…

The first thing is, despite what companies try to infer on their labels and write-ups, you guys are going to have to accept that when it comes to cheap raw dog food, folk are generally grinding up carcass (for chicken, duck, turkey, wild game, “lamb”) and selling it back to you in packets. That’s the truth of it. In fact, it I was to guess, I would say more raw manufacturers are doing this than now. Meat muscle is expensive and as neither you or your dog can tell, cheap carcass and necks make up the majority of cheap raw dog food. It’s at least what you should assume until more is known.

Unfortunately, current labelling laws mean a company that a company is not rewarded for using better bits in their mixes. One might say “chicken” and be using chicken legs (great) the other might say “chicken” and be using carcass (just skin and bone, still OK in small amounts but your dog needs meat muscle more than anything and the definition of a carcass is the muscle is largely removed). So, unlike if they say “tripe” where you can’t go wrong, company’s are not motivated to use better bits and they would be punished price-wise over time if they did.

This really annoys me as cheap carcass is essentially being sold back to cash-strapped pet owners at around ten times the price you would pay for actual carcass in the butchers.

It is, for this reason, I urge caution when buying all raw dog food, don’t be placing too high a value on pre-ground stuff, especially if that mince is ground fine (chunky is a lot more trustworthy, they’re not afraid to show you what it contains). It is also for this reason that I say not to spend too much money on products that label themselves as plain “chicken” or “duck” mince for pets. I would assume I’m buying carcass.

If Buying Cheap “complete” Raw Dog foods, Ensure They have “Meat” Ingredients added or Know you need to Meatify Them Yourself…

I would be less keen on cheap raw dog food that lists as its ingredients “Chicken, beef liver, kidney, veg & seaweed”. That means to me chicken carcass (skin, fat and bone), 10% beef organ (great) and some window dressing. There is no meat muscle in that for my dog, and they need a good whack of that to not only build their own muscles but skeletons, skin, hair, cells, hormones, everything. They need all those amino acid building blocks in the muscle.

Some companies include some meatier bits (e.g. tripe or heart) to meaty-up their mixes a bit (common in companies making pre-made “complete” raw) which makes it much better for your pet (than meat-free carcass).

For example, Paleo Ridge’s most affordable range of completes read as “tripe &…”. Their stuff is ethical and organic so it’s more expensive. You can find a product like this from the more intensively-reared sector, where the vast majority of companies are pulling their ingredients from. It will be significantly cheaper. 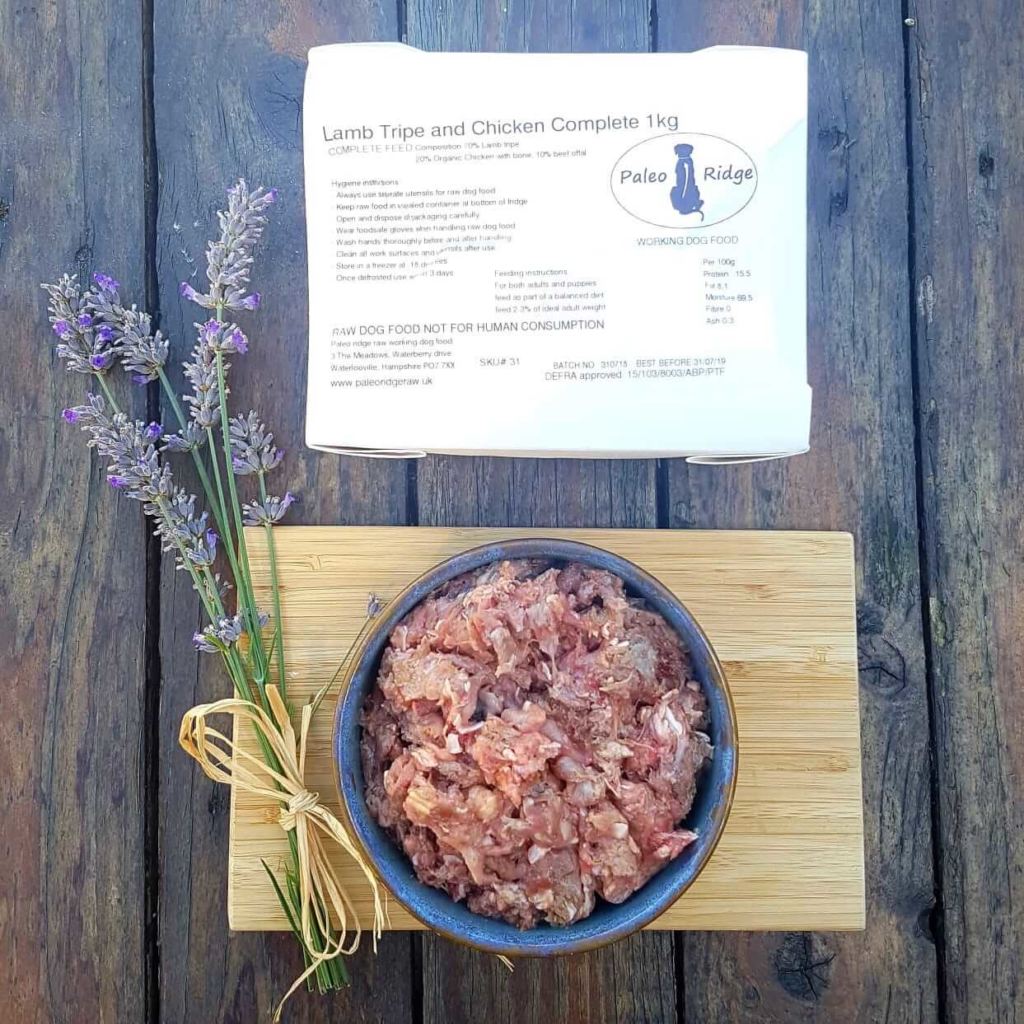 To sum up, plain, cheap “meat” minces for pets are usually ground, meat-free carcass. They will always be ground fine to mush so you can’t tell. If buying cheap, at least by the ones they have meatified with heart or tripe OR buy these cheap minces as an acceptable, cheap filler and bulk it up with meat muscle where you can find it.

With pre-mades you are paying someone to do it all for you. You could easily save another 50% on your raw dog food bill by making it yourself. It’s so easy to do. First, you need to learn how to make raw dog food yourself. Once you’re comfortable enough with the process (and it IS simple), you can then start thinking of ways to save a few pennies in the process. My article “cost of raw dog food” gives you all the tips on how to source cheaper stuff and get that price down to €1.50 per kilo (£1.30) for the fillet steak of pet food. And there is still room to drop further, if you’re willing to work at it!!

Where does the meat come from in your raw dog food?

Where are you on the dog food scale?!