I did a seminar for a small group in Dublin recently. There was a great mix of people there, a few Stafford breeders, some Rottie owners and some working dog owners. The latter group were speaking very highly of Dr. Arleigh Jones. This wasn’t the first time I’d heard his name and, unbeknownst to me, I have been referencing some of his stuff these last few years without realising. For example, you will often hear me use the study of sled dogs fed low, medium and high-protein diets when demonstrating how dogs need more protein in their diet (all the dogs on the low protein diets suffered at least one injury in the season while every single one of those in the high protein group was injury free). Little did I know Dr. Arleigh Reynolds put this study together (Reynolds et al. 1996).

Reynolds knows more about feeding athletic dogs than pretty much anyone. He has won the World Championships Dog Sled Race, which is one of the toughest endurance races out there, for dog and man.

He and his family and dogs are based in Alaska where dogs are revered more than sports stars. In the extreme conditions of the Alaskan wilderness, he explains how the dogs’ incredible physiology helps them overcome cold temperatures and hostile environments. With sledding, his dogs can run 20mph over 20 to 30 miles. Phenomenal.

What’s really interesting about this vet is that he does lots of research, putting everything to the test. Most importantly for us here is that he tests the effects of “normal” food items, with outstanding results. And his data is relevant to all working dogs, as well as our pets.

Here are some of the standout comments, recommend you give it a watch.

– giving your dog colostrum (the stuff in mothers milk) boosts immunity in dogs during training. He compared two groups of dogs, those with and those without colostrum supplementation. During the summer months both groups did fine but nearing the end of the season as training increased and temperatures dropped, the dogs without colostrum suffered a big drop in immune function (bovine colostrum is now used successfully in the treatment of leaky gut issues in dogs).

– Alaskan blueberries contain more antioxidants than any other berries on the planet. When his dogs were fed these blueberries they were more protected from free radicle damage, thanks to 4 or 5 compounds that work synergistically to get the job done

– Omega 3 fatty acids from wild salmon fed to puppies were better at problem-solving and better at finding their way out of a maze. This is being used in infant formulas now where studies show, ten years down the road, can read one line lower on an eye chart and were averaging IQ scores ten points higher.

On the negative side, we can see in this video that Dr. Arleigh Jones is sponsored by Purina. For me, this was initially extremely disappointing. If Reynolds was running his dogs on low protein dry food his would be the first and only race team to be doing so. Sled dogs are surely fed fatty meat diets?! A quick check of the literature reveals this to be the case

However, to be fair, when I went sledding I saw that the dogs received some dry food in their rations. More recent research points towards an increase in the amount of dry food now used by these teams. Analysis of the diets of three racing teams (these dogs are running for 13 days straight – can you believe that?) reveals that dry food can make up a small portion of their diet. While meat still makes up the large majority of these high-performance diets, clearly dry food companies can still rightfully say that their products are involved in the process. Perhaps this is an ease thing too, you’re not going to go boiling porridge at night time if you can whip out a bag of nuts that will do the same thing. It surely cannot be a nutritional thing…

That aside, the fact is, conducting studies and indeed participation in the gruelling World Championships Dog Sled Race, are cash expensive things to be doing and dry food companies have cash.

Thus it becomes a balancing act. While Reynolds is clearly a believer in fresh meat feeding and supplementing a dog’s diet with powerful natural additions, something he has shown they benefit enormously from, he is at the same time converting millions to low protein dry food.

It’s thus hard to judge this one. We desperately need the scientific information that he is putting out as it all supports the benefits of feeding fresh food to dods, but few of us want to see how he pays the bills to pay for his work. 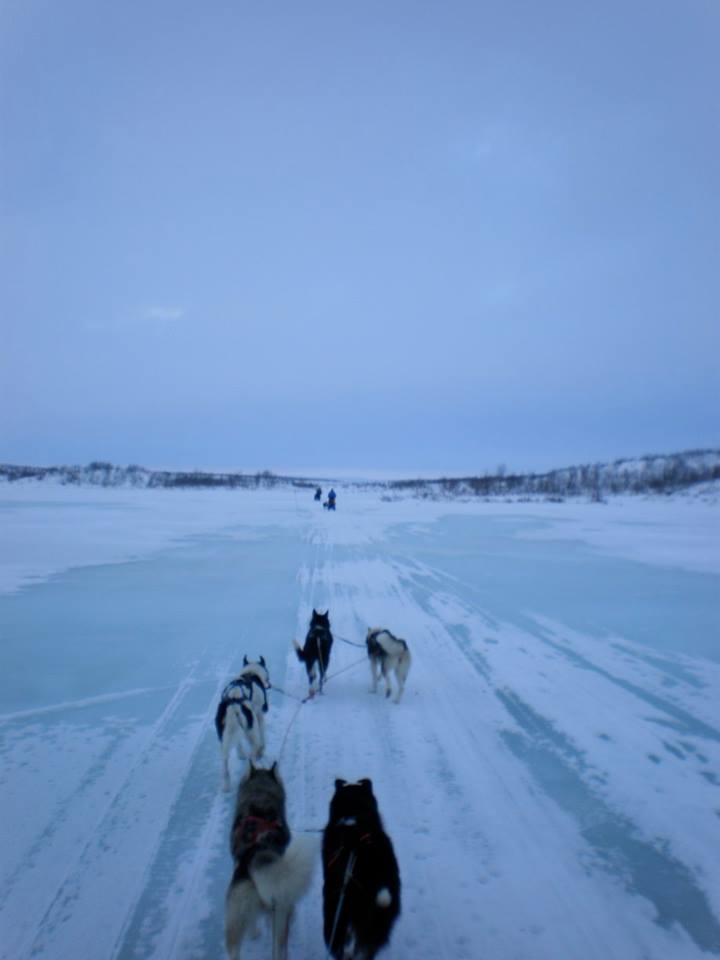 Sledding up a frozen river. 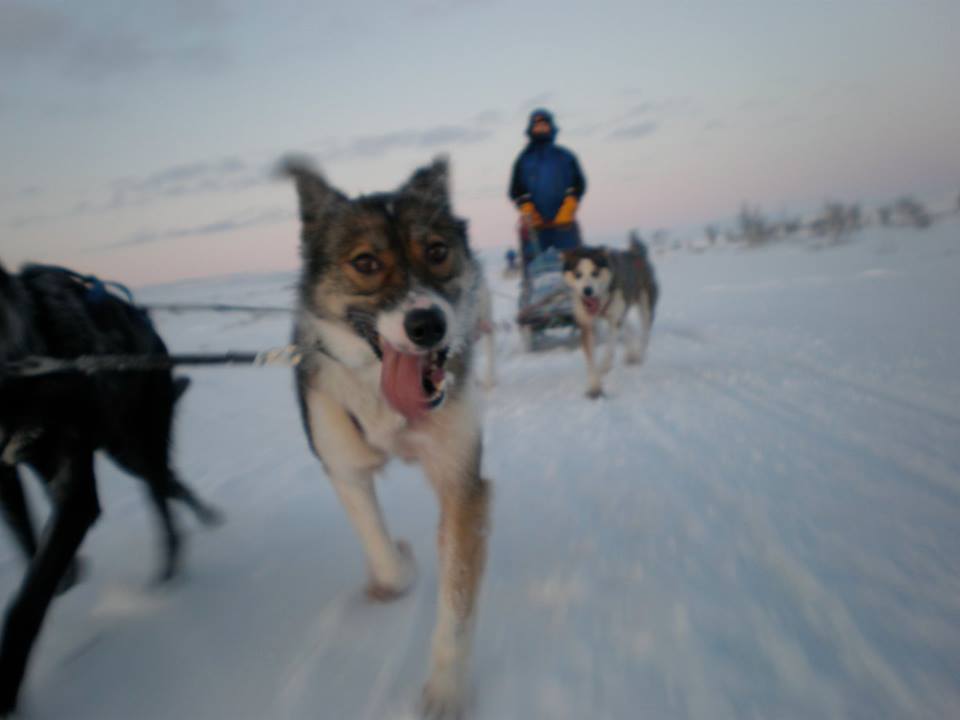 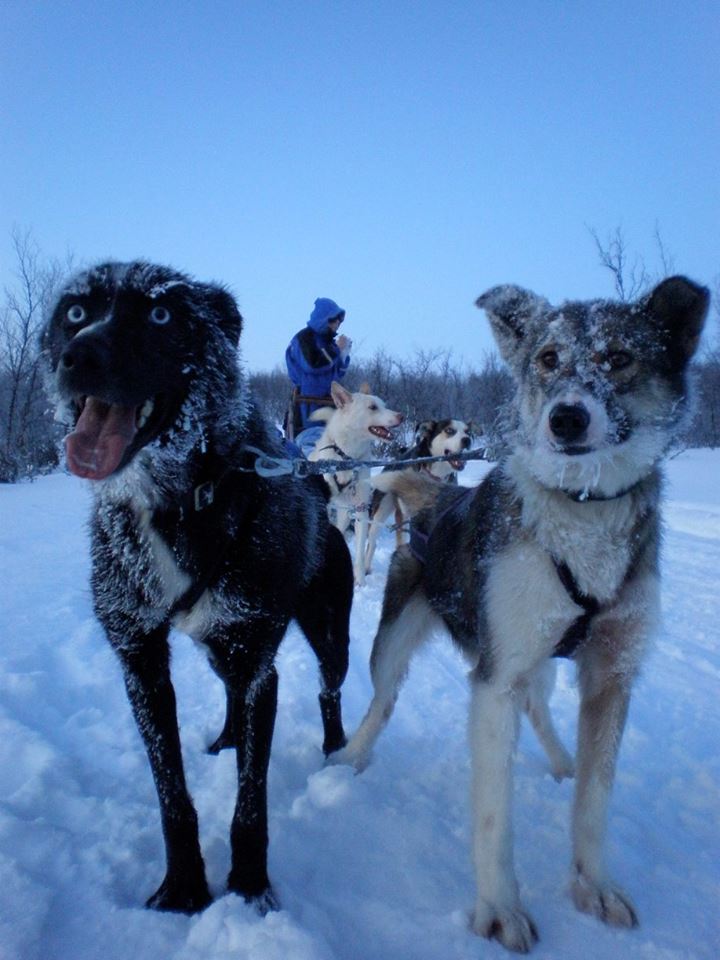 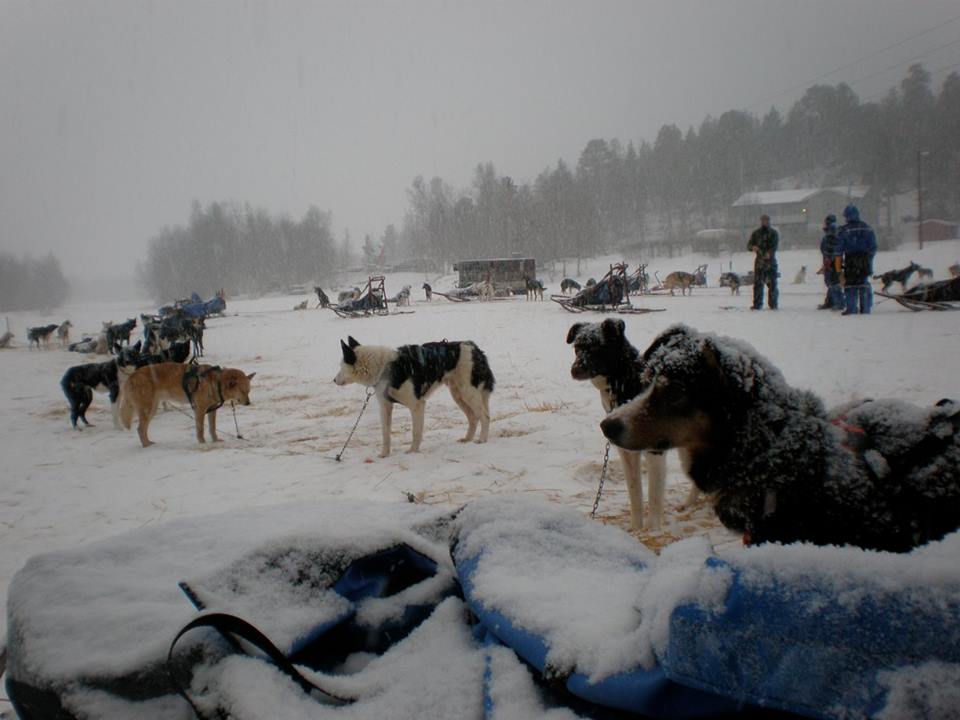 Just about to set off day 4… 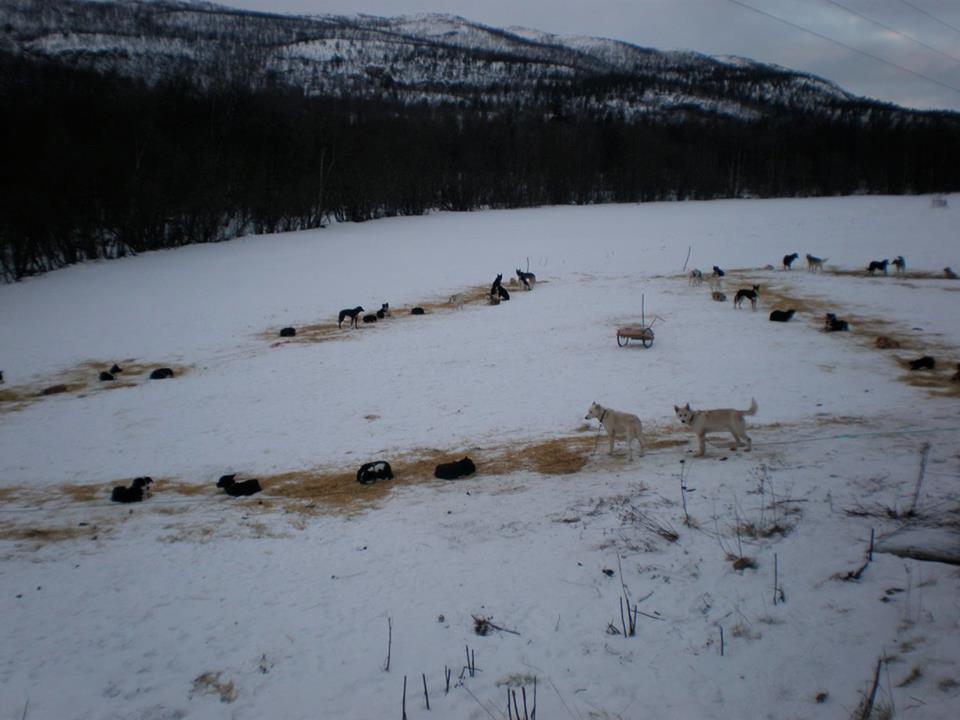 How the dogs sleep, tied up in lines in hay-filled holes in the ground. They curl their tails over their nose and tuck their pads on to their belly so they don’t freeze. They are that insulated that the snow can fall on top of them and doesn’t melt. 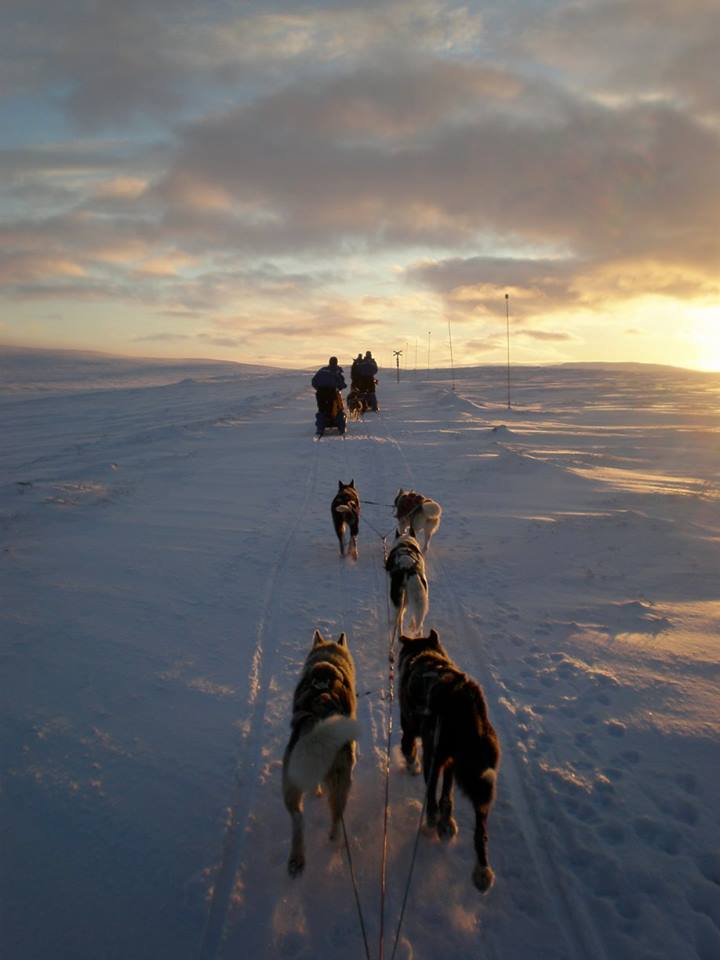 The sun was always low in the sky. Very beautiful. 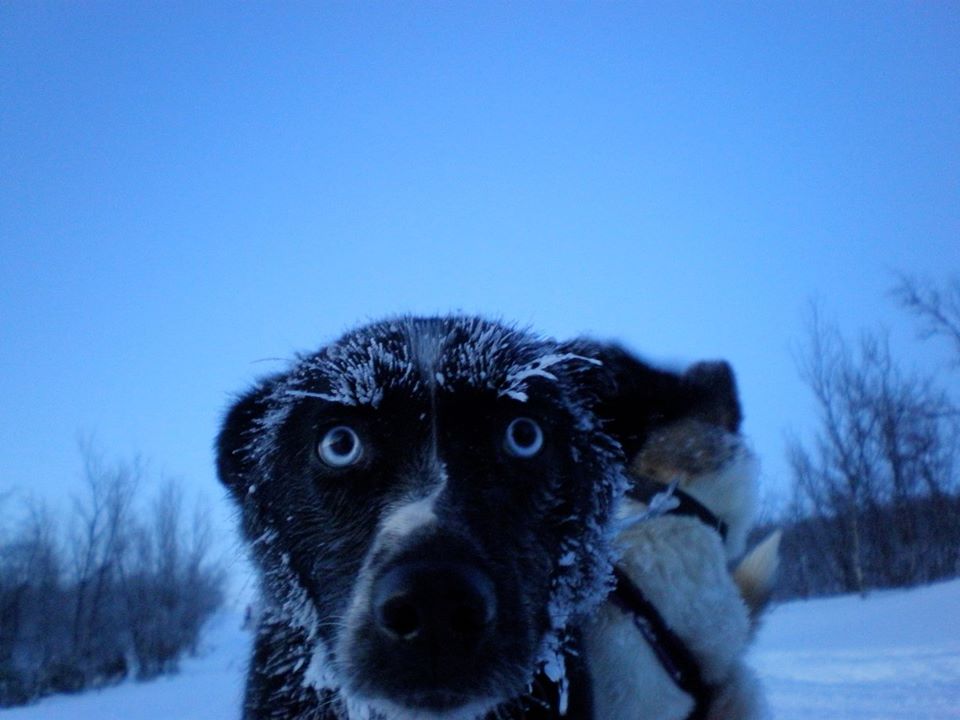 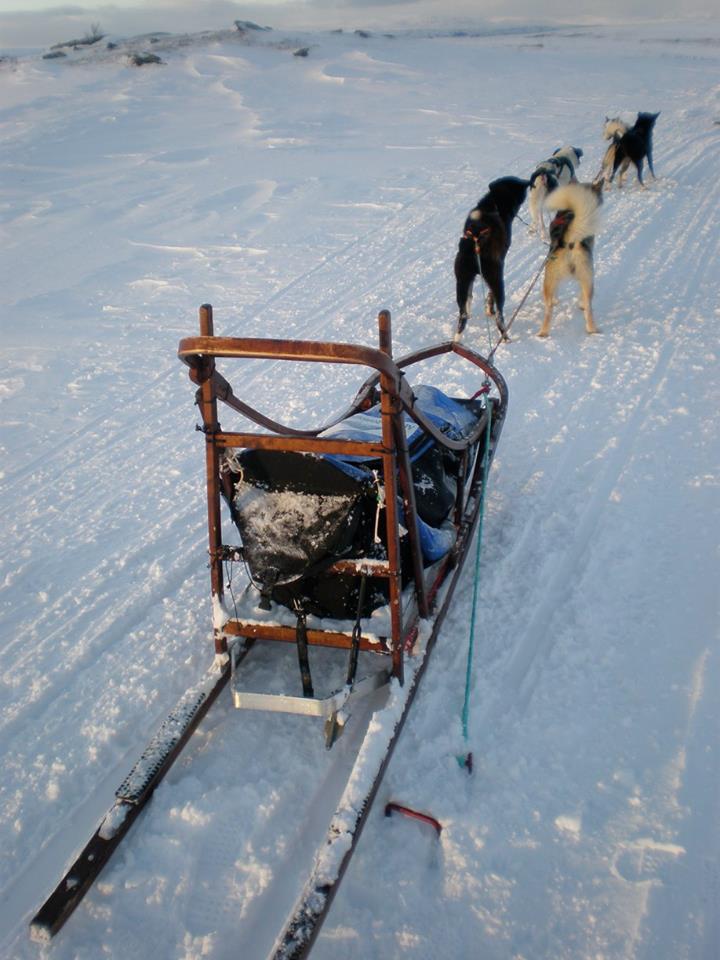 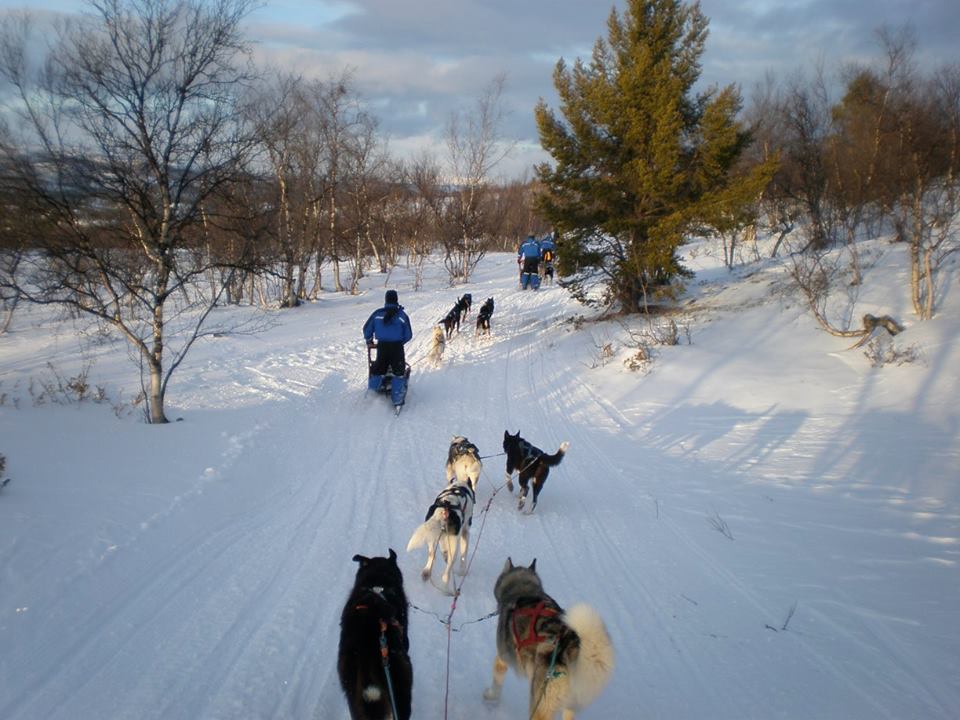 The woods were the best bit. The tree’s fly by, giving you an idea of how fast you are actually going. Felt like James Bond. 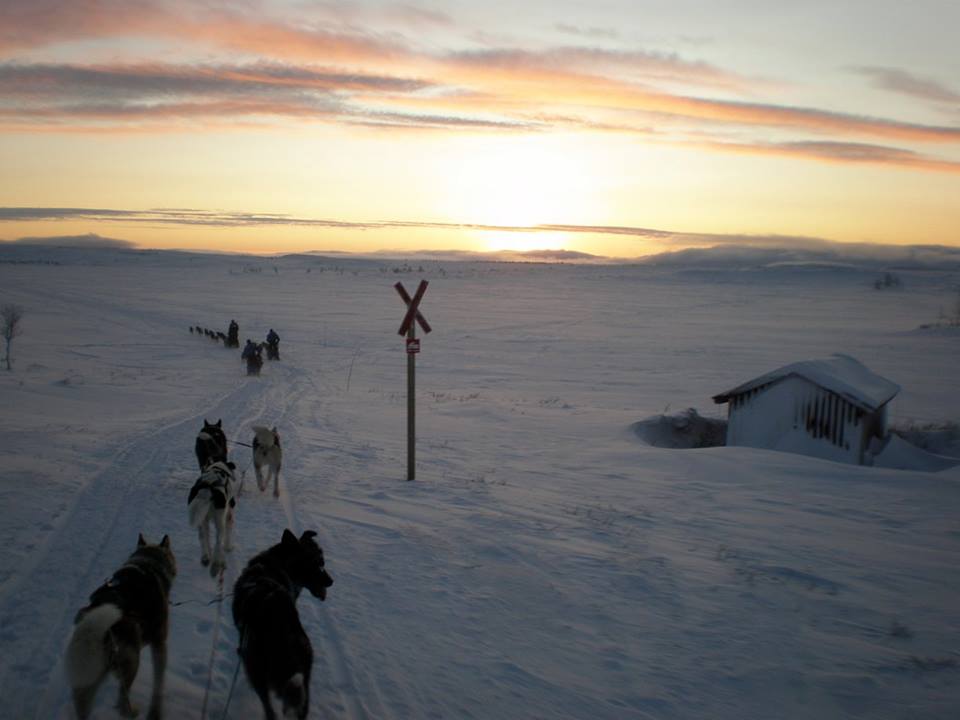 While these pictures may seem peaceful now, to give you an idea of how noisy it all is, check out this video for an idea of what we ate our frozen sandwiches in.