Dog Crates – How to Use Them Properly and a Handy Crate Size Guide!

Most pups are crate trained these days. Pups love their crate like a den as long as it is used correctly, and always positively! Never put your pup in anger if she is “naughty” as they may become negatively associated with their bed as a result. Her crate is a safe, hazard-free area where she will sleep at night and also a safe place to leave her should you be leaving the house for a bit. 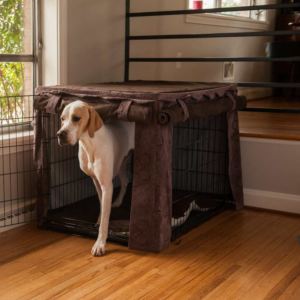 The top and side of the crate should ideally be covered with a light sheet (to block out the morning sun and offer privacy!!) and left in a quiet area of the kitchen or living area.

The crate should be furnished with a pup bed or some comfy bedding of whatever you prefer. In the first week their bed shouldn’t take up the whole crate, maybe half to two-thirds of it, leaving a bit of space for some absorbent towel or newspaper where the pup can have a wee, should she caught short in the first couple of nights.

Ideally, you will be given a rag from the pups previous home that will have his Mums and littermates pheromones on it. They love that and really settles them.

A few other bits might include a toy to chew and a large flat cuddly toy (akin to a littermate, they love to snuggle into at nighttime, just like she’s used to in kennels).

When the pup first sees the crate it should be all fun. They should be encouraged in and out of their crate using games, tidbits of meat treats and plenty of praise. This will create a positive association with the crate before her first bedtime. The door will be open during the day but will be closed at nighttime to keep her safe and secure, so you need to practice this. I would give a pup something nice to chew in the crate, close the gate and leave him for 5 mins. I might do this again for 10mins a few times and maybe longer after a little exercise.

Top tip: make them fight to get IN! Put one of their meals inside the crate, watch them trying to work out how to get in to enjoy it.

New pups should not be locked in their crates too long during the day. It’s not a playpen. You need to wall off a bit of your kitchen for that, as below. If you have a suitable pen you won’t need a crate, so whatever works for you. 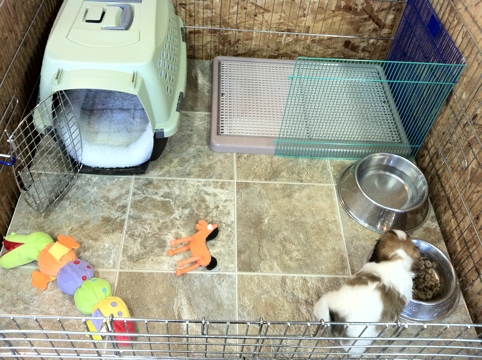 I personally crate and allow them to wander around the kitchen freely as kitchens are usually tiled and easily cleaned. Also, I’m good at toilet training puppies in that I really focus on it to sort it quickly, a throwback to my guide dog days! Once he’s house trained the door to his crate is left open at night.

Please make sure that everyone in the house knows that when at different times of the day the pup wanders into her crate for a rest, please leave her alone. Just like a child a tired pup will become irritable and more difficult to deal with as a result.

There are some simple steps to take to ensure her first night inside her dog crate is as comfy and stress-free as possible. First off, maybe take up their water a couple of hours before bedtime. Try keep them awake for a few hours before she goes in Ideally, give them a bit of exercise outside beforehand which will encourage them to empty their bowels. With yet another little treat, pop your pup into her prepared crate. Do this perhaps a half hour before bedtime so she can see you mooching about, getting ready for bed, but don’t give her attention and definitely keep things calm (no kids playing outside her crate etc). She should be asleep before you go to bed. Leave the kitchen, close the door and get ready for bed. Get ready Mum and Dad, she’s very likely going to cry. She’s used to sleeping with a big, snuggly litter. You have two options at this point

Allow it to happen: Prepare to be a little cruel to be a lot of kind. This means you let her cry for 5mins. Go back in, let her see you do something mundane without giving her attention and walk out again. You cannot give her what she needs, which is you, so don’t give her a little pat or you will feed and prolong her trauma. next you let her cry for 10mins and repeat. Then 15mins. Then 20mins etc. She will eventually stop. Then that’s it for the night. She stays there until morning. In the morning, take her out like a wet sponge, she will be dying for a wee if she hasn’t been already!! The second night will be easier, I assure you. Be brave.

Cortisol, the stress hormone, can make you want to poo (fight or fligth). So if they’re stressed the first night you might find a little, soft poo in the crate in the morning. It might even happen the second but rarely if ever a third.

Allow her to sleep close to you: Other people bring the crate up into their bedroom on the first night then move it gradually out of their room into the hall and eventually into their kitchen (or whereever your dog is going to sleep) after a week or two! That sounds good too but I have seen problems really set in that way, as opposed to fix them, but perhaps I was doing it wrong!

A lot of people get a bit confused shopping for the ideal dog crate so I’ve put together a list of dog crates and breeds that might fit into them! It’s not perfect of course, it’s just a guide, and I like to get a crate with a bit more space than they need, so there’s plenty of room to stretch. Up to yourselves. I’ve also trawled Amazon to find the best crates, with the best reviews at the best prices, for the first few at least, then they get so big the delivery is ridiculous and you’re better off picking one up in your local pet shop. When you click on the crate you’ll also see crate covers etc that will fit but I use a sheet as I’m cheap. Everyone knows it.

Breath Analysis, an Exciting New Frontier for Medicine, but old News to Dogs…

So You’re Getting a Pup, Part 2 – The First Two Weeks