I was so saddened to read a headline in the Journal.ie yesterday. It read “Epilepsy drug which has left 400 Irish children with disabilities to come under EU review today”…

The FACS (foetal anticonvulsant syndrome) Forum Ireland, an umbrella group of patients and disability organisations, estimates that sodium valproate has affected at least 400 children with birth defects and developmental issues since it was first licensed here in 1983.

The reason it struck me so badly was that a young member of my extended family was diagnosed by a GP with a very mild form of epilepsy. He used to stare for very short periods, apparently oblivious to people around him (I have been accused of that many times by my wife). The kid was prescribed drugs for two years.

I remember over a pint mentioning to the father that there was a strong link between gluten (wheat, barley, rye) and dairy with epilepsy. He considered it for a second, made a comment about how difficult cutting out those foods would be (it’s not) and thought he would go the drug root instead of “going nuclear”. His words.

It made me feel so profoundly sad, helpless and a little bit angry, all at the same time. Those trying to push a more natural idea on anyone BEFORE going drug have no doubt experienced this many times too.

Much of the emotion stems from the frustration that the doctor never, ever considered this an option (the kid has a permanent snotty nose, massive indicator, and their kids are generally chesty (lots of phlegm build up). It was worth a simple weeks test, but no.

The above article in the Journal coincided neatly with my latest fascination and recent research into the amazing powers of CBD oil. Too many people are in awe at Dudley’s rate of recovery –  is it the great diet, the physio, the hydro, the cool natural additions, him being in great shape or is it the CBD.

I have posted about CBD for dogs before, I urge you to check out that article. CBD (Cannabidiol) is one of more than 80 active cannabinoid chemicals in the marijuana plant. Unlike the main psychoactive cannabinoid in marijuana, TetraHydroCannabinol (THC), CBD does not produce euphoria or intoxication. Instead, cannabinoids have their effect mainly by interacting with specific receptors on cells in the brain and body: the CB1 receptor, found on neurons and glial cells in various parts of the brain, and the CB2 receptor, found mainly in the body’s immune system. Both you and your dog have receptors for CBD all over your body. 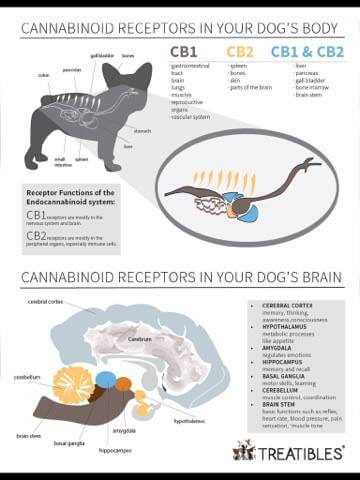 Unsurprisingly, CBD oil is repeatedly found to be effective in treating a great range of neurological conditions, simply helping those neurons and signalling systems in the brain to fire better, in the simplest of terms. So far, here’s what I’ve found:

A review by Grotenhermen and colleagues (2016) describes several clinical studies with CBD. In a study with 23 patients with therapy-resistant epilepsy (e.g. Dravet syndrome) were treated for 3 months with increasing doses of up to 25 mg/kg b.w. CBD in addition to their regular epilepsy medication. Apart from reducing the seizure frequency in 39% of the patients,

Another clinical study lasting at least 3 months with 137 children and young adults with various forms of epilepsy treated with the CBD. Here almost 50% of the patients experienced a reduction of seizure frequency.

The largest CBD study was an open-label study with Epidiolex in 261 patients (mainly children, the average age of the participants was 11) suffering from severe epilepsy, who could not be treated sufficiently with standard medication. After 3 months of treatment, where patients received CBD together with their regular medication, a median reduction of seizure frequency of 45% was observed. 10% of the patients reported side effects (tiredness, diarrhea, exhaustion; Grotenhermen et al. 2016 and references therein). CBD’s side effects were generally mild and infrequent

Other studies that show reduced seizures with it’s application.

CBD may be effective in treating children with drug-resistant epilepsy

Porter BE and Jacobson C. Report of a parent survey of cannabidiol-enriched cannabis use in pediatric treatment-resistant epilepsy. Epilepsy & Behavior 29 (2013) 574–577. 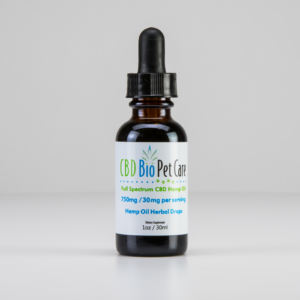 21 Parkinson’s patients were treated with either placebo, 75 mg/day CBD or 300 mg/ day in an exploratory double-blind trial for 6 weeks. The higher dose showed significant improvement of quality of life where the term “quality of life” is defined as mobility, activities of daily living (ADL), emotional well-being, stigma, social support, cognition, communication and bodily discomfort.

García-Arencibia et al. Evaluation of the neuroprotective effect of cannabinoids in a rat model of Parkinson’s disease: importance of antioxidant and cannabinoid receptor-independent properties. Brain Res. 1134(1):162-70. (2007)

A double-blind, randomized clinical trial of cannabidiol vs amisulpride (one of the most effective treatment options for schizophrenia), a potent anti-psychotic in acute schizophrenia, was performed on a total of 42 subjects. While both treatments were effective (no significant difference in total score), CBD scored less side effects. The CBD group showed less serum prolactin increase (a predictor of sexual dysfunction), fewer extrapyramidal symptoms (these include symptoms such as continuous spasms and muscle contractions, motor restlessness, rigidity and slowness of movement, tremor and irregular, jerky movements) and less weight gain

GW Pharmaceuticals of September 15th, 2015 described 88 patients with treatment-resistant schizophrenic psychosis, treated either with CBD (in addition to their regular medication) or placebo. Important clinical parameters improved in the CBD-group
Grotenhermen et al., 2016

CBD was able to prevent the development of a social recognition deficit in alzheimers transgenic mice.

…as well as a number of other studies proving it’s efficacy with Alzheimers….

CBD oil reduced the severity of spasticity in MS patients.

CBD oil for Anxiety and Stress

CBD has shown therapeutic efficacy in a range of animal models of anxiety and stress, reducing both behavioral and physiological (e.g., heart rate) measures of stress and anxiety

In a laboratory protocol designed to model post-traumatic stress disorders, CBD improved “consolidation of extinction learning”, in other words, forgetting of traumatic memories.xxxvi

The occurrence of various degrees of GVHD (Graft-versus-host disease (GvHD) is a medical complication following the receipt of transplanted tissue from a genetically different person) was compared with historical data from 108 patients who only received the standard treatment. Patients treated with CBD did not develop acute GVHD. In the 16 months after transplantation the incidence of GHVD was significantly reduced in the CBD-group.

Intraperitoneal application of 5 mg/kg b.w. CBD every 3 days for a total of 28 weeks, almost completely reduced the development of metastatic nodules caused by injection of human lung carcinoma cells (A549) in nude mice. In this 5-week study, 100 mg/kg CBD was administered daily i.p. Tumor volume was reduced by 60% and no adverse effects of treatment were described in the study

They used the cancerogen azoxymethane to induce colon cancer in mice. The high CBD concentration led to a significant decrease in polyps and a return to near normal levels of phosphorylated Akt (elevation caused by the cancerogen; Fowler, 2015). No adverse effects were mentioned in the described study

There are also several pre-clinical reports showing anti-tumor effects of CBD in cell culture and in animal models. These studies have found reduced cell viability, increased cancer cell death, decreased tumor growth, and inhibition of metastasis (reviewed in McAllister et al, 2015). These effects may be due to the antioxidant and anti-inflammatory effects of CBD; however these findings have not yet been explored in human patients.

CBD oil and it’s lack of side effects

A review of 25 studies on the safety and efficacy of CBD did not identify significant side effects across a wide range of dosages, including acute and chronic dose regimens, using various modes of administration.

A review of potential side effects in humans found that CBD was well tolerated across a wide dose range,
Bergamaschi MM, Queiroz RH, Zuardi AW, Crippa JA. Safety and side effects of cannabidiol, a Cannabis sativa constituent. Curr Drug Saf. 2011;6:237–249.

Now don’t tell me, if you (or your dog) was to suffer a condition, such as epilepsy, a simple diet change and CBD oil is not, in the very least, worth a go.

I recommend www.recoverycbd.ie for CBD oil. Neil, the owner, sells a high grade (price is no indicator, how it is extracted, what parts of the plant they use etc, is of the utmost importance). It is what Dudley is on.

Herbs to Reduce Stress in Dogs

Turmeric For Dogs – How to Make Golden Paste