Once McDonalds brought out the salad, they were doomed!!! 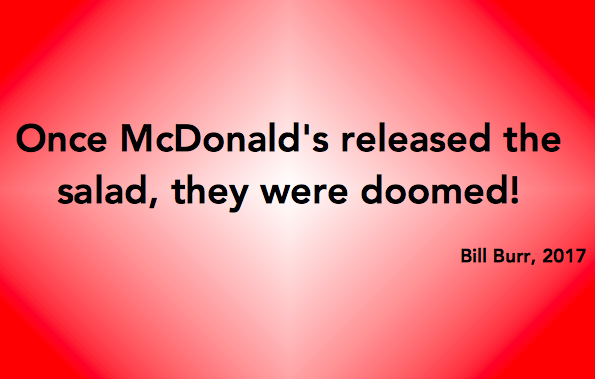 “Once McDonald’s brought out the salad, they were doomed”!

These are the words of Bill Burr, my favourite comedian. He was being interviewed on the Tonight Show when he took the perhaps unpopular stance that he felt sorry for McDonald’s. His point was that once they started serving healthy options like salads and sliced apple they were practically admitting to the world that their food was fattening. In this way, Burr felt they were giving in to fat people who were blaming McDonald’s for their massive waistlines. In his own unique way, you have to admit he has a point. Of course, the food is fattening. It’s a burger and chips!

As Burr explains, the problem is not a tasty cheeseburger, it’s 15 tasty cheeseburgers (and a general lack of movement). What did you think would happen?! He pushes the boat out further by suggesting it could be another example of survival of the fittest, whereby the people that eat themselves into an unsightly frame and early death are giving themselves less chance to contributing to the gene pool, which is a good thing for the rest of us…but for the sake of all the snowflakes out there who have zero sense of humour and would find such a thing offensive, perhaps we should leave Bill Burr there and come around to why I’m talking about this in the first place.

I was in a pet shop during the week and I notice one of Ireland’s favourite, low-cost, high-grain content pet foods (Red Mills), made, somewhat unsurprisingly, by one of Ireland’s biggest grain processors (grain production and canine nutrition being such obvious bedfellows), was now offering a high-meat content dry food in their range. The pet shop owner informed me it was selling well. I’m not surprised. Every pet food market indicator out there is telling us that consumers now want more meat for their meat eaters. But more to the point, it’s such a clear admission of the way things are going that I had to laugh, albeit temporarily, before the usual black fog of hate and disgust slowly descended over my mind regarding the implications of this move.

Only a company with zero interest in canine nutrition and animal welfare in general can have a high meat protein and zero carb diet out for dogs, one that is selling well for the premium markets, and at the same time have a very high carbohydrate (and dangerously low “meat” content) for the supermarket shelves. You cannot defend it beyond a need for profit.

As customers are now getting educated as to the implications of such a terrible diet for their pets, they are now looking for more suitable alternatives. This has resulted in the pet food market shifting towards raw dog food at best or significantly inferior meat-based dry foods (nothing replaces fresh food but, moreover, many of these meat-based dry foods, certainly the ones made by companies with a history of using lots of cheap grain, will use meat-meal, which I strongly recommend you avoid in your pet’s diet). This poses a slight problem for the supporters of cereal-based pet food industry, including both manufacturers and vets, who until now have been telling us that dogs and cats, animals that have zero requirements for carbohydrates, actually to best on very high carbohydrate diets (all without the benefit of a single study in support).

Now, the pet food / veterinary industry can’t simply hold their hands up and say “it’s a fair cop, sorry, we’ll adapt” they will first fight the notion that fresh, biologically appropriate food is good for an animal. It’s a multi-billion industry, after all. They will do this directly themselves from their science arms (e.g. “The Waltham Centre for Pet Nutrition”, owned by Mars, and “The Morris Institute”, owned by Nestle, makers of Hill’s Science and Prescription diets, who published the Small Animal Clinical Nutrition, which is used exclusively by vets as the basis for all their canine nutritional understanding) or the likes of the Pet Food Industry Magazine, not to mention the veterinary universities whom the pet food companies cash sponsor.

Their favourite topic in this regard is the “safety of raw dog food” all while, very typically, ignoring the terrible issues in their own products, including:

One exceptional bit of BS that was the following line by Will Henry, director of research and development for Extru-Tech Inc., who was speaking on “Pet Food TV” at the Petfood Forum 2016, recently highlighted to me by my trusty correspondent Harry;

Will was enthusing that using even more meat could be dangerous for the poor manufacturers who have to press a go button on the big automatic line that loads the rendering vat (a device that uses high pressure and heat to highly effectively kill all bacteria) with the toxic filth commonly used in dry pet food.

Will’s not on his own though. Recently we had Debbie Phillips-Donaldson (editor-in-chief of Petfood Industry Magazine) explaining to anyone that would listen why “too much protein” might be a problem for our little meat eaters.

The industry will first fight the whole notion of high-meat diets for meat eaters but once fighting it becomes so unpopular that it begins to affect their bottom line, they will slowly bring out a range of more suitable products, often under different names or by buying up companies, like Nestle moving in on the wonderful Orijen for a figure of approximately $2bil (there goes a great dry food). They will then, assumedly, start re-educating our vets that, thanks to their on-going (market) research….yada yada yada.

In this way, over time, the whole notion of choosing a dry, processed diet made by companies with despicable reputations in human food production over a fresh, biologically appropriate diet for the animals in our care will become as questionable as humans waddling into McDonald’s with their children every day for their dinner.