The Ever-Evolving World of Canine Nutrition…

I heard recently that Einstein once gave a test to his physics students but the questions were the exact same as the year before. Considering the students were now a year older and, presumably, better educated in the physics realm, an observer thought they’d bring the matter up with Einstein before he made an embarrassing error. Einstein’s response was, and I’m paraphrasing here, was “while the questions may be the same, the answers now are different”.

I love this. It perfectly encapsulates every scientific discipline, certainly the ever-evolving world of canine nutrition. The reason this subject excites me so much is that there is so little known. With only a few guiding studies concerning fresh canine nutrition, we’re still only skimming the surface. The rest is hypothesis based on collateral evidence, a mish-mash investigation of the diet studies, research using dry fed populations and an analysis of their physical biology.

In fact, an important distinction must be made here. A scientific hypothesis is basically an assumption based on the evidence available. It is not to be confused with scientific theory, which is much closer to fact. A theory is a hypothesis that has been thoroughly tested from various angles by various people. If you can’t refute it, it makes it will make its way into scientific theory, though some magic process I don’t really understand.

That dogs and cats NEED fresh, biologically appropriate food is surely in the realm of scientific theory, in that the alternative has never, ever been proven by anyone, but what is the IDEAL dog diet in this regard is still firmly in the hypothesis realm. 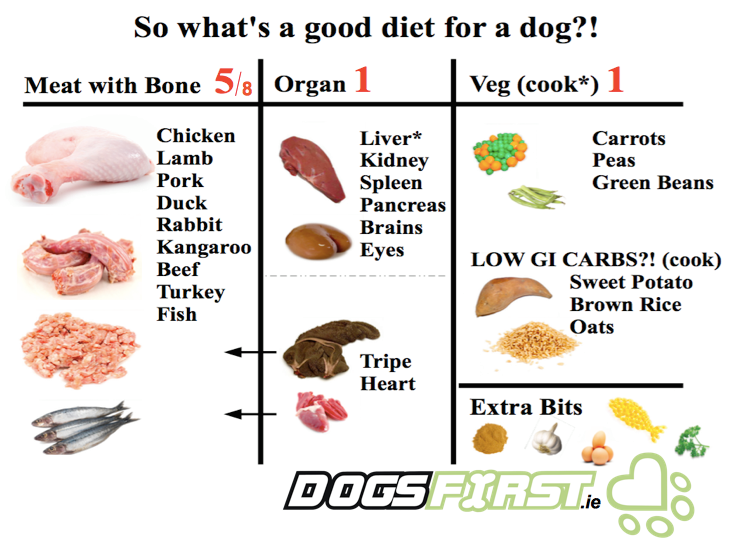 This infographic I made around 10 years ago. In it, it suggests that veg might be cooked and the veg listed were carrots, peas and green beans. This was before and whilst I had my dog food company. I was teaching folk the quick and easy way to make great dog food if they couldn’t afford mine and a bag of green beans, peas and carrots are a cheap, an accessible staple in supermarkets at the time.

IF you were using carbs, something I have never recommended be included normally in the dog’s diet BUT there are instances where they might be employed, e.g. if the pet owner is so broke that their only other option is a horrible dry food with 50% rapidly digested carbs, well then yes 25% slow-to-digest carbs you whip up yourself in on top of a good diet, slashing your food cost, would be greatly preferred to that alternative. At the time, I suggested brown rice, oats or sweet potato. 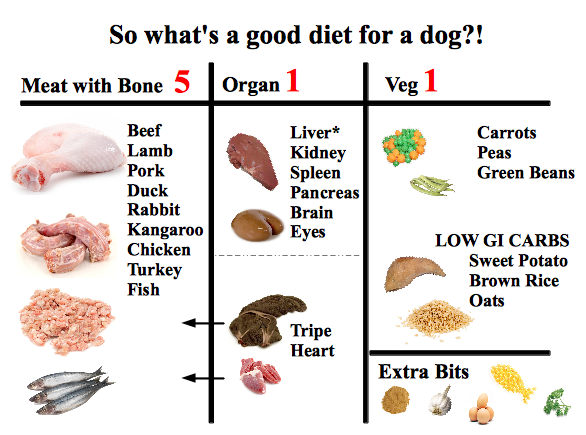 Within a year or two that IG had been tweaked to remove mention of cooking the veg. Blitzing the raw stuff would be better. Not that you can’t feed the cooked stuff, of course you can, it’s just raw blitzed is slightly better (water-soluble vitamins B complex and C are lost with a light cooking, though not if you feed the juices it was cooked in, and that’s about it!), but you need to put out the ideal info. I left the carbs bit alone if you feel you have to use a few, those were still the recommendations.

The main part of the diet though, the front end I call it, remained the same. Lots of meat muscle, bit of organ, bit of bone. Together with the “bit of veg”, it results in a very rough ratio of 5:1:1:1, something that the majority of leading canine nutritionists sort of agree on. It seems less and less are sticking to the Prey Model alone, largely as more and more info is coming to light (for more on the science check out why we might feed veg and some fruit to dogs. 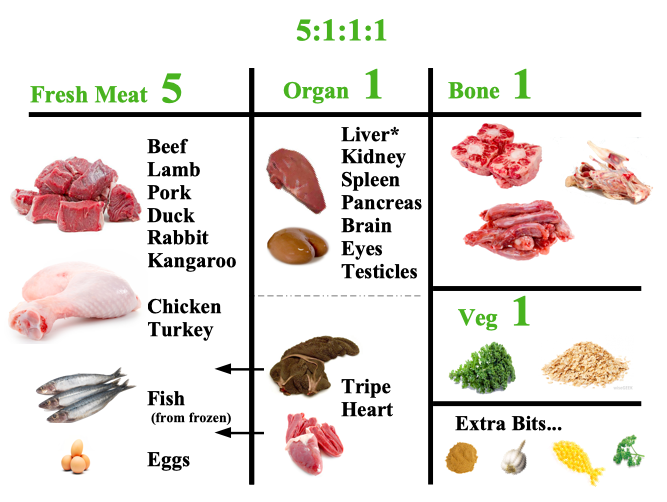 These days the info with the ever disputed veg portion has moved on slightly again. These days I mainly recommend only dark leafy greens, blitzed up. It seems more natural. You can still use the likes of peas and carrots and whatnot, and I do though not every day, they’re higher in rapidly digested carbs (a.k.a. sugar), which you want to avoid in dogs. It’s why I don’t recommend fruit in the diet really, bar a handful of dark berries which studies show are brilliant for dogs, as they are in the rest of us.

On the carb front, we’ve moved on here too. While we’re still cooking the carbs, gone is brown rice, initially because of arsenic concerns (don’t be worrying too much about that unless you live on it), but more importantly, it packs a fairly hefty carb load and is low in protein. That’s unnecessary and we can do better these days. Folk now recommend things like couscous (the food so nice they named it twice) as it’s higher in protein. Perhaps even better than that again would be amaranth. This looks like a little round grain but is actually a little round perennial plant. As such it is higher in protein and fibre.

Oats are still OK, for sure. High in fibre and protein but also a nice range of other nutritional bits such as manganese which is so deficient in most raw dog food diets as well as various antioxidants, the most famous of which are called avenanthramides which are a potent antioxidant. All taken together, studies show oats are great for the skin (oat baths great or itchy skin, for example, pack them into a sock so they’re not sitting in actual porridge!) and here they offer folk a quick and easy carb source, should they need it.

But then I got asked recently why I was using sprouted oats! It’s a fair question, particularly when a blogger pens a piece on why you should use sprouted oats over the ordinary kind, which can become indoctrinated on folk, particularly when it makes sense! While recently sprouted anything is very surely more nutritious that the seed or adult alternative (packed with antioxidants, vitamins and minerals, they offer a seriously dizzying array of nutritional benefits), they are harder to find and sort of miss the point of why anyone would use carbs in an animal that doesn’t require them – they’re trying to save cash. Sprouted anything in a plant pot outside though are a great idea. With ZooPharmacognosy in mind, your dog will graze them, should they want / need them, and they are best positioned to determine that, not you. For more here check out our Pet Herb Garden idea, lots you can do here, from a nice, clean, fresh source of grass, maybe some mint, some german chamomile (a potent natural anti-inflammatory), whatever you (or they) like!

Sweet potato is still on a fence I think but it’s really high in fibre and contains lots of cool stuff, such as anthocyanins (give orange veg their orangeness) which is a cracking and very proven antioxidant, operating on many levels throughout the body. Lightly steamed sweet potato cubes (with skin on) are excellent for constipation in dogs too, so I’m still a fan of this stuff occasionally.

But just to reiterate, while I like to mix some of Dud’s cold meat brekkie with a little of my warm porridge on a cold winters morning, carbs aren’t something I recommend in dogs. This is the weakness of a simple chart like this, it often takes a little explaining. The nuance of the argument can be lost in our modern rush for the quick, simple yes or no answer.

This is what Einstein was getting at. While the basics of canine nutrition may remain largely intact from ten years ago (hypothesis slowly moving towards theory!) there is always new information coming to light, demanding we reassess and make tweaks along the way. You should take solace from this. We’re all feeling our way here. Few of us are rarely very right for very long. But that’s what keeps it all so interesting, the answers are always changing.

Win a YEAR Supply of Treats for Your Dog!!!