Thiamine (Vitamin B1): Why Dry Pet Food is so Deficient so Regularly and a Warning to Raw Feeders Concerning Raw Fish…

Thiamine (vitamin B1) is an essential nutrient for dogs which means they can’t make it themselves. It functions in the energy department. A lack of it can result in fatigue, weakness and weight loss in your dog. Over time a deficiency it can result in neurological issues such as an abnormal heartbeat, seizures and paralysis, death too. Known as beriberi in humans, a Polish physician with the rather envious name of Cashmir Funk first discovered thiamine via deficiency experiments in dogs in 1912.

It thus should come as with some alarm to dry feeders that a thiamine deficiency is one of the most common nutrient deficiencies in ultra-processed pet food. Taken from my forthcoming book “Raw Science”…

Thiamine (vitamin B1) appears to be one of the trickiest nutrients for manufacturers. AAFCO (2008) states “because processing may destroy up to 90% of the thiamin in the diet, allowance should be made to ensure the minimum nutrient level is met after processing”

Manufacturers are aware of this and so include lots of thiamine mono-nitrate to replace all the vitamin B1 that they know will be destroyed during processing. Sadly, analysis of major pet food recalls over the eight years to 2017, for just vitamin deficiency/excess, all of which occurred in dry and canned pet food, reveals that thiamine is at the centre of five of them. (For more details see www.fda.gov “Animal and Veterinary Recalls Archive.”)

Of course, this is only IF an issue is detected. For example, it was astute researchers at Michigan State University’s Diagnostic Center for Population and Animal Health (DCPAH) that led to the recall of Blue Buffalo dry food in 2010 for dangerously high levels of vitamin D. They began receiving samples from all over the country from hypercalcemic dogs. DCPAH endocrinologist Kent Refsal thankfully noticed a pattern and the team investigated further by telephoning the individual vets in charge of each case. Once the common factor was identified, they alerted the FDA who sprang into action. Four years on the situation is no better. Markovich et al. (2014) observed a wide range of thiamine concentrations in pet foods evaluated. 12 of 90 pet foods were below the minimum protocol set out by AAFCO. They concluded that clinicians should consider thiamine deficiency as a differential diagnosis in cats with acute neurologic dysfunction.

While there is LOTS of thiamine in most raw pet foods, certain fish will cause problems…

There’s loads of thiamine in most raw foods as they are not processed. However, some fish contain an enzyme called thiaminase which, as the name suggests, breaks down thiamine, making it unavailable to the body. Even small amounts of this enzyme can play havoc with thiamine levels. Hence it is strongly recommended that no raw feeders or “complete” raw product are based on fish that contain thiaminase. I did a quick list of the more common types below in a chart, hope it helps. 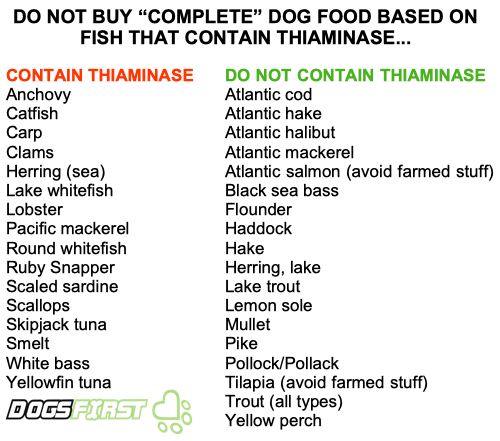 So, if your premade says it contains “whitefish” you need to ask them what species are in there.

Salmon is OK thiaminase-wise, but then you are feeding large amounts of the most intensively, drug-treated animal out there. Watch this Panorama exposé and tell me that’s something you want your dog eating full time. 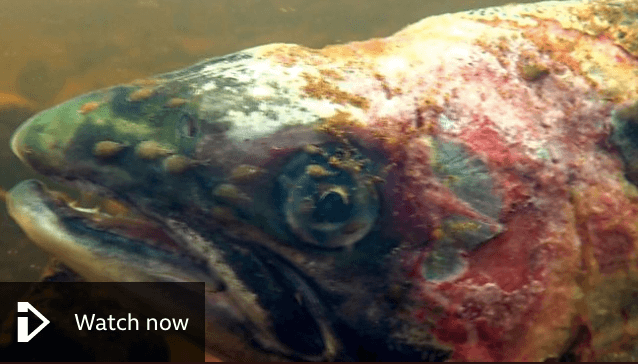 Then there’s the issue of what they’re fed. Salmon are top predators. They eat other fish. Most farmed fish are fed meal pellets made up of an assortment of garbage but some of the better kinds to grind up lots of really small fish in there. What results is a bioaccumulation of nasty crap in the salmon fat, including heavy metals and PCB’s and all sorts that we have poisoned our oceans with.

I recommend not using too much of it (in their diet or yours, toxic crap and destroying the environment).

An Important Note on Fish Oil Supplementation in Dogs

The Ever-Evolving World of Canine Nutrition…

The Epigenetic Effect of Food, Part 1 What we Have Overlooked in our Pets