Alabama Rot in Dogs, can we all Just Relax a bit…

A hot topic zooming around the internet at the moment is Alabama Rot in dogs of the UK. This is despite the fact that zero cases of Alabama Rot have been actually confirmed, that reported cases still number below 80 (in a nation of 10mil dogs), that all reports are emanating from a single veterinary website. Why?!

One reason is that we are living in an age where stories like Alabama Rot (I mean, it’s a pretty cool name) gruesomely killing our dogs provides excellent copy for online news websites, each struggling to produce something meaningful (share-able) to say.

Take for example that gold standard of news sites, the DailyMail.co.uk. These guys are now putting out 1200 stories EVERY DAY. This is a massive undertaking. Each story has to be interesting or their readers will go to other sites that can give their fix. To rise to this challenge these online rags employ digital marketeers to dig up what’s trending online and what, should they print it, would be shared by their followers, boosting their online profile (and ultimately increasing their advertising revenue).

This results in the online rags competing for the gruesome scare factor. Pets are an easy target. Every major paper online is now talking about a DEADLY DOG DISEASE  SWEEPING THE UK (see the Daily Mail, the Birmingham Mail), pet owners advised to be on RED ALERT (the Express). ITV went for the even scarier FLESH EATING headline.

Willam Buckley, his thoughts about what makes TV, 1965

I am reading on forums that people are afraid to take their dogs out for a walk in their local forest because of the dreaded Alabama Rot lurking in the shadows. This is what happens.

What are the Facts on Alabama Rot?

All the papers and online sources warning of us of Alabama Rot use the same source to support their story, a veterinary group called Anderson Moore Vet Clinic in the South of Britain. The vast majority of theri cases (52 of 71) arose from a simple report they produced in 2014, where they speak of “suspected Alabama rot”. The unpublished report, now cited as references by other vet sources, and of course the papers, didn’t actually confirm a single case of the disease. Instead, to date, there has been “71 possible cases”. They state;

This is a red flag. What they are saying is that they did not diagnose Alabama Rot. They suspected / diagnosed CRGV.

Rather these dogs were showing symptoms that were very similar. Alabama Rot was originally a disease of greyhounds all the way over in…you guessed it, Alabama. It was caused by a reaction to toxins produced by a bacteria, likely a weird strain og E. coli.

The disease they are talking about in the UK looks very similar (lesions around the feet, kidney failure) so they are giving it the same name. However, it is not Alabama Rot. These are cases of Cutaneous and Renal Glomerular Vasculopathy (CRGV). Lots of things cause CRGV, a disease where over time little lesions caused by blood clots appear on the skin and 4 days later your dog is possibly dead from kidney failure. Bacteria is one sure cause, as was the case with Alabama Rot, but it can also be caused by side effects to drugs, food and plants.

Asides the Anderson Moore reports, there has been one other single report that I can find, and that is in Ireland.

a case of Cutaneous and Renal Glomerular Vasculopathy (Alabama Rot) was recently identified at UCDVH. This dog presented with a large, necrotic ventral skin lesion, lethargy, inappetence, vomiting, icterus (jaundice), thrombocytopenia (low platelet count), azotaemia (high kidney parameters) and increased liver enzyme activities. The owners live in Ranelagh and the dog was walked in the Massey Woods in the days prior to presentation. The case was managed at UCD in early February 2017, but the final post mortem result was not received until this week.
http://www.vets4pets.com/stop-alabama-rot/

As with the Anderson report, this again is not Alabama Rot, but a mysterious case of CRGV, where the symptoms are extremely similar to Alabama Rot.

That’s it. No other reports.

This isn’t an outbreak of Alabama Rot, or even CRGV to be fair,  but an outbreak of the same regurgitated scary story for your viewing pleasure. Sadly, when something is said often enough online it inevitably percolates into the subconscious.

Whatever is causing these cases, it is highly unlikely to be a bug sweeping the UK (and now Ireland?) which you can prevent against, though I’m sure the drug companies are undoubtedly considering it. The reason we can say this is because a) no bacteria has been found to be the cause and b) it is so highly unlikely that a mysterious strain of E.coli has popped up in all these separate areas in and around the same time.

These cases of CRGV in UK dogs are so far unexplained. Theories range from a possible reaction to a very dodgy strain of E.coli floating about to the side effects of a drug.

The Whole Affair Reminds me of the Various Reported  Leptospirosis  “Outbreaks”…

The word “confirmed” is thrown a lot these days, often very casually. Take for example Leptospirosis. In the UK, a masters student set out to discover the true incidence of Leptospirosis in the UK. They sent questionnaires off to 400 vet clinics though just under 100 engaged. Over a three-year period, they found less than 15 verified cases of Lepto, and no clinic saw more than one case. While we must be careful as outbreaks I’m sure can be localised and missed by such a study, 15 cases is very, very far from “outbreak” levels often reported in some veterinary forums. When we consider the Nobivak4 vaccine killed 125 UK dogs in that same period, you would be forgiven for doing a risk-benefit analysis at this point.

More on the leptospirosis in dogs here.

Then there was the “Big Tick Project”…

A large scale study of ticks was undertaken in the UK, apparently reputable on the outside. It was conducted by Professor Wall of Bristol University and entitled “Ticks infesting domestic dogs in the UK: a large-scale surveillance programme”. Sounds good. I hate ticks. And look at the scary picture! 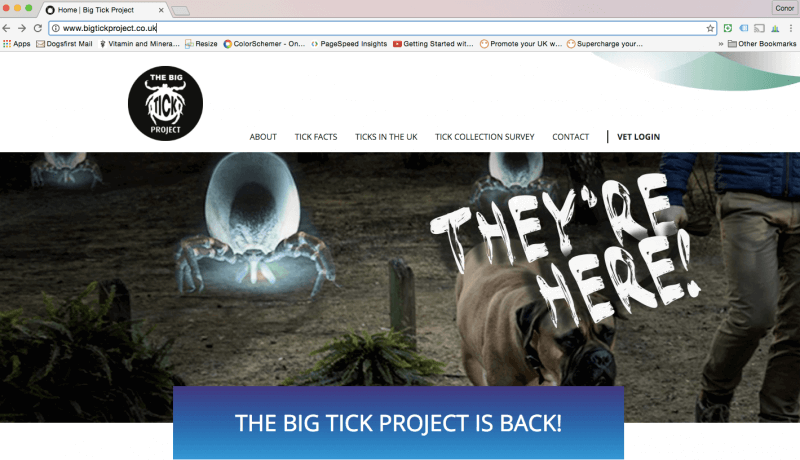 The scientists involved apparently CONFIRMED a staggering 31% of 15,000 UK dogs having ticks! Towns and cities and hot zones all named, as we see with this Alabama Rot. The media took hold and did their bit. I’m sure many a tick treatment was purchased.

I did a little digging. This “study” on tick in dogs in the UK was never published, so as usual this is your first red flag. To publish your results you have to hand them over to people for scrutiny. Often these people have morals far greater than the companies producing loaded reports, so they are your primary filter for bogey information. It’s really hard to publish results, you need a good solid, fair study behind it. Thus bogey studies are less likely to make the cut (though many still do).

Then I find out that MSD sponsored it (they make chemical tick treatments). This is a massive red flag.

Shame on the scientist and the university behind this. They are blatantly telling you the figures quoted are simply not reliable.

Alabama Rot in Dogs in Conclusion…

Something very serious and quite clearly deadly struck down those dogs during the years of 2012-2014. It was not Alabama Rot, it is CRGV. It is not a bug you can buy a chemical for.

Cutaneous and Renal Glomerular Vasculopathy killed these dogs but unlike Alabama Rot where the cause was known, the cause of these cases remains unknown. Persoanlly, my money is on a side effect to a drug.

The truth is cases of CRGV have likely always existed in the our dog population, as they do in us. Only now, thanks to the countless mass media sources spreading the story, it has a groovy name. In this respect, the main cause for this outbreak could simply be digital marketers working for the online rag newspapers. They monitor what’s trending, put their own spin on it and throw up crap stories with cool headlines. This in turn, fuels more stories on the subject. In this way, the whole story snowballs. This is likely not an outbreak of disease but of an exciting, dreadful story concerning an illness of no known cause in a tiny handful of poor dogs.

In the back of mind though, I always suspect it is the drug companies lurking, not a disease!

So, when people say to you cases were “confirmed” you need to find out who is confirming them. Find the source then read what they say. Was it published? Where? Who sponsored the study?

All is not what it seems online. In this way, the best thing you can do to protect your dog from all these disease lurking in every corner is to stop reading online rags. You cannot protect yourself from an invisible enemy of no known cause. If an outbreak was to occur in your local area then your local vet will tell you (and always press them, have they actually SEEN a case?!).