The US FDA Reports That Some of the Biggest Names in More Natural (Meaty, Grain-Free) Pet Food are Causing DCM in Dogs…

I’m really confused by this one. The US FDA releases the top 15 dry foods most associated with DCM in dogs according to the reports they are receiving (so they have not actually done any investigating here, it’s just “what they’re hearing”, so to speak, so these companies are innocent until proven guilty). The leader board might surprise you, in that Acana is number 1 with 67 cases, Taste of the Wild is number 3 with 53 cases but even Orijen dog food is on there in 12th with 12 cases, which is a bit of a conundrum.

DCM (Dilated Cardio Myopathy) is a heart condition which first rose to prominence in the 70’s when the meat (and thus taurine) content of pet food hit the floor. Thousands of cats (and likely some dogs, though they are less affected) started going blind and dying until eventually the dry food sector pulled its socks up and fixed the issue by adding taurine from a conical flask into their nutritionally defunct crackers.

But excluding breed effect which is also a big factor, there are many nutritional causes of DCM in dogs, not just that they use less meat/taurine in the mix but the type of fibre you use in pet food can mess with how well the animal can reabsorb the bile in their intestinal mix (where a lot of their taurine comes from) and of course there is the effect of cooking.

As a result, there have been “outbreaks” of DCM a few times since, 100’s of cats and dogs killed here and there, always cereal-based food, but the latest case was in grain-free food.

This must have been a godsend for the cereal-based pet food sector who of late have been watching as sales of their desperately poor food products slump in the face of more natural, meatier pet foods and of course, raw. It was assumed, by the sheer volume of info we received about “the dangers of grain-free” that the CB sector put a lot of effort into publicising through their favourite channels just how dangerous these products are.

Taurine is the second most common amino acid in meat (and most abundant in the heart). Hence it is thought that the more “meat” used in pet food (it’s hard to call the animal ingredients used in dry pet food meat without using those commas) the more taurine it has the less DCM you will see. So, while it’s not surprising to see say Taste of the Wild up there, it’s mostly meat meal (thrice cooked meat waste) and carb filler (albeit potato etc), it IS surprising to see Acana top the list. Acana used a decent amount of fresh “meat” in their mixes (27%) and significantly fewer carbs than most grain frees. However, they do use lentils. Is that the issue? 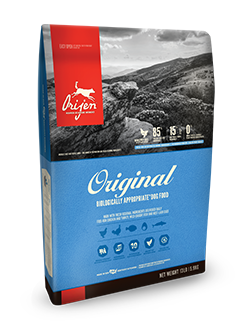 Those aside, I have to admit that the fact Orijen, which recently topped our list of Top 10 80:20 Pet Foods out there, made the DCM list above is a BIG surprise to me. It is all real meat. No meal. No carb filler. Looking at those ingredients, where each one is packed with taurine, far more than your average dog or cat would need, how the hell are animals suffering a lack of taurine on that mix?!

The only factor left is cooking. If you are using lots of leftovers (at best) and waste (at worst) from the meat industry, you are going to be handling ingredients very high in micro. The only solution for more natural-minded manufacturers, who refrain from using the copious amounts of anti-bacterial chemicals commonly used in cereal-based dry food to preserve it for the months and months of storage, is a cooking step.

Even if your product says “cold pressed” or whatever, the truth is they HAVE TO hit the food with some high temperature to sterilise it. Natural preservatives are simply not enough to get the hazardous microbiology content of the mix down to zero before packaging. This is why I find mention of these cooking temperatures a little disingenuous.

Perhaps some pet food manufacturers are cooking their mixes too much? I can’t see another reason, not one that works across brands. If this was the case, then the list published by the FDA above may simply be a list of the more popular dry foods currently being fed in the US?

More to the point, I am very, very, very suprised the likes of Hills / Royal Canin are not topping the list?!! As historically, it is cereal-based foods (not those brands, per se) that are most linked to DCM in dogs (they use little to no meat, lots of cheap fibre filler, cooked within an inch of it’s life etc) AND they remain some of the most popular foods fed in the US to pets today. Yet still, on first glance, only the more meaty, natural products made the list above, the very foods that would be expected to be highest in taurine.

It turns out, when you read the entire FDA report (find it here), Purina had five cases, as did Hills and Royal Canin had one. This to me still seems too low but I am naturally suspicious of the FDA, and for good reason. The FDA handed over all regulation of the pet food sector to AAFCO, and these guys are essentially a board of the biggest pet food manufacturers, the result being AAFCO tell the FDA what it needs to be doing in terms of pet food patrol.

More natural, meaty, grain-free pet food still makes up less than 25% of the pet food market in the US. With raw still in its infancy over there, cereal-based pet food still dominates but their figures are shrinking all the time. Still, that this list isn’t dominated by the most popular cereal-based pet foods, a product we have to expect is more prone to taurine deficiency than meatier grain-free’s, screams to me that this list has been artificially skewed.

Why you might feed some vegetable matter to dogs…

A Note on Pet Insurance in Ireland & UK