In human health and nutrition, the burden of ensuring a product’s safety, efficacy and any claims of benefit is on governmental organisations that independently test drug and food product manufacturers. In dog health and nutrition this filter is virtually non-existent.

In short, pet food in the United States is regulated by a convoluted teaming of organisations such as the governmental bodies United States Food and Drug Administration (FDA) and the National Research Council (NRC) as well as non-governmental organisations such as the Association of Animal Feed Control Officials (AAFCO). While the FDA will investigate an issue if the victim’s owner can provide scientific proof that a particular bag of food caused it, a notoriously difficult, laborious and expensive process, it is the NRC and AAFCO that are most central to thought and standards in pet food safety and quality today. Their recommendations, in particular those of AAFCO, are what “complete” pet foods worldwide attempt to adhere to, including us here in Europe.

Sadly for dog owners worldwide, in the mid-1980s the US Government (for whatever reason…) shut down the NRC’s Subcommittee on Dog Nutrition, dissociated the regulatory agencies and turned the pet food industry completely over to AAFCO (Brown, 2006).

If you look at the front of any premium quality complete dry food it will stipulate “meets International standards set by AAFCO that substantiate this product provides complete and balanced nutrition”, or words to that effect. This is to assure the customer. But who exactly are AAFCO? Well, AAFCO is a nongovernmental organisation (NGO). As it’s own website states, it has absolutely no statutory or regulatory powers whatsoever. It has neither capability to approve nor ban pet foods. It has no labs, no investigators, no laws and absolutely no teeth in a court of law (Martin, 2007). Its role is purely advisory.

Patrick (2006) noted similar infiltration of industry members on the Inspection and Sampling Committee, the Feed Manufacturing Committee and the Feed Labeling Committee. Extensively researched by Martin (2007), AAFCO holds a convention once a year to discuss and vote on issues relating to the pet food industry. It’s not uncommon to see more lobbyists from the pet food industry in attendance at these conventions than AAFCO members (Brown 2006, Martin 2007). So the boards of the one governing body overseeing the control of pet food production is heavily populated with dry food reps. This is not ideal.

Among its recommendations as of 2008 (available at petfood.aafco.org), AAFCO advises that:

AAFCO’s Guidelines do not Detect Dietary Deficiencies Over Time

Once the above criteria are satisfied, large-scale production begins. Not measured is skin or coat condition, plaque, gingivitis, gastric dilation, torsion, anal-glands, problematic behaviour and a great deal of other “non-nutritional” issues.!!! This is scary. Take for example Vitamin C, the most important vitamin in your body in terms of usage and quantity needed daily. If you were to completely deprive yourself of vitamin C, the most important vitamin (in quantity anyway), it takes as many as five months for symptoms to appear. Once apparent you can die in a week. Again, that is if you were to completely deprive your body of vitamin C. But how long would it take if you were to consume say 50% of your RDA over the course of years?!

While the ability of dogs to survive for six months on a complete commercial diet has been amply demonstrated by these manufacturers to date and is evident in today’s dogs around the world, studies examining the health effects of a processed diet over years is not apparently required before making “lifetime feeding” claims are made.

Presumably if a dog was to bloat it would be removed from the trial as two out of eight subjects suffering any such maladies can be removed from the 26 week test (or they might fudge the results). Nor is it required to retain this information. Only 4 blood values are taken. Measures must fall between predetermined minimal and maximal values. This should the minimum be 1, the maximum be 10 and the ideal be 5, a reading of 9 in a pup consuming the food for ten weeks is acceptable. Neither is the effect of the numerous food additives nor their combination on behaviour are not assessed either. Not that laboratories would be equipped to test problem behaviour in caged dogs at any rate, there being so many confounding factors in such an environment.

But it gets worse. AAFCO does not carry out checks or regulate these trials. Worse still these less than stringent tests are conducted in-house by the manufacturers themselves. Random investigations are completed by the relevant Departments of Agriculture but nothing concerning food quality or safety, only on the premises. So only when enough dogs get sick and if a vet pins this to a dry food product how unlikely is that?!) and if the dog owner has the means and will to go court to demand answers will the FDA step in to investigate (in the US).

As loose as the requirements are, many manufacturers do not even bother to test their food to this extent (or if they do, do not meet the requirements). In this case companies do not mention AAFCO on their labels and simply put a disclaimer in very fine print somewhere on the product or can that stating that the pet food is for occasional snack feeding only.

In this respect independent researchers agree that the pet food industry has not met any scientifically valid burden of proof or safety or that it deserves to carry lifetime, “complete” feeding claims (Hodgkins and Smart 2008, MacMillan 2008).

The below quote is very telling, considering where it’s coming from…

“…Virtually all pet foods contain unsubstantiated claims for safety, completeness and balance that no human food in the world would ever be able to…” 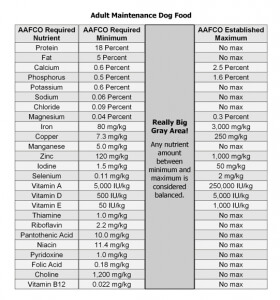 The AAFCO concept originated to get pet food off the floor during the 80’s. It was intended as a minimum protocol for manufactures to adhere to. Over time, and with pet food infiltration, these minimum guidelines have become an optimum for industry to achieve. Note that at the top of their nutritional guidelines table, AAFCO itself enthuses the word minimum in each section. Take a look at the minimum protein content recommended for pups (22%) and adults (18%).

Now go to your favourite bag of veterinary prescribed dry food and check how close to the minimum these companies are going. Most are actually at this minimum. Manufacturers and their reps now advise this level to be the optimum for dogs, maybe even warning you of the “dangers of too much protein” (see the “Too Much Protein Myth” for more here). This is all very convenient considering protein such as meat so much more expensive than say wheat.

The fact is the hefty majority of dry foods out there contain the minimum amount of protein you are legally permitted to feed to a dog, based on 6 out of 8 getting to the end of a 6mth caged feed trial and following some very flimsy examination of suitability by the manufacturers themselves. Worse still, as the link to “Too Much Protein Myth” above will show you, studies show the protein used in dry food is of such poor quality that not all the protein in these products are available to the dog. At best they can digest 75% of the protein in there. Now dogs are eating less than the minimum required for normal development over 6mths.

So Who Are The Pet Food Police?

Well it’s not AAFCO. It’s not the FDA in America. Nor is it any legislators in Europe. And it’s not your vet. The answer is you. You are the only person standing between your pet and crap pet products. Get educated and don’t trust anything with a picture of a dog on the front of it until you have really dug into what’s in it and who’s behind it.