The cost to buy a puppy during this pandemic is appalling. The greed of the sellers is disgusting.

If that’s true, and I assume it is, it’s a bad start to my Monday. I’m really, really angry. I wrote back something like the below:

Yes, people will always go for the cheapest / easiest way of getting a pup because they are completely, or at least willingly, ignorant to the consequences. The recent epidemic just highlighted this trend for us. However, their ignorance is permitted. Other countries that actually care about the welfare of their animals have better policies in place.

I had lengthy chat with Ciaran from the Dog Internet of Things last Friday. This guy’s a powerhouse. He’s trying to put in place an online responsible pet owner online exam across at least Irish institutions but is focusing on any country without proper regulation and thus a gross overabundance of unwanted pets (Ireland, UK, US). I’ll write about it another time but for now, it’s all based on his experience studying not only the Scandinavians (as I keep saying, with similar dog laws in place, this nation of 10mil people have just one pound) but Switzerland and Austria. While I may not have all the details perfect here – over there you have to jump through many hoops before you can get a dog. The license is a proper exam requiring study, they have to go to town hall for this, a vet for that. The annual license fee is not cheap and it’s obligatory and checked (why can’t our cops do this? NSC tech in a tiny tag in the collar can be scanned with phones. Or, if just to get it off the ground, you must have something like a driving license card with you or at home. Random checks once a year on the streets. If you have a license and you don’t have it on you, present it to your local station in the next 7 days or you’re heavily penalised). Crucially, in Austria, you have to go see a trainer and if they assess you can’t control your dog, they’re gone. Now you’re talking.

All this immediately filters out all the people who suddenly want a pup for something to do during an epidemic. You need to make real effort to get this dog. And if you are judged to be failing as a pet owner, he’s removed before you properly mess him up. You would never, ever be permitted to buy a puppy in Tesco car park in these countries. Good breeders don’t do this but then you’d have to wait for your pup, and that’s not fair. The kids are bored and want one now.

The fact is, 50% of the dogs in our shelters are from poor pet owners who did nothing to educate themselves in advance of the dogs’ arrival and then hand the dog in when he gets difficult. So 50% are coming in as “pets”. That’s the real disgrace.

It’s Not the Market’s Fault.  It’s the Governments Lack of Support …

But it’s not the market’s fault or even the horrible, selfish, inhumane greedy pulpy farmers (like pet owners, there are lots and lots of good breeders out there), people are thick and will always buy the cheapest and easiest, no matter where it comes from (your smartphone, cheap t-shirts etc, all made by miserable young slaves).

The problem is lack of enforcement and while our government continue to not only permit but incentivise puppy farms since the 2008 collapse, the blame lies at the feet of an inhumane government that repeatedly demonstrates it will bow to various lobbies, placing the profits of some farmers ahead of the rights of animals and society as a whole. Ireland, sadly, has too many examples here:

– the fact we are the puppy farming capital of Europe. We have more than 200 desperately underfunded animals charities mopping up all the unwanted pets while Sweden, a nation of 13mil, has one pound.

– the rapid growth of the unstunned meat sector in Ireland, against the demands of the vet council and every welfare group on the planet 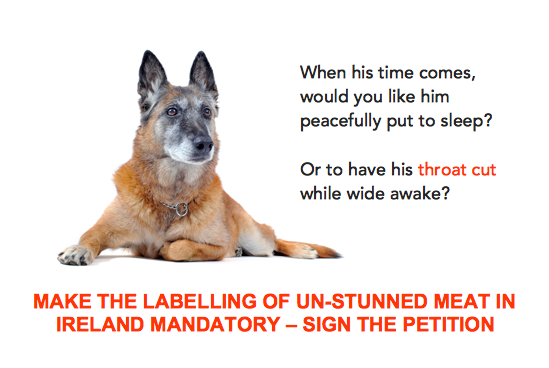 – the export of live Irish cattle to countries with absolutely terrible reputations for animal welfare, where repeated exposés show their fate, hung by single legs while lunatics slash at their throats with dull blades, is among the worst you could imagine for these beautiful animals

– the fact we keep on growing the national herd despite the now very, very, very obvious car crash up ahead.

On and on and on. This is the country we live in. We don’t love animals here. We use them and we abuse them. And profits trump welfare. Always. The real epidemics in Ireland are of callousness, greed and wilful ignorance. I’m truly ashamed of our country and I can only hope the Greens will make a difference over the next few years. First stop is to turn off the f**king tap.

I got this from a Swedish resident under my post, she highlights better than I can what’s going on there:

There is no stray dogs -so no need for pounds- but thats because dogs are expensive. So the prices we see here now during the pandemic are the normal prices you pay in Sweden. So the dog have a value. And due to the regulations regarding how you keep your dogs – puppy farming doesnt excist.

The animal welfare laws states the minimum size for kennels – its all down to the dogs size and how many dogs you have in each kennel. It starts at 2 sqm for ONE chiahuahua….They must either have direct axcess to a outdoor run thats minimum 6 sqm for ONE chiahuahua…
Or you must bring them out on lead several times per day. There must be windows and normal indoor temperature in the building.
You cant use a bitch for breeding before a certain age and not after a certain age. And you must do health checks before using them for breeding. Pups must be vet checked before they are sold and the breeder is responsible for any health issues thats deemed as inhereted(pre excisting) that occurs within 2 years.

You must have a licence for your establishment and you must be able to prove that you have sufficient knowledge to get it. There is also a limit on how many dogs one person can care for- so a larger breedinhg establishment would need staff aswell.

All this makes it non viable to run a puppy farm of the scales that we have here .

People do get rid of unwanted dogs- but they don’t dump them due to being expensive – they sell them instead.

There is one ” pound” in the capital of Sweden that deals with dogs that needs rehoming in that council (not nation wide) – mostly due to the owner being sick, going to jail or similar. Its a charity- so not state/council owned.

Dogs thats been siezed by welfare officers are usually kept in a private boarding kennel that the council have a deal with in the county where they siezed them.

If we could only make the animal welfare law state how dogs in a breeding establishment should be kept- proper sized kennels, human interaction, maximun amount of dogs per person to care for and such- then the puppy farms would be gone as they wont be financial viable

Maxizoo Products: The Good, The Bad and the Ugly!