Raw Garlic is More than Fine for Dogs in Small Doses, it's Very beneficial... 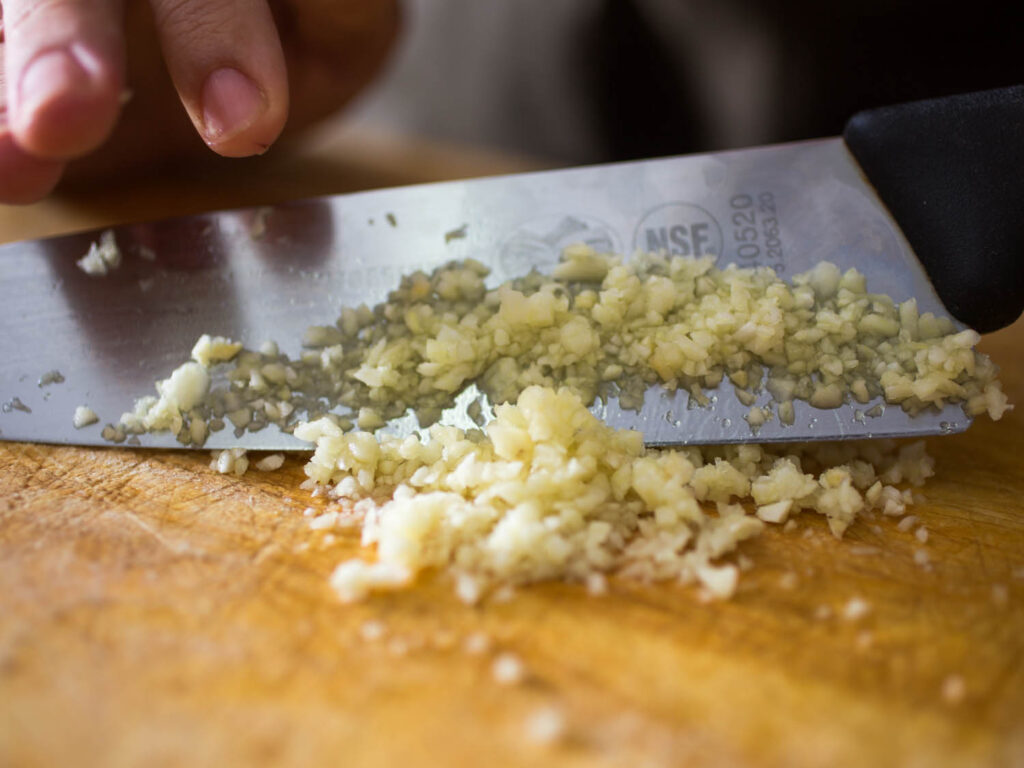 Onions are very dangerous for dogs, the literature abounds with more than enough studies in this respect. We don’t need to spend too much time on that one. However, the same cannot be said for studies of garlic harming dogs. In fact, the only study I can find is a disgusting over-dose study. The only study you will find is an overdose study. It involved a handful of caged labradors where they used the equivalent of 5g of raw garlic per kilo of body weight of dog and found after a week their bloods were wrong. To give the figure some context, if they were using 20kg dogs, that would be 100g of raw garlic per day or twenty whole cloves. Few people are thinking about such doses to an elephant, let alone a dog. That sort of work bears no relevance to the medicinal use of garlic in small doses.

The confusion stems from the fact garlic is from the same family as the onion (Alium). One of the traits of these plants is a high dose of sulfur-based compounds, most importantly here thiosulphate. It can induce haemolytic anemia in dogs, a disorder in which red blood cells are destroyed faster than they can be made. However, in comparison to onion, garlic contains very little of this substance. Hence studies show it’s relatively safe when used in smaller more medicinal doses. There isn’t a single work I can find suggesting otherwise.

[In fact, even when you look at the onion studies you see something similar. For instance, it’s said Japanese breed such as Akitas and Shiba Inu’s particularly susceptible. But the two studies used to support this stance both used a LOT of onions (one of them 200g of onions per dog per day). But this is not to disregard the threat of onion. Never feed any foods contaminated with them].

Benefits of Raw Garlic in Dogs

One of the many magic compounds in garlic is Allicin. It has an incredibly broad range of effects. If you want to nerd out on this incredible compound check out this guy below, really interesting. There’s a second part there too.

There are a great number of well established benefits of raw garlic in humans. I have laid them out below. And yes, you would expect, if it fights inflammation in humans that it would do the same in dogs, that end of things is highly similar across species. That is why vets advise to watch various meds when using garlic in certain dogs (end of article).

For more check out this well-referenced Healthline article on raw garlic benefits in humans.

1. Garlic For Worms In Dogs?

Garlic is leaned on heavily by the natural vet community largely as copious amounts of studies exist showing it is an effective antimicrobial, antioxidant as well as being anticancer, antidiabetic and has an ability to reduce cardiovascular diseases, improving immune functions, but what about for worms in dogs?

Garlic has been used effectively as an anti-helminthic in pigs (Lans et al. 2007, Bartha et al. 2015), ruminants (Lans et al. 2007, Bullitta et al. 2018) and cats. Ronagh et al. (2015) found that cats (n=5) dosed with raw garlic showed a numerical reduction in roundworm eggs on a faecal egg count and a numerical reduction in fecundity rate (number of eggs produced by a female adult). There is some evidence too that feeding raw garlic to dogs is an effective anti-helminthic. Bastidas (1969) treated at a hookworm infestation in a meat-fed dog with raw garlic and tracked the mean daily larvae count (baby worms). You can see it plummets consistently to Day 10. They then stop the treatment and hey presto, straight back up again.

What they found was that garlic is particularly effective on the babies. A big, stubborn adult might be a more resilient to small doses of this natural anti-helminthic. This was verified by the fact that over the course of the 14 days there was little drop in the egg count. That adult can last for weeks in a prime environment so it suggest you should keep this natural treatment up for a long enough period that he too dies off, or combine it with other natural anthelminthics.

Andrei et al. (2011) noted a 90% reduction in eggs per gram of faeces for all 6 species studies (including various roundworms, hookworms and whipworms) following a twice daily weight dependent dose of their worming preparation which included a variety of popular anti-helminthic herbs, garlic and pumpkin seed oil.

You can find a list of natural worming options here.

2. Garlic For Fleas on Dogs?

Anecdotal testimonies abounds online that raw garlic is great to keep the bugs away but supportive studies seem to be almost entirely absent.

Tick bites are a concern for humans and dogs alike. If you are not aware of and taking steps to reduce your exposure to Lyme Disease when walking in the great outdoors, I urge your to read my article on it, you’ll know why from the introduction. A study of 100 Swedish Marines revealed that consuming raw garlic significantly reduced tick bites in the soldiers.

For fleas, a group of researchers in India used very large amounts of crushed raw garlic in the surrounds of a variety of test dogs (this study used nearly a pound of crushed raw garlic in the dogs 3t x 2ft enclosure every second day for a month) and it a preventative effect for fleas was certainly seen. I would suggest this amount of garlic would have been truly awful if not dangerous for the dog to have around too. It’s a typical over-dose approach taken by scientists to see if there is any effect at all before reducing and reducing down to the effective dose. Other works discussing how effective raw garlic is a bug repellant when applied topically to ears of cats and dogs.

And that’s about it! Beyond these sorts of works and a few others that focus on garlic in the environment, in their bedding, in the fields animals graze in, I can’t find a single study that supports the hypothesis that raw garlic has a protective effect from fleas on dogs. In fact, there are a few bad news stories (albeit minor works and pretty old, and on cats) suggesting it’s ineffective (Bowen 1978). Also potentially ineffective for fleas on cats might be brewer’s yeast (Baker & Farver 1983), B-complex vitamins (Halliwell 1982), wormwood (Ihrke 1982), pennyroyal, eucalyptus, rosemary, and citronella (Olkowski et al. 1983). Find these studies in this review of natural treatments for cat fleas here.

If anyone comes across anything, please get in touch, I’d be delighted.

The fact is, fleas on healthy dogs are a rare occurrence normally. Many pet owners go their whole life without seeing a single one. This is one of the reasons we recommend you do not use chemical flea control on a dog with no fleas.

Think on this one – a UK study of 200 children in 2018 found nearly half had been infested with head lice in the past five years. Head lice. Absolutely gross. And what do most parents do to chemically prevent them bar regular hair brushing? Nothing. If we see them we’ll reach for a product to sort it out (the Guardian link above shows us a study in the US in 2016 found 98% of their head lice had developed resistance to most over-the-counter remedies).

Why aren’t parents running scared? Because lice are relatively harmless.

You get the analogy. Obviously left to get out of control you can have an issue but what parent lets their kids go to school each day covered in lice?!

It’s my opinion that fleas on dogs are not only pretty rare but, as they only tend to really infect the weak (very young, very old, sick and dying), they are actually more of a symptom. Your dog has fleas?! Wow, is there something wrong under the hood?

Until then, there are lots of natural solutions for treating fleas on pets. I recommend Diatomaceous Earth. Check it out (a fine dust, it kills mechanically, not chemically, and is safe. Please note: I only sell ziplocks of this stuff, easier much cheaper for you and easier to post. As a fine talc it is messier. Please dust your pet outside).

Got a stubborn ear infection? garlic oil is fantastic. It kills everything – bacteria, yeast, mites. Nothing will survive. Use on it’s own. A good glug on a cotton swab, twice a day. More on ear infections in dogs here!

How To Feed Garlic to your dog

NOTE 1: Don’t Mix the Crushed Garlic into their Food

When feeding crushed raw garlic, leave to the side of the bowl. In line with the best principles of Zoo Pharmacognosy, if they need it they will take it.

This brings up the question – if feeding garlic for ticks, do we give them a choice?!! They’re hardly thinking about that in the future. If I lived in a tick area, I would be probably remove their choice. Mind you, I bet true ZooPharma believers would say that if they picked up a tick bite and a problem from that, wouldn’t they choose to take the garlic themselves? These are the sorts of things that keep me up at night.

NOTE 2: Do not use garlic in dogs taking the following

Chicken or beef allergies in dogs

Where is Your Spirulina From and Why It’s Important…