Waivers for Kennels and DayCares 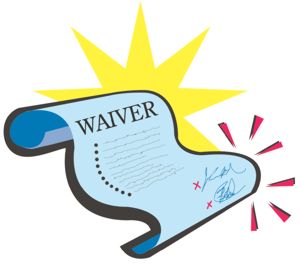 Waivers for Kennels and Daycares…

I think the majority of us on here do not believe in the practice of annually boosting already vaccinated animals, or an entirely ineffective kennel cough “vaccine”, not to mention chemical flea or worm control for animals with no parasites.

The problem for us arises when we need to leave our dogs in kennels or daycare.

For the last few months I have speaking about possible waivers for these premises in that, should you wish to leave your vaccinated (but not annually boosted) dog in with a daycare then they will present you with their T&C’s. If you read them, understand them and sign them, in your dog can go.

To me the average dog owner this sounds entirely reasonable. I’d be more than happy to sign this. If my dog got a cold from a daycare I’d have more cop on than to try and apportion blame on the establishment in an effort to recoup the minor costs incurred.

Not all Kennel Owners are in Agreement…

However, the idea of a waiver has met some opposition. Some of the more common issues kennels or daycares are:

So, I put it out there on a few forums that I was looking for a kennel / daycare owner that might be using such a waiver, and I got a response. Melanie Sora of Doggonit Daycare in Canada. She is using waivers to great success and kindly spared a few minutes for a chat.

Waivers can and do Work, and Many are Using Them…

Melanie has a bit of a background in law. So that’s a good start. Melanie agrees that while the waivers are not bullet-proof in court they are a good start, but they hold a more useful role beyond court cases.

One of my first questions to her was “are you not worried about all the people that will try to sue you for their dog getting a cough”.

In typical law fashion, she cooly responded, “prove it”.

That’s the crux of the law bit. Sure you can go to court but a) you have the waiver and b) it’s so highly unlikely they’d win, considering KC is airborne, as are so many other baddies. A walk in the park will scupper most cases.

When you couple this approach with the fact that, instead of annual boosters, Melanie accepts a blood titre taken every three years (now recommended by the WSAVA, the veterinary governing body), which proves their immunity (where a booster can only assume), it means her clients are fully proofed against the likes of parvo / distemper virus infection, without the need for jabs.

In fact, Melanie forbids any dogs into her place that received a KC vaccine in the last week and a parvo jab in the last three weeks, as during that time they are carriers of the disease and are actually shedding it everywhere they go. This is something most certainly overlooked by many kennel owners today.

Instead, Melanie uses her T&C’s / waiver as a chance to educate her clients as to the true risk-benefit of the likes of KC “vaccine”, boosters etc, and why she doesn’t recommend them. And an educated owner is less likely to prosecute as a result (who sues the creche when their kid gets a cold?!!).

What about dog owners that do want to give all this stuff and don’t like your approach?

What about them, was the answer. There are many, many other places that will take them. You can’t argue with that!

What about your dog license?

As in Ireland, though I stand to be corrected, her license is not dependent on drug use, you simply pay your fee. I can buy a kennel license here in Ireland without answering any questions on vaccinations. What’s more, after speaking with two daycares, they are only inspected occasionally by the dog warden who did not ask about such matters. They were, quite rightly, more interested in cleanliness, safety and welfare. Would like some input from true kennels here.

What about your insurance?

Now, were in Ireland are very wary of our pet insurance companies as some (such as www.petinsurance.ie) will, somewhat odiously, refuse to cover ANY unfortunate happening in your pet (car accident, cancer, fight damage) should you not visit a vet each year (how a vet visit 364 days ago could help prevent a car ACCIDENT in the future is anyone’s guess). Nor do they accept blood titres. I hear Allianz are much more reasonable. Read your T&C’s guys.

But staying with kennels, to get to the bottom of the insurance question for Irish / UK Kennel and daycare owners I called www.petbusinessinsurnance.ie (UK owned, so same applies to you guys). I told them I was setting up a kennels in Wicklow, Ireland, and the girl (Hannah) was more than helpful.

In short, she said if you accept non-vaccinated dogs on to your premises then that illness ALONE would not be covered. Same with Kennel Cough. Brilliant! She had not heard of kennel cough so, for the moment, it’s unlikely they’ll accept that.

I pressed her on the whole “what if the dog hasn’t seen a vet in the last year” bit and she said that has nothing to do with an accident, that you, as a kennel owner, would still be covered for accidents and ever other non-vaccine issue, including public liability. However, it would void any claim for “vet fees”.

It certainly appears it’s possible for Irish / UK kennel owners can use waivers, as Melanie is doing in Canada. Your licenses will not be affected and, should your insurance be taken out with (www.petbusinessinsurance.ie) your non-vaccine issues will be covered too. I need to start getting paid for plugs.

This is very good news. What are your thoughts?!

Below is the waiver / T&C’s Melanie is using
http://doggonitdaycare.com/application-form/

If you would like to know more about vaccinations, what is and isn’t recommend, then check out our article
https://dogsfirst.ie/health-iss…/dog-vaccinations-part-1/

If you would like to know even more about a more natural life for your dog, including vaccinations, herbal remedies and, of course, fresh feeding, then check out our seminar on 23rd April! It’s going to be brill. 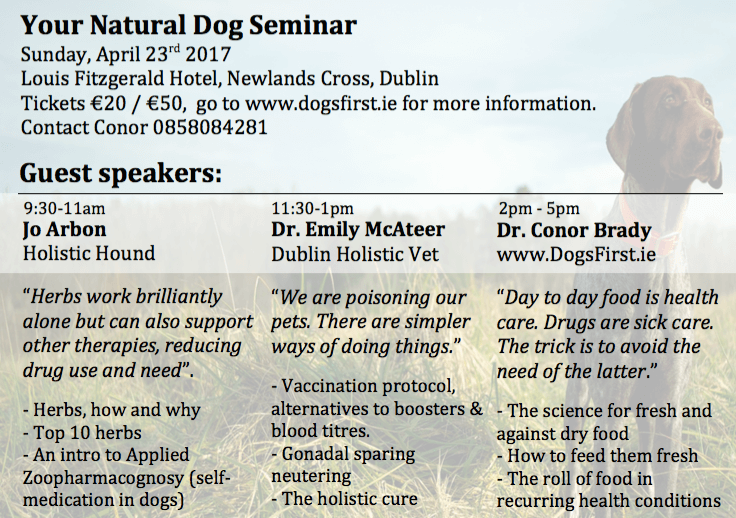