Re the Recent “Don’t Kiss the Raw-Fed Dog After Dinner” Article in the Papers Yesterday, That Advice Goes for a Dry Fed Dog Too, Why do They Keep Missing That? 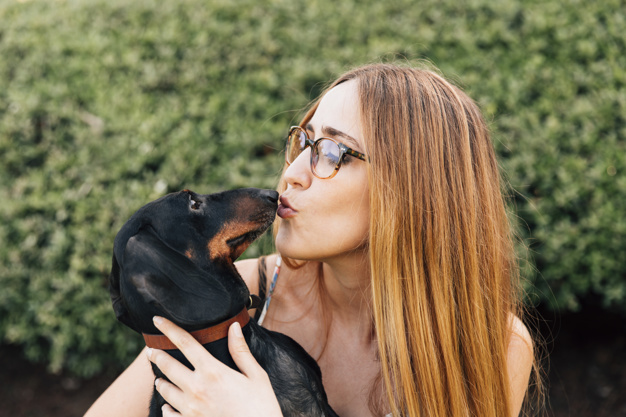 We have compared the safety of raw dog food versus dry food many times before. In short, over the last ten years alone, more than 130 people have been given Salmonella by dry food or their dry-fed dogs. From raw-fed dogs? Only one suspected case. 1 versus 130. That’s the stats as we have them today. With perhaps 30% of dogs now eating some or all raw food, I like those odds.

Do you know that more than half of the 130 people infected with Salmonella from dry pet food in the last ten years were toddlers under two years of age? Where was their warning?

That’s not to say raw dog food doesn’t contain nasties, it absolutely can and the recent article in BMJ adequately highlights that. Raw dog food can be contaminated because our raw meat chain is. There’s no getting away from the fact that approximately 1 in 10 pieces of meat off the shelf of your supermarket will have Salmonella on it, many studies indicating much more, half contain Campylobacter. Yet the powers that be want the raw sector to be cleaner than the human sector. This is a problem as raw dog food manufacturers, for the large part, refrain from using nasty antimicrobial chemicals to achieve this, the way dry food must. Nor do they cook their product. They take bits from the human meat chain, grind and freeze.

Why do people not seem to get poisoned by the odd bad box of raw? Probably because we’re better educated. And still, article after article shows the pet food industry, which is entirely dominated by major dry food companies, continues to highlight the “dangers” of raw.

The fear of contamination approach is the dry sectors most valuable weapon. The result is we have to deal with regular articles that highlight concern over the POSSIBLE risk posed by raw-fed dogs, such as the article yesterday in the Independent. They highlighted a recent study by Swedish researchers that found a number of baddies in raw dog food. The article begins with…

…and goes down the usual route from there.

No mention of the fact people keep getting Salmonella from dry food and no mention of the countless other ways dry food can injure or sicken you or the dog such as aflatoxin, chemical excess, nutrient insufficiency, all of which have not occurred from raw dog food, as they use real ingredients.

No mention of the fact top dry pet food brands such as Hills continue to harm and kill thousands of dogs, with reports of hundreds of dogs dead from as many recalls. This is on a near annual basis. Still not one dog dead from a premade raw. No mention of that.

No mention of the fact dry pet foods continually fail minimum nutritional standards either harming an untold number of dogs. Let’s not talk about that either.

Instead, they do their very best, often using the worst of science, to highlight the possible but as-yet-to-materialise dangers of raw. They hold up the aforementioned study (written by two veterinary students as part of a masters thesis) that shows raw dog food can contain baddies and this is seized upon by our click-hungry media including the BBC and blown out of all proportion using zero balance whatsoever.

Advertisement that links to Amazon:

All That Said, While a Dog’s Kiss is Cleaner than Yours, Please Refrain From Snogging Dogs, Dry or Raw Fed…Taken From my Forthcoming Book…

The Independent article, as most click-bait article from newspaper attempting to tackle the subject characteristically do, fails miserably to delve into the really interesting stuff behind a dog’s kiss. So, I thought I’d give you a lump of my forthcoming book (Raw Science) that deals with this very subject!

Another feared, often cited but less likely vector for infection is a dog licking his bottom and transmitting any germs there to his mouth, ready to lick your face and hands. However, your dog’s mouth is relatively sterile, thanks to an inbuilt oral disinfectant called lysozyme. Lysing means that the lysozyme attaches itself to the cell wall of the bacterium and weakens it until the cell wall ruptures and the bacterium dies. It also contains the enzymes peroxidase, lactoferrin, defensins, cystatins and the antibody IgA, which are all antibacterial, thrombospondin, which is antiviral, as well as protease inhibitors and even nitrates that break down into nitric oxide on contact with skin, which will inhibit bacterial growth (Benjamin et al., 1997; Ashcroft et al., 2000; Baron et al., 2000; Abiko et al., 2003; Ihalin et al., 2006). Hart and Powell (1990) found canine saliva highly effective at destroying Escherichia coli and Streptococcus canis among others.

Interestingly, have you ever seen a dog very cautiously sniff a scrape on your leg? I have. In fact, dog saliva has for centuries been used by many cultures for its curative powers in people (Hatfield,2004). The french have a saying, Langue de chien, langue de médecin, meaning “A dog’s tongue is a doctor’s tongue”, and the Latin quote Lingua canis dum lingit vulnus curat (“A dog’s tongue, licking a wound, heals it”) appears in The Aberdeen Bestiary, a 13th-century English illuminated manuscript. As a dog regularly licks his face and nose, this may appear a safe place to plant a big kiss, but it’s something I would not recommend. Kissing him on the top of his lovely, soft head will have to do.

In fact, when you think about it, it’s kissing another human that you might need to be aware. With nowhere near the protection in our oral cavity our mouths and oral cavities is quite the jungle. It’s estimated that there are over 100 million in every millilitre of saliva from more than 600 different species! Granted most are harmless, like the many sub-species of Streptococcus but in the right circumstances we’ve all had throats infected by them. There there’s Porphyromonas gingivalis from periodontal (gum) diseases as well as Staphylococcus epidermidis and a few Lactobacillus sp. depending on the individual and their oral hygiene. That’s not to mention viruses like good old herpes simplex (cold sores) and his pal the human papillomavirus, as well as a few endearing fungal infections such as oral thrush (Candida albicans).

So, keep that in mind next time you meet your partner at the airport. Go for the hi-five maybe…….then again you don’t want to look too closely at fingers…..

Tomorrow I’m publishing an infographic that compares the safety of raw to dry. You’re going to love it.

In short, take care with your food guys, dry or raw, fresh or frozen. Studies show we humans are getting poisoned in our thousands with Salmonella, E.coli, Listeria, on a daily basis. The top culprit? Fresh fruit and veg!! Not meat. Of course, you wouldn’t go ruling out these vital foods for humans. That would be silly.

Feed dogs raw dog food but please take care. Wash hands and surfaces. Store on the bottom shelf of your fridge. Keep kids away from dogs dinner and pick up regularly after them. Do that and you and them will be more than fine.

Would you feed horse meat to your dog?